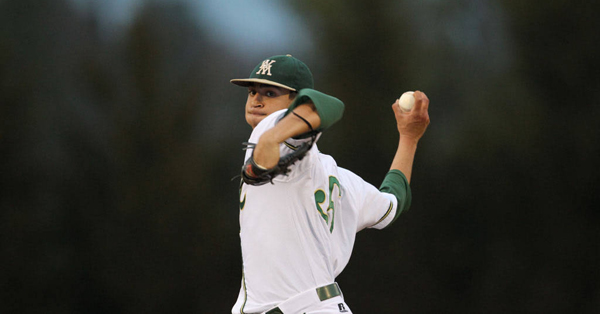 William and Mary completed its Colonial Athletic Association road schedule in losing fashion, falling to Delaware in a sweep at scores of 8-4, 17-14 and 16-8 to drop its conference record to .500 on the season.

The Tribe (19-22, 9-9 CAA) opened the scoring Friday in the top of the second inning. After senior left fielder Devin White was hit by a pitch, junior center fielder Josh Smith singled to center, advancing to second and pushing White to third on an error by the Blue Hens’ (18-15, 7-8 CAA) Adam Davis. Freshman right fielder Ryan Hall plated White with a single. Delaware scored a run on a sacrifice fly in the home half of the frame to tie the score at one.

The Blue Hens took the lead for good with three runs in the bottom of the third off senior left-handed starting pitcher Jason Inghram. After a strikeout and a groundout, Delaware strung together four straight hits, with Gary Jones, Greg Olinski and Ty Warrington each driving in a run. Inghram was able to avoid further damage by striking out Delaware’s Nick Liggett to end the inning.

Delaware continued to pad its advantage, scoring a run in the fourth through seventh innings. The College offense mounted several rallies, scoring runs in the fourth, fifth and ninth, but never pushed the deficit lower than three, ultimately falling 8-4.

Inghram was saddled with his sixth loss of the season, going three and one-third innings while surrendering five runs on 11 hits and two walks, striking out four. Davis took the win for the Blue Hens, pitching six innings of three-run ball, scattering eight hits while striking out five.

Saturday featured heavy doses of offense, as both teams pounded out double-digit run totals. The College took the initial advantage in the top of the first, as sophomore shortstop Tim Hoehn and White each brought home a run.

After each team scored a run in the bottom of the first and the top of the second, the Blue Hens erupted for six runs in the bottom of the second to take a 7-3 lead. After junior first baseman Charley Gould’s error, one of five on the day for the Tribe, resulted in a run, Delaware’s Zach Lopes smacked a grand slam to bring home four more runs. A double off the bat of Diaz Nardo scored Delaware’s sixth run of the frame.

The Tribe didn’t back down, plating two runs in the sixth, two more in the seventh and then rallying for seven in the top of the eighth to tie the score at 14, as Gould, Hoehn and Smith each homered in the inning.

The Blue Hens were relentless, scoring a run in the fifth, exploding for five in the sixth and tacking on another in the seventh. The Tribe didn’t back down, plating two runs in the sixth, two more in the seventh and then rallying for seven in the top of the eighth to tie the score at 14, as Gould, Hoehn and Smith each homered in the inning.

However Delaware put the game away with three runs in the bottom of the eighth off junior right-handed pitcher Joseph Gaouette. Gaouette eventually took the loss after the College failed to rally in the ninth, giving up three runs on four hits in his one inning of relief. Nick Spadafino earned the win for Delaware, allowing one run on two hits in two innings out of the bullpen.

The Blue Hens success with the bats continued on Sunday, overwhelming the Tribe in another impressive offensive display. After the College scored a run in the top of the first, Delaware pounded out seven runs on seven hits in the bottom of the inning, chasing junior right-handed starter Aaron Fernandez after only a third of an inning.

The Tribe responded with three runs in the top of the third, as Hall doubled in a run and sophomore left fielder Matthew Tilley’s single brought home two more to cut the Delaware lead to 7-4.

Each team added two more runs over the next several innings, until the Blue Hens sealed the sweep with another seven run inning in the seventh. Down by 10 runs, the Tribe could only muster two more runs over the next two innings, falling 16-8. Fernandez accepted the loss for the Tribe, giving up seven runs on six hits and a walk. Chad Martin earned the win for Delaware, tossing five and a third innings, allowing six runs on 12 hits while striking out eight.

The College returns to Plumeri Park on Friday to begin a three-game series against CAA opponent College of Charleston. First pitch is set for 7 p.m.