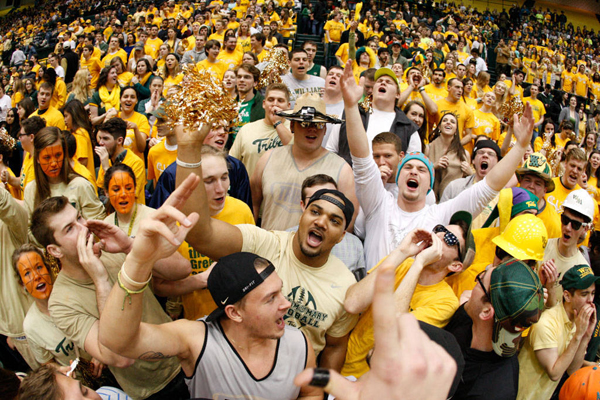 As the 2014-15 year winds down to a close, Tribe Athletics has been working to define proposals and goals for the next five years. April 7, it released its Report of the Committee on Competitive Excellence, a 31-page document about the current and future objectives of William and Mary athletics.

College President Taylor Reveley requested the report, and Athletics Director Terry Driscoll spearheaded the committee as its co-chair over the past several months.

“An appraisal was needed of what it would take to provide our program with resources consistent with those of other programs in the Colonial Athletic Association, as well as resources conducive to a higher level of competitive excellence than we now enjoy,” Reveley wrote in the report’s opening statement.

“The intent of the plan was to state what we are trying to achieve, to recognize some strategic initiatives that would be important if we want to get to these aspirational goals” Reveley wrote.

The April 2015 report builds upon the 2006 evaluation of the role of athletics at the College entitled “The Game Reclaimed: Athletics at William & Mary.” That document, in light of the Tribe leading student-athlete graduation rates among public universities in the United States, pronounced that the College established a healthy balance between its athletic programs and academic pursuits.

Flat Hat Sports sat down with Driscoll to discuss the nuances and implications of the report’s contents.

The report begins by stating Tribe Athletics’ new overarching goal: “a championship experience for every student athlete and every fan.”

“The intent of the plan was to state what we are trying to achieve, to recognize some strategic initiatives that would be important if we want to get to these aspirational goals,” Driscoll said. “It would be an operational tool for us because now we can go to former students and players and say, ‘For your program, here’s what we need for championship-level [competition]’.”

For this report, the Committee of Competitive Excellence was composed of former Tribe student athletes, faculty, members of the Board of Visitors and administrators from Tribe Athletics.

Proposals set forth by the plan include an initiative to maximize athletic scholarships, as the Tribe currently only uses 85 percent of the total number of allowed scholarships by the National Collegiate Athletic Association. The main issue in awarding scholarships is a lack of financial resources. Alumni donate to the William and Mary Foundation, the College’s endowment fund program; many alumni choose to allocate their donations to athletics, with upwards of 90 percent of those specific donations already marked for providing scholarships to certain teams. The Foundation can only account for so many athletes, which is why the Tribe can’t fully support all of its student-athletes with scholarships.

“If we could have anything here, it would be the ability to endow scholarships, because as you know, tuition and costs go up every year and are going up at a fairly rapid pace.” Driscoll said.

“If we could have anything here, it would be the ability to endow scholarships, because as you know, tuition and costs go up every year and are going up at a fairly rapid pace” Driscoll said. “If you look at JMU, Virginia Tech, U. Va, they have the maximum number of scholarships for every sport.”

As the Tribe features 23 sports, more than any other member of the CAA, Driscoll conceded that reaching full utilization of the scholarship allowance might be difficult.

“JMU had 28 sports seven years ago. They cut about 10,” Driscoll said. “They didn’t shrink their budget — they just reinvested.”

Increasing scholarships lies in the report’s section on key operational necessities, along with changes to the recruiting and admissions process and improvements to fan experiences at the College.

On the recruiting front, a new policy implemented this past year divides athletes into a tier system to facilitate the scholarship offering process. Previously, a coach had to submit a referral to the admissions office for any athlete to whom they wished to offer a scholarship. Referrals are limited on a program-by-program basis.

However, this process failed to account for student athletes who would be admitted based upon academic merit alone but still were talented enough to earn a scholarship. Coaches often had to choose between offering a referral to a student athlete who would academically qualify versus another student athlete whose academic qualifications place them on the borderline of general admission.

“For example, we would have this person who we know the College will probably take in April, but won’t take them [at the national signing period] so they’ll have to come in on their own,” Driscoll said. “We’d have to wait and make a decision, and in that period they might go someplace else.”

Essentially, coaches would lose academically accomplished recruits to other programs due to this wait-and-see process of general admission.

As the report’s mission statement clarifies, the fan base of Tribe sports plays a crucial role in the strategic goals and receives its own section within the future plans. At the core of this section, the report states there is a need for improved game day experiences. This is part of a larger Tribe Athletics idea for the so-called Championship Experience.

By fiscal year 2020, $3 million per year is proposed for spending on operations and staff of $8.1 million total projected resources for Championship Experience. The increased financial resources are tied to growth expectations in alumni donations. Operating budgets include equipment, travel and games. In games, much of the money will be put into marketing in order to bring in more fans from the student body and local population and keep those fans entertained during events.

“We haven’t been able to invest much into marketing,” Driscoll said. “[The funds] would be everything from marketing to … having events that would draw fans out and make it a more fun experience. Unfortunately, athletic events have to be entertaining to people. Even when the ball isn’t bouncing, people want to be entertained. It’s a large number and would be divided out over the different sports.”

Looking at examples such as the men’s basketball Gold Rush game Jan. 24, Tribe Athletics plans to move forward with increased promotions to amplify the size of the fan base and create an identity for the College as a school that supports athletics. These promotional funds are required to be spent in a gender-equitable manner across sports programs in accordance with Title IX.

“We don’t have a secret [to increase student attendance], but it’s the hope that if we can produce more championship experiences, the type of games that kids want to come to, it would be a catalyst for the person who is not a sports fan but wants to be part of this experience of Tribe Pride and the school coming together, and again that falls to us to make those games,” Driscoll said.

While operational necessities are at the forefront of the Tribe’s priorities, the report also details transformational changes to athletic infrastructure and increasing the pool of alumni donors.

Transformational changes to infrastructure include a multi-sport practice facility, a stand-alone swimming facility and renovating or replacing Kaplan Arena.

The practice facility would provide ample space in a location to be determined, but likely near Plumeri Park and Albert-Daly Field, as an alternative to having multiple teams compete for space in Kaplan Arena with each other and with other College programs such as concerts or speakers. Currently, five teams with overlapping seasons practice in Kaplan Arena. Sports medicine and academic aid also operate in the complex.

“We don’t have a secret [to increase student attendance], but it’s the hope that if we can produce more championship experiences, the type of games that kids want to come to, it would be a catalyst for the person who is not a sports fan but wants to be part of this experience of Tribe Pride and the school coming together.” Driscoll said.

“Not only does [the practice facility] impact the two basketball programs and volleyball, it would also help men’s and women’s gymnastics,” Driscoll said. “It also would give us a larger sports medicine area and a larger academic support area that every student athlete could use.”

Recently, the men’s swim team won the CAA for the first time in its history, yet it competes at the Campus Recreation Center instead of an independent location. Due to facility limitation, the Tribe diving program does not exist today, as divers would have to travel to Christopher Newport University to use the facilities there. The report calls for construction of a swimming facility to accommodate this dilemma.

Renovation or replacement of Kaplan Arena is mentioned, but more so as an idea to examine rather than to act upon at this time. Certainly, more of the fundraising initiatives with alumni would have to pay off prior to this consideration. Tribe Athletics now continues to examine the arena’s structure and usage over the next few years to determine if action needs to be taken.

“[Kaplan Arena renovations are] in there with the idea that at some point there’s going to be a need to do something on the site, but it’s not immediate,” Driscoll said.

He mentioned that facilities estimates another 25 years of useful life for William and Mary Hall.

The fourth transformational component involves increasing alumni donations in order to fund many of the proposed changes. As it stands in the report, the new athletics buildings and renovations would cost in the range of $100 million. 2,100 former Tribe student athletes donated to Tribe Athletics in 2014, and the report shows potential for growth as the program builds up donation prospects.

Such an ambitious proposal will face many hurdles if it is to be fully implemented. However, tangible changes and developments in areas such as scholarships and marketing are slated to come into effect next year, and upgrades to facilities such as the indoor multisport practice facility are already in the early planning stages.

Though he admits goals set out are both highly varied and formidable, Driscoll believes the report is a step in the right direction.

“This is the first time we’ve had a real formal statement laying out what William and Mary athletics is all about and what it’s aspiring to and where we want to go and what we think we need to get there,” he said.