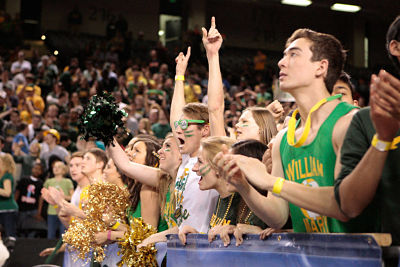 We’ll call this “Sports Orientation”_– prepare yourself to receive loads of information in a short span of time. This is just like regular orientation, except without the screaming OAs.

As the newest additions to the William and Mary family, there are a few things to know about rooting for the College. We want you to know when to scream in victorious ecstasy or weep in mourning at a defeat. And most of all, we want you to appreciate the unique aspects of being a Tribe fan.  Write this stuff down, it’s important. Or, you know, just keep this article, since I already wrote it down.

No.1) Quality of Play – The College’s 23 varsity sports are all NCAA Division I athletic programs. Yes, it’s true. This small liberal arts college of roughly 8,000 students nestled in the cozy confines of scenic Williamsburg recruits and trains Division I student-athletes. In short, these athletes are good. If you go to Kaplan Arena and see junior guard Daniel Dixon of the men’s basketball team sink a three pointer, that is a Division I shot. If you are cheering on the women’s soccer team and senior forward Samantha Cordum fires top-corner for a goal, that’s also a Division I play. Tribe sporting events are truly a special opportunity to bond with classmates and support our sports programs while watching high-quality collegiate athletics.  If our student-athletes appear talented, that’s because they are. This year, the Tribe was the only school outside of the Power Five conferences with players drafted by the NFL, MLB and NBA, further showcasing the skills of our student-athletes.

Tribe sporting events are truly a special opportunity to bond with classmates and support our sports programs while watching high-quality collegiate athletics.

No.2) Upsets­­ – Though William and Mary is Division I, our football program has the additional distinction of Division I-AA, whereas bigger schools such as Virginia Tech and University of Virginia are simply Division I-A. In short, the Tribe is part of the Football Championship Subdivision rather than a Football Bowl Subdivision team. For those of you who possess some degree of football acumen, this should resolve any confusion about how William and Mary received votes to be in the preseason Top 25. No, the College did not receive votes over Tennessee or Mississippi State. We are just in different polls.

On the plus side for football, we are the major underdog in every game that we play against a FBS team. A victory is a one-way ticket to an ESPN special report and national recognition. Division I-A schools generally don’t have that hype. If Division I-A member University of Illinois is having a terrible season, a victory over another Division I-A team won’t receive any national recognition unless that team is ranked, and ranked teams tend to be pretty good. There are only 25 ranked teams to upset; the Tribe has its choice of 125 FBS teams to upset. Do the math and cross your fingers, the College plays UVA on September 19 in Charlottesville.

Upset opportunities are plentiful outside of football as well. The College competes in the Colonial Athletic Association, which is commonly referred to as a mid-major conference. Major conferences include the Atlantic Coast Conference and South Eastern Conference. CAA William and Mary defeated No. 1-ranked University of North Carolina at Chapel Hill of the ACC in men’s soccer in 2013. When the CAA beats an ACC team, you’ve got yourself an upset. And it’s an even bigger deal when it’s over the top-ranked collegiate squad in the nation.

No.3) Fewer Scandals – Remember the whole crab-leg theft at Florida State? Or how about that massive cheating scandal at UNC-Chapel Hill with the fake classes? At William and Mary, the seafood is always paid for and the classes are always real (though occasionally obscure). It may seem trivial, but when stupid stuff happens at one’s alma mater, the students are affected. At worst, employers may question the value of a recent graduate’s degree; at best, the new hire will be asked awkward questions by awkward coworkers who just learned about where the person went to college. As one of eight “Public Ivy” schools, the Tribe recruits student-athletes based on character as well as talent. The Tribe graduates 100 percent of our athletes in 12 programs, 91 percent of football players (compared to 65 percent nationally) and 92 percent of our basketball players (compared to 62 percent nationally.) Our student-athletes are students first and athletes second. We do college athletics the right way.

With all the college expenses already stacking up (books and laptops and….I’m forgetting a minor one…. Tuition), the Tribe does not want to extend your financial burdens to include your fanhood.

No.4) Pricing and seating – Every home athletic event is free for students. If you’re looking for something to do on the weekend, Student Assembly funds a van to provide free rides to go watch free Division I soccer games. Zable is free, Kaplan is free, and transportation to home games is free. There is no points system like at UVA; you don’t have to order football tickets months in advance like at Virginia Tech. With all the college expenses already stacking up (books and laptops and….I’m forgetting a minor one…. Tuition), the Tribe does not want to extend your financial burdens to include your fanhood. And you will never have that experience of ordering season tickets for football and then realizing you have to take a Saturday class at 1 pm. That must be terrible.

No.5) Tradition – The College has been here awhile. The Tribe and the University of Richmond share a rivalry dating back to 1896, and even back then, the Tribe was 203 years old. School records still get broken, though some have stood for over half a century. From a national title in men’s tennis in 1948 to five CAA championships in 2015, William and Mary athletics sustain the tradition of excellence on the fields and courts, while maintaining the integrity of the classroom. It’s a special kind of tradition. Welcome to the Tribe.