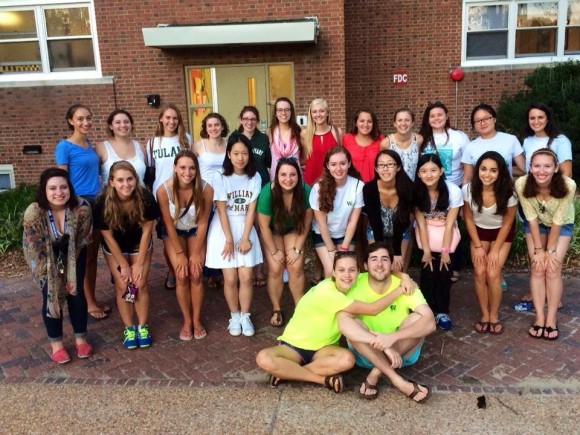 Despite the fact that my freshman orientation was only a year ago, I remember about five percent of the information shared during my first days of college. Instead, what stands out among the lessons on MLA style and making “Tribe Choices” is a common aspect of adjusting to a new environment: getting-to-know-you activities with the other members of my freshman hall.

The day after move-in, my hall settled in our lounge to play the name game, an icebreaker classic. For those of you who have never been forced to engage in this activity, the name game involves individuals sitting in a circle and sharing a descriptive adjective starting with the same letter as their name (i.e. Awesome Allie). Our OAs acknowledged the silliness of this activity but assured us the monikers we gave ourselves would create friendships and remain ingrained in our memories until graduation.

Our OAs acknowledged the silliness of this activity but assured us the monikers we gave ourselves would create friendships and remain ingrained in our memories until graduation.

Heeding this advice, I tried to find an adjective that fully captured the essence of who I was. Magnificent or magical wouldn’t work, as I worried I’d sound full of myself if I picked an adjective proclaiming my greatness. Musical would’ve worked well, but someone else in my hall used it first. Finally, I settled on the only other “M” word I could think of: mellow. I thought this word would connote an aura of serenity that would somehow help me make friends with this room full of strangers.

In a hall of 26 girls, my adjective fell somewhere in the middle in terms of atypical qualities. We had a few common words you’ll find in every name game, like “kind” and “terrific,” and several more unusual adjectives, like “lurid” and “colloquial.” By the end of the game, I knew all of my hallmates by name, and I felt like I had learned something about people’s personalities by the words they chose.

Fast forward to the end of freshman year, and I could tell you almost nothing about orientation. My vague memories of those days are sweaty walks to Phi Beta Kappa Hall in Williamsburg’s August heat, an overwhelming daily schedule packed with edifying sessions and interactions with a plethora of people I never actually talked to during the school year.

The aspect of orientation that seemed to last beyond those five days was, surprisingly, the name game. As my hallmates and I became friends, we found ourselves discussing the labels we’d chosen and admitting, for the most part, they had very little to do with our real personalities. Soon, our name game adjectives became running jokes, with friends pointing out that my tendency to stress out makes mellow one of the least truthful words you could ever use to describe me.

I met many people throughout the year who weren’t in my hall, and somehow we always ended up sharing the names we had given ourselves in the game. A boy from upstairs described himself as jolly, and another one who had misunderstood the activity used tennis as his adjective. My friend who, as an OA, has played the game multiple times, called himself youthful during freshman orientation. Two years later, he tried out the adjective yummy in an effort to garner laughs from his hall. They didn’t laugh.

Yet the name game is still what stands out amongst the cacophony of orientation, and I know that, as my OAs promised, I’ll remember the adjectives people used long after graduation.

In the grand scheme of freshman year and my time at the College of William and Mary, the name game was largely inconsequential. The girls in my hall weren’t actually kinetic or lurid, and as time passed, I grew to know them more by the memories we shared than the labels we’d given ourselves months ago. Yet the name game is still what stands out amongst the cacophony of orientation, and I know that, as my OAs promised, I’ll remember the adjectives people used long after graduation.

As I prepare for life as a new student once again (or, as they say at the University of St. Andrews, “fresher”), I’ll miss everything the class of 2019 will come to love over this next year: the beautiful nature paths along Lake Matoaka, late-night WaWa runs and the deafening silence of third floor Swem. Most of all, I’ll miss my kind, musical, enthusiastic, terrific and lurid friends.