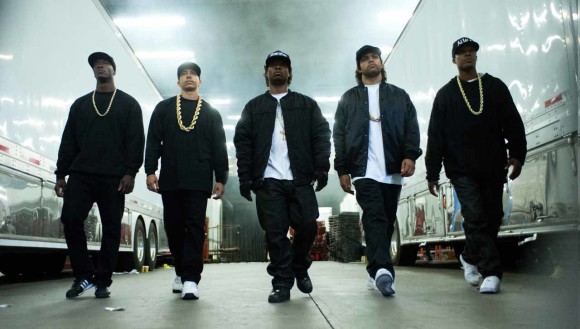 “Straight Outta Compton” is a biopic directed by F. Gary Gray about the infamous rap group, N.W.A. Gray begins by introducing each member of the group: Eazy-E (Jason Mitchell) is presented in a high-octane scene staged in a crack den, and Ice Cube (O’Shea Jackson Jr., the real Ice Cube’s son) makes his first appearance in a prolonged and equally intense scene on a school bus, where he is jotting lyrics in a notebook observing what his surroundings. Fittingly, we first meet Dr. Dre (Cory Hawkins) lying on his bedroom floor, jamming out to records with headphones on. MC Ren (Aldis Hodge) and DJ Yella (Neil Brown Jr.) both appear in club scenes non-central to their own characters.

As we follow the group’s rise to fame and subsequent implosion, we get to see how the album “Straight Outta Compton” came into being with several scenes in the studio. We get a glimpse of the group’s hectic life on tour, involving run-ins with the police as well as hotel room shenanigans with topless women and plenty of guns. Another major component is the presence of Jerry Heller (Paul Giamatti), the group’s controversial manager. As a result of contract disputes and weak friendships, N.W.A. crumbles and the film breaks into three different storylines: the career trajectories of Ice Cube, Eazy-E and Dr. Dre. MC Ren and DJ Yella simply fade into the background.

Gray chooses to pursue many different paths and consequently commits to none of them.

“Straight Outta Compton” is entertaining, well acted and interesting enough to stick with as a random movie found while flipping channels. But the film is lacking in any greater meaning, and vital questions are left unanswered. Gray chooses to pursue many different paths and consequently commits to none of them. The story of N.W.A. can’t fit into two and a half hours; there are simply too many important characters. Gray explores two of them with extreme brevity, and gives the audience just a taste of what happened to the three more prominent members.

Some of the most important events were left half-baked. Ice Cube releases two solo albums in what feels like five minutes, while Suge Knight bursts onto the scene as an unknown to the audience. In an instant Eazy-E loses what appears to be all of his money, and his trust with Jerry Heller is shattered over reasons that are barely referenced and never fully explained. I still don’t know what happened. In all seriousness, this topic would have been better documented in a miniseries if the goal of giving each character his due was to be fulfilled.

In all seriousness, this topic would have been better documented in a miniseries if the goal of giving each character his due was to be fulfilled.

Gray is at his best in the opening scene introducing Eric “Eazy-E” Wright rolling into a crack den to collect on some unpaid debts. At this point, Eric is a drug dealer, and this is simply part of his job. The location is Compton, an area in Los Angeles known for its poverty and crime. For the viewer, this house is a nightmare; a dilapidated shack filled with sweaty drug addicts, graffiti and empty 40 ounce liquor bottles. For Eric, this apartment is commonplace; it is part of his reality. In many ways this particular scene feels bigger than itself. There is an atmosphere of desperation and frustration in the house, and more broadly in the streets of Compton. Gray manages to establish Eazy-E as a character, while showing us the overall surrounding.

A prominent element in the film is the tumult in and around Los Angeles during the time period. There are several scenes depicting police brutality, unfair arrests and mounting tensions. Gray also chooses to show footage of the Rodney King beating and the subsequent trial and riots that followed. N.W.A. was the voice of one side of these events, yet the narrative never explores the bigger picture.

In this iconic photo from the riots in Ferguson, Missouri, you can clearly see a group of police officers taking aim at a black man with his arms up. Also in the photo is a subtle, yet powerful indication of the influence of N.W.A. – the lyrics “Fuck tha Police” spray-painted onto a mailbox in the background.

No matter where you stand on race issues, no matter your political beliefs, one thing is undeniable: N.W.A. struck a note of frustration that is still prevalent today. Their lyrics are a testament to their “reality” and they still echo. It is unfortunate that “Straight Outta Compton” settles for amusing yet unfulfilled storylines instead of tapping into the soul of the same nightmarish realities that haunt America today.