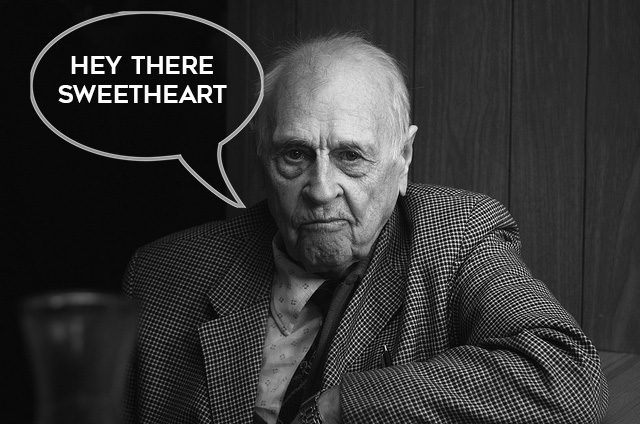 While on a biweekly basis, I like to think that I usually fill the role of your sassy, crude, yet well-spoken sex-obsessed pal. Today I’m wearing a different hat. Don’t you worry, the sass is still here, and there will hopefully be no shortage of crude language. Just think of me as your wise older sister or mom for the next 600 words or so, because it’s time for me to impart some advice to your over-worked twamp minds.

It has come to my attention that there’s a new trend sweeping through young Hollywood, and I’m concerned that it may soon find its way into the homes and hearts of those in attendance at this wondrous institution. No it’s not waist cinchers or butt implants — although I would definitely advise against those. “But then what, kind friend and mentor, is this new craze you speak of?” you may ask. The trend, my friend, is engaging in romantic and sometimes sexual relationships with those vastly younger than you.

Now, I know young celebs like Kylie Jenner and Bella Hadid have been coupling up with 25-year-olds recently, but that doesn’t make it okay. Let’s remember that the rumors of Kylie and Tyga’s cuddling up began when Kylie was just 17.

I don’t know how the laws work over in Hollywood, but I have done a little bit of research about the statutory rape laws here in Virginia. Virginia law states that engaging in sexual acts with a minor, even if it’s consensual, can land you in at least a year of jail time. Despite the fun the ladies of “Orange is the New Black” seem to be having behind bars, I can guess that those orange jumpsuits aren’t as forgiving as they appear on screen.

I don’t know how the laws work over in Hollywood, but I have done a little bit of research about the statutory rape laws here in Virginia.

I know that here, at William and Mary, the likelihood of falling for a minor is much less likely when you’re surrounded by similarly-aged college students. But it is also likely that you might find yourself swept off your feet by someone more than a few years your senior. While often age is but a number, as a gal pal with your best interest in mind, I’d advise caution.

College is a prime time to explore things: academically, socially and sexually. And do you know what gets in the way of this freedom, exploration and self-discovery? Coupling up with a significant other who is way older than you. If your boy toy or lady friend is much older than you, chances are their life is in a totally different place than yours is. While your biggest worry is the chemistry exam tomorrow, their head is filled with stress over no longer being covered by their parents’ insurance and with finding a full-time job. Sometimes, this different perspective is nice, but other times it can force you into thinking about your future in a way you’re not prepared for.

If I could offer you one last ounce of advice, it would be to be wary of those older suitors who love to talk about how much older than you they are. When your beau spends a majority of their time pointing out how much their age makes them more knowledgeable, trustworthy and intelligent, take note. The difference in age can be an avenue for your cutie to talk down to you and feel superior — which is so very uncool and not okay.

As my dearest roommate has pointed out, I shouldn’t play the blame game for every older S.O., but sometimes I worry that some of you readers, friends and (dare I say) fans may be hopeless romantics like myself. It’s easy to get caught up in your own feels when you’re dating someone tall, dark and maybe a little more mature. Relationships are great, when they’re consensual, happy — and legal.

Your pseudo-big sis is signing off for now. Don’t fret, your favorite sassy sex lover of a columnist will be back next week, hopefully with an exciting story or two.

Mallory Walker is a Behind Closed Doors columnist who likes her men mature but not ancient.