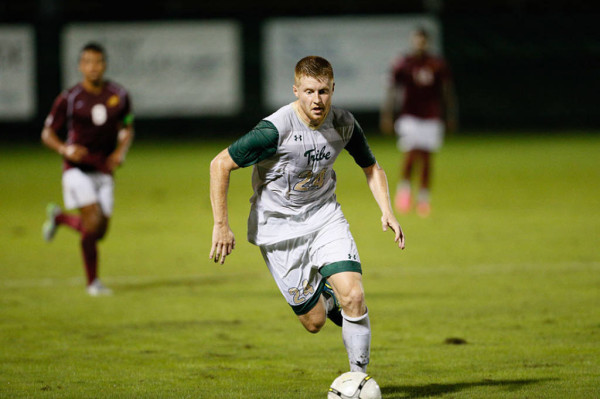 In the 25th minute, Elon head coach Chris Little glared across the pitch and weighed his options for turning the tide of the game. William and Mary had simply outplayed nationally ranked Elon all night, and Little found himself out of adjustments and turned to the oldest form of motivation in the book — ordering the entire bench to warm up.

As the relatively dry Phoenix backups frantically ran high-knees up and down the sideline, the upset bid of No. 10 Elon (8-2, 2-1 CAA) transitioned from faint hope to rock-solid reality as the Tribe (4-3-1, 1-1 CAA) soaked the Phoenix in first-half shots in a 4-1 Colonial Athletic Association triumph on a rainy Wednesday night at Martin Family Stadium.

With a 7-1 shot advantage over the first half, the College offense racked up two goals to sprint ahead of the Phoenix. Senior midfielder Ryan Flesch notched the first goal — a free-kick fluke that bounced prior to hitting the back of the net in the 17th minute. Flesch appeared as stunned as the Elon keeper, as no other player touched the ball, although two Tribe forwards had dashed across the net attempting a header and had briefly blocked the goalie’s view.

“We were very fortunate to get the first goal, but on a night like tonight where the ball is skipping a lot, you just try to get the ball into dangerous areas and hope something good happens,” Norris said. “Ryan Flesh is very good in those situations, he whips a heavy ball in and it’s difficult to clear even if we don’t get the first touch.”

However, the College’s second goal proved that the College didn’t plan on just getting lucky all game.

Freshman midfielder Marcel Berry registered the first of three assists in the 25th minute, feeding the ball to senior forward Jackson Eskay right at the top of the keeper’s box, who turned and fired a hard skipping shot to the left corner.

The Tribe continued to pressure Elon for the rest of the half, with the visiting team creating few opportunities, playing at a sluggish pace. Redshirt junior goalkeeper Mac Phillips rushed out to preemptively pick off crosses or scoop up through balls on a few occasions, but had a relaxed half courtesy of the College defense.

With the start of the second half, the storm began to build up intensity in sync with each team’s offense. The Tribe fumbled two opportunities in the first five minutes while Elon doubled Phillips’ save total in the 39th minute. A weather delay was called at the 58th minute for lightning, which would last for half an hour.

“Being ahead in a game, you don’t want that situation to occur,” Norris said. “It was a tricky situation mentally because we needed another 12 and a half minutes for an official result.”

Per NCAA rules, 70 minutes have to be played in order for an official result to be registered.

Fortunately, the Tribe was able to resume its bid for the first conference victory of the season, and the first upset of a top 10 team since a 1-0 2013 road triumph over No. 1 North Carolina.

When an Elon penalty kick sailed over the net at the 66th minute, the Phoenix’s fate was sealed.

The College added two more goals, both assisted by Berry. Berry worked down the left side and crossed to freshman forward Antonio Bustamante in the 76th minute. Bustamante edged past his defender and hit the far corner with a low shot for the 3-0 lead. Just three minutes later, Berry repeated the act, this time maneuvering around four defenders en route to a pass to Eskay.

Eskay body checked his defender out of the way and put the finishing touches on the victory with a hard shot ricocheting into the net off the base of the far post.

“Marcel’s a really quick, talented player,” Eskay said. “He has these bursts where he’s gonna put a few players out of the play. After he put three defenders behind him, I was able to put [the shot] away.”

With nine minutes left in regulation, Phillips slipped and fell down in Elon’s only goal of the night. But having the final goal and the final say were two different things Wednesday, as the Tribe thundered to a 4-1 statement victory in the CAA.

“I would hope that this gives us the confidence that we can be more consistent defensively,” Norris said. “I would [also] hope that it continues to give confidence to our attacking players that they will create chances and get goals.”

Up next for the Tribe is another home conference matchup against No. 23 Hofstra Saturday at 7 p.m., weather permitting.