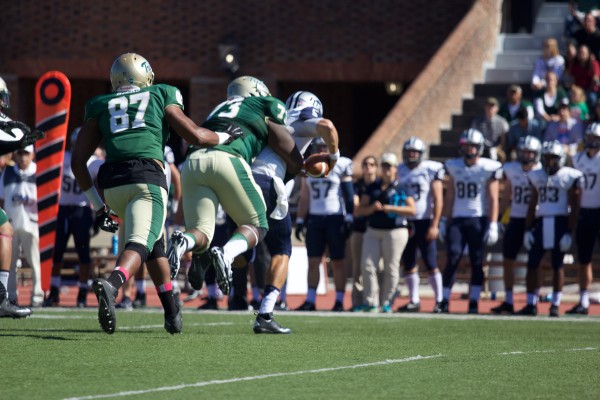 Coming into Saturday with last week’s huge win at Villanova, I expected William and Mary football to perform at the same level or better against New Hampshire at home. The Tribe delivered for the most part with another strong performance for the second consecutive week against a nationally ranked opponent, despite making early concessions as well as suffering a significant injury.

The game started with the Wildcats looking better than the home team as the College’s special teams unit surrendered a 90-yard punt return for a touchdown just over four minutes into the game. The Tribe was outmaneuvered and outplayed in its coverage of New Hampshire’s Casey DeAndrade, stirring fans’ fears of an impending blowout.

However, that blowout never came. Instead, the College defeated its second consecutive set of Wildcats 34-18 with players stepping up in all facets of the game.

In terms of yardage, the offense racked up 325 yards rushing of its 470 total yards, where New Hampshire had 127 yards rushing and just 281 total offensive yards.

Junior quarterback Steve Cluley had some difficulty throwing deep to his receivers, but the running game more than compensated for the deep ball deficiency. With the surging force that is junior running back Kendell Anderson — who was named the Colonial Athletic Association Offensive Player of the Week — as well as key carries by senior tailback Mikal Abdul-Saboor and Cluley himself, the College ran amok over the visiting Wildcats. In terms of yardage, the offense racked up 325 yards rushing of its 470 total yards, where New Hampshire had 127 yards rushing and just 281 total offensive yards. Anderson and Cluley each picked up a pair of touchdowns.

Cluley has already shown much more awareness in scrambling plays compared to last season and even earlier this fall. While Abdul-Saboor was still limited and only ran for 68 yards, Anderson picked up the slack with 174 net yards. The Tribe leans heavily on its rushing and should continue to do so, especially given the strength of the offensive line that was successful in creating opportunities for big plays Saturday.

Though not to be overshadowed, the receiving corps was essential to creating first downs, as well as a touchdown via a 30-yard reception by sophomore wideout DeVonte Dedmon. New Hampshire’s defense covered Cluley’s passes steadily through the game, illustrating a need for innovation in pass playcalling.

Even when William and Mary didn’t hold the ball, it managed to dominate the game. Despite the errors with special teams in the first quarter, the group shined under senior safety DeAndre Houston-Carson — this week’s CAA Special Teams Player of the Week — as he had a blocked punt and a blocked field goal that both set up Tribe touchdowns. Houston-Carson transitioned from cornerback to safety for his final collegiate season, but he remains on top of his game and leads the defense with not only a pair of blocked kicks but a pair of interceptions and 27 solo tackles in six games.

Houston-Carson transitioned from cornerback to safety for his final collegiate season, but he remains on top of his game and leads the defense with not only a pair of blocked kicks but a pair of interceptions and 27 solo tackles in six games.

After New Hampshire took the lead on the 37-yard connection early in the second quarter, the Tribe buckled down for the long haul and only gave up a field goal the rest of the game. No matter how much the offense scores, a bad defense can break up a potential win — the College had no issues with that for most of Saturday’s game. For proof, look to the stats — five sacks, nine tackles for loss and two interceptions. Facing one of the conference’s best quarterbacks, Sean Goldrich, and putting up those numbers shows that the Tribe could really have something special with this year’s squad moving forward into the second half of the season.

However, one thing does put a damper on an otherwise significant win, and that is the injury of senior linebacker Luke Rhodes. After senior outside linebackers Ian Haislip and Zach Fetters were out of play due to injuries sustained at U.Va, the star of the unit and the last of the College’s preseason starting linebackers to stay upright, is now out for an undetermined amount of time with a leg injury. He was taken out before the half and put on crutches during the break. With him gone, Goldrich immediately began targeting screen passes to Rhodes’ domain of coverage. Though the defense has Fetters back in the lineup and has performed respectably as a unit, the injury of a team captain has got to be a demoralizing factor on the back burner of the victory.

One thing does put a damper on an otherwise significant win, and that is the injury of senior linebacker Luke Rhodes.

Based on Saturday’s victory, the second upset of higher-ranked teams in as many games, the only remaining challenges moving forward are James Madison and Richmond, both of which are undefeated in CAA play before they face each other next week.

At the midpoint of the season and heading into a heavily-favored Homecoming against unranked Hampton, I optimistically predict a playoff appearance this year provided the team stays healthy on defense and consistent on offense.