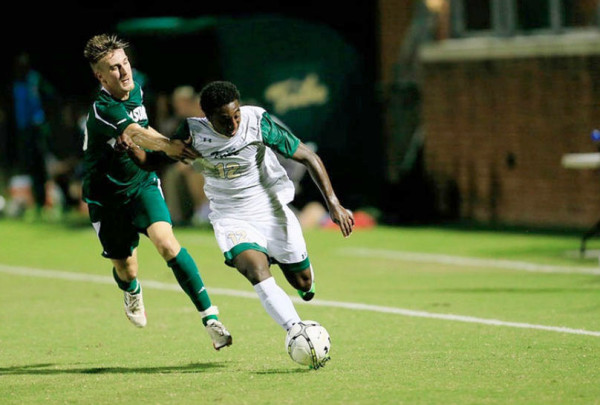 William and Mary started strong Saturday, ultimately dismantling a much weaker opponent in Drexel during an important conference road game. The Dragons (2-13-1, 1-6-0 CAA) stood no chance, as the Tribe won in a 3-0 shutout to improve to 6-7-2 (2-5) on the year.

From the start, it was clear that Drexel could not handle the William and Mary attacking front, led by senior midfielder Jackson Eskay, often supported by a pair of freshmen: midfielder Marcel Berry and forward Ryder Bell.

Eskay was aggressive from the start and challenged Drexel goalkeeper Tyler Afflerbach in the third minute. Afflerbach managed to save Eskay’s shot, as well as one from Bell moments later.

The breakthrough came in the eighth minute, when Berry made a beautiful run down the left sideline. He cut across the box, finishing with a well-placed shot that found the left side of the net. With this goal the Tribe led 1-0 with no signs of slowing down.

The offensive bombardment continued as Bell rocketed a shot from the left side of the box that gave Afflerbach everything he could handle. The Drexel goalie made an impressive diving save to keep the College from doubling their advantage.

Eskay extended the William and Mary lead when he scored a beautiful goal in the 36th minute. Junior forward Reilly Maw sent a well-placed cross from the right sideline. Eskay corralled the pass and faked a shot. The fake gave him the right amount of time he needed, as he composed himself and curled a ball that landed in the bottom right corner of the net. With this goal the Tribe led 2-0 and the possibility of a Drexel comeback grew much weaker.

The Dragons couldn’t produce nearly the same offensive success. They managed only one shot on goal in the first half, which was saved by junior goalkeeper Mac Phillips in the 45th minute.

As the second half began, the Tribe had to be careful not to be overconfident and allow room for a Drexel comeback. Showing that they have become more consistent as a team, William and Mary held strong to start the half and continued their high level of play.

Eskay doubled his goal tally when he scored in the 58th minute. He dribbled skillfully into the box and unleashed a powerful shot that flew in just under the crossbar for a 3-0 Tribe lead.

Even with a three-goal lead, William and Mary was relentless in their attacking. In the span of a minute, the Tribe forced Afflerbach to make two saves. Freshman Christian Jones fired the first shot and Eskay had the second.

For a team that has not been the most consistent, the relentlessness of the attack was impressive.  The Tribe showed they could maintain a high level of play for longer than just a few minutes or a half, which has been the case in other games.

William and Mary finished the game with 10 more shots than Drexel (21 to 11) and 10 more shots on goal (13 to 3). The Dragons finishing with just three shots on goal is a testament to the strong Tribe defense, which prevented any significant offensive developments for Drexel.

Phillips confidently handled all three shots he faced, and as a result was rewarded with his second shutout of the season. Phillips has been consistently impressive over the years, as this was the 11th shutout of his career.

“We are very pleased with tonight’s performance and happy to get a result,” Norris told Tribe Athletics. “We were able to get a shutout, which was important for our group.”

William and Mary looks to carry this momentum into their next match, where they hit the road to face VCU on Oct. 28 in Richmond, Va. The game is scheduled to kick off at 7 p.m.