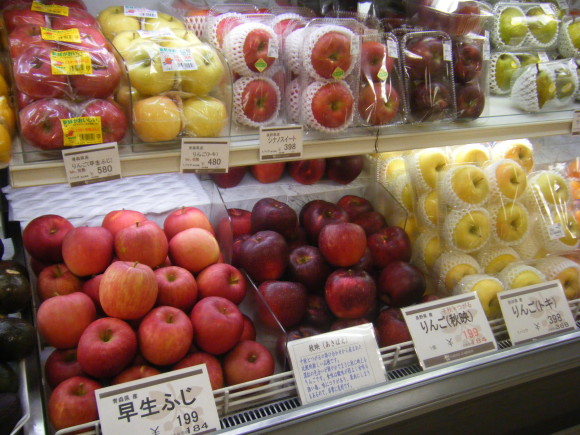 Here’s something I did not expect to miss while in Japan: apples. Apples were never my favorite fruit, but I’ve realized that they were a staple in my daily life. At the College of William and Mary, every time I exited the dining hall, I would grab a couple apples and bananas to eat later in the day or the next morning. At home, my mom always buys apples, because they are one of the few fruits that my brother eats. Every fall, my family goes apple picking, and we gorge on apples and applesauce and apple crisp in the days following. In the United States, apples are abundant and cheap, included in every school lunch and healthy diet and, frankly, unappreciated. Sure, we credit apples with keeping the doctor away and all, but we still take them for granted. I took them for granted.

Japan’s apples are not the most expensive fruit — I could eat one each day without emptying my bank account. However, they are still expensive. When international students complain about Japanese food, we complain about the cost of fruit. In the United States, you could buy apples for a dollar a pound. Here, it’s almost a dollar an apple. The cost of grapes is even more absurd: $6 for a bunch. We only have grapes on special occasions. For example, on my roommate’s birthday we had a little picnic, and one friend brought grapes that she put on skewers like a kebab. Another friend even put grapes in a gift bag and gave them to my roommate as a birthday present.

We’ve been so shocked by the cost of fruit that this subject even came up during a discussion in my Law and Development in East Asia class. A Japanese student was explaining his support for the Trans-Pacific Partnership (TPP): liberalize the market, increase trade, increase the labor force, etc. The discussion was faltering until he mentioned the possibility of increasing agricultural exports —immediately another student interjects: “Sorry, but I don’t think many people would purchase Japanese fruit. Do you realize how expensive the apples are here?” Yes, I’m paraphrasing, but I swear she used apples as an example. Apparently, where she is from in China, you can buy 20 apples for the cost of one apple in Japan. Add export fees and refrigeration, and there is not much hope for that apple to be sold abroad.

We’ve been so shocked by the cost of fruit that this subject even came up during a discussion in my Law and Development in East Asia class.

Agriculture is highly protected by the Japanese government, making it a contentious point in the TPP negotiations. Farmers account for only about two percent of the labor in Japan, but — until reforms this year — they had a very strong lobbying force. The TPP is unlikely to help Japanese agricultural exports, and may even damage its farming industry. An American in my class was unsympathetic: the rural and farming areas are dying off anyways, as young people move to cities and everyone else grays. No matter how much Japan would like to be self-sufficient, it simply can’t produce enough for its own population.

Fortunately, Japan has other goods to offer the world. Japan is known for providing high-quality luxury items. This even includes luxury fruits — it’s a growing business. Giving fruit as a gift is not just for poor international students’ birthdays. Gift giving is a huge part of Japanese culture, and your boss might deserve some $30 grapes. Those grapes would be perfectly shaped and unblemished.