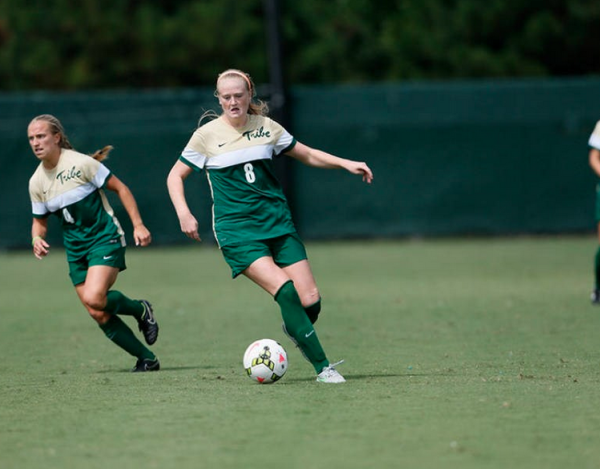 In two matches on the road against Colonial Athletic Association opponents Towson and James Madison, William and Mary attempted a combined 38 shots, while the Tigers and the Dukes took just 15. Constantly pressuring and attacking its competition’s goal, the Tribe looked poised for a deep playoff run, earning a 3-2 win and a 1-1 draw over the weekend to claim the No. 2 seed in the conference for next month’s playoff tournament.

The College (12-3-2, 6-1-1 CAA) took no time asserting its superiority over Towson (7-8-4, 1-6-2 CAA) Friday afternoon, scoring within the first four minutes. Freshman midfielder Mackenzie Kober tallied for the second game running, receiving a pass in the box from sophomore defender Haley Kent and maneuvering around a defender before slotting the ball home.

The Tribe scored two additional goals in the first half, taking 13 shots, but not before the Tigers equalized in the ninth minute. Towson forward McKenzie McCaull fired a shot toward goal that bounced oddly off the turf past senior goalkeeper Caroline Casey and ended up in the back of the net. Despite only allowing two shots over the first 45 minutes, the College conceded a goal, breaking the running streak of shutouts, which lasted four-and-a-half consecutive games.

Unfazed, the Tribe offense continued to attack the opposition’s back line and retook the lead through sophomore forward Sami Grasso just four minutes after McCaull’s goal. Senior midfielder Nicole Baxter fed Grasso the ball 13 yards out and Grasso went for an ambitious chip shot. Her decision paid off as she lofted the ball over the Tigers’ goalkeeper Taylor Sebolao and into the net, scoring for her fifth goal of the 2015 season.

William and Mary scored again right before the halftime whistle. Junior midfielder Haley Kavanaugh found sophomore midfielder Rachel Moore, who found the back of the net for her third goal of the season and the Tribe’s third of the match. The College went into the locker room with a 3-1 lead, a relatively even score line given the Tribe’s lopsided advantage in chances created. But Sebolao kept Towson in the game, coming up with four of her game-high six saves in the opening 45 minutes.

Sebolao’s first half heroics paid off in the 62nd minute as the Tigers pulled a goal back through forward Hollie Garber, whose drive from 15 yards out beat Casey for the fifth and final goal of the match. Both teams pressed for another goal but neither found one, as Sebolao and Casey kept the score line at 3-2 for the remainder of the match. The scoreboard and stat sheet told two drastically different tales, as the Tribe held a 20-6 advantage in shots but only won by a single goal. Nevertheless, the College claimed the all-important victory before traveling to Harrisonburg, Va. to face James Madison (11-6-2, 4-2-2 CAA).

The scoreboard and stat sheet told two drastically different tales, as the Tribe held a 20-6 advantage in shots but only won by a single goal.

Sunday’s statistics told reflected the same story of the Towson match, with the Tribe doubling up the Dukes in shots 18-9. However, after the regulation 90 minutes and two 10-minute overtime periods, the teams stayed knotted at 1-1.

The College created plenty of chances in the initial 45 minutes, but James Madison goalkeeper Ellen Forrest denied the Tribe four times. Moore and Grasso attempted five shots, but all five either sailed high or were blocked by a Duke defender.

Ultimately, it was the hosts who opened the scoring in the first half in the 40th minute against the run of play. James Madison defender Kylie Hegemier lifted a cross into the box, and Casey came off her line to claim the ball. Unfortunately for Casey, she was beaten to it by Dukes forward Alyssa Zurlo, who buried her shot in the back of the net to put the College behind 1-0 heading into halftime.

Forrest continued to frustrate the Tribe attack in the second half, recording four more saves in the period. However, she was powerless to stop senior forward Barbara Platenberg in the 68th minute. Platenberg beat the James Madison back line to Baxter’s long ball, took a few dribbles then slotted home to tie the score at 1-1.

The College appeared the more likely team to find the winner before the full time whistle, but Forrest and the Dukes repelled the Tribe’s relentless pressure to force extra time. The first overtime period saw only one shot, but it nearly ended the match. James Madison forward Ashley Herndon put a header on frame with eight seconds left on the clock, but the crossbar preserved the deadlock and sent the game into a second overtime.

Both teams created goal-scoring opportunities in the final 10-minute period, but the College could not put their shots on target and Casey saved the Dukes’ lone effort in the 104th minute. It was her 288th career save, giving her sole possession of second place in William and Mary history.

With the win and the draw the Tribe earned a first-round bye and No. 2 seed for the upcoming CAA playoffs. The team faces Elon on the road in its regular season finale this Tuesday, Oct. 27, with a win giving the College a share of the regular season conference title in a split with Hofstra. Kickoff is scheduled for 7 p.m.