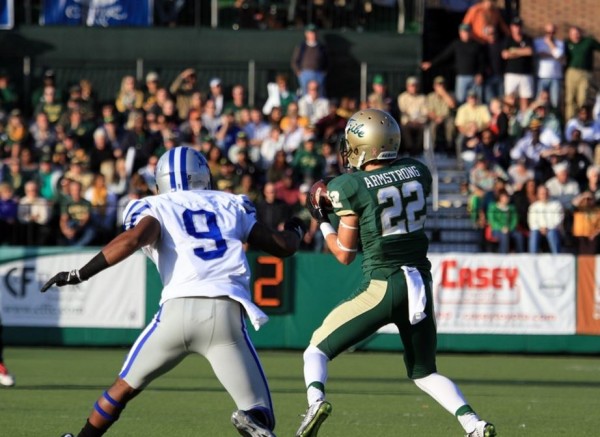 Just how much of No. 9 James Madison’s No. 1 Colonial Athletic Association offense was based on senior quarterback Vad Lee?  That’s the question William and Mary will have to answer, as the No. 16/15 Tribe takes on the Dukes in a premier CAA matchup this weekend at Zable Stadium.

In the aftermath of the upset 59-49 victory by No. 8 Richmond over then—No . 4 JMU, the race for the CAA regular season title could be mistaken for an episode of “Survivor,” as another quarterback went down with a serious injury. Lee has been declared out for the season after having foot surgery earlier this week, joining Villanova standout quarterback John Robertson on the sidelines. Conventional wisdom dictates that the team whose gunslinger stays upright till the season’s finale in late November will be headed for the Football Championship Subdivision playoffs, and the story could be just that simple for the Tribe and the Dukes.

In addition to the top passing offense in the CAA, James Madison boasts the best rushing attack in the conference by 710 yards over Delaware, and 980 more yards than the CAA’s third-most potent ground game, a distinction held by the College. Not 98 yards, 980 more than the Tribe. To put that in perspective, William and Mary would have to play 4.375 more games than the Dukes to catch up to that total based off the Tribe’s average rushing yards per game, or roughly 262 more minutes of gametime, provided the Duke collectively retired from football for that time period.

But the loss of Lee stings all aspects of the Duke’s offense. Lee broke defenses with his feet just as often as his arm, as the quarterback racked up 870 yards on the ground off 109 carries, the second-most carries on the team. James Madison’s running back Abdullah Khalid has registered 769 yards off 146 carries. With Lee out and Khalid presumably taking more of the carries, the Duke’s offense looks more traditional, and thus easier to stop, as head coach Jimmye Laycock  ’70 will not have to worry about such an effective dual-threat quarterback. Lee tied the school record for career passing touchdowns with 51, was the No. 3 passer in FCS football by yardage, and fourth in passing touchdowns with 21 this season.

Football may have 11 men on the field, but James Madison was largely a one-man show under Lee.

That’s not to say that the Dukes are abandoning the concept of a mobile quarterback entirely. Sophomore quarterback Bryan Schor rushed three times for 18 yards filling in for Lee in the Richmond loss. In the one quarter of action, Schoor finished 4 of 6 for 74 yards and a touchdown. His ability is the biggest question entering Saturday’s matchup.

History is against the College. The Tribe has collapsed in major conference matchups late in the season in the past two years. When the Tribe has had to win three of its last four games, they’ve only won two. In 2014, the No. 17 College lost to unranked James Madison in week nine before falling to Richmond in the final game. The year prior, the last two defeats came in consecutive losses to end the season, against No. 7 Towson and unranked Richmond. Each of those years, William and Mary finds itself out in the cold come December playoffs, riding a 7-5 record that’s always one game short of qualifying for the postseason.

However, Saturday looks to be a different story. Senior linebacker Zach Fetters has filled in excellently at middle linebacker for the injured senior linebacker Luke Rhodes. If Rhodes is still unable to play, the Tribe run defense will be fine, though his return would bolster the unit, currently No. 1 in CAA total defense and No. 1 in CAA scoring defense, allowing just 15.3 points a game.

With a 59-point thrashing, James Madison’s defense is nothing but question marks, down at No.  8 in the conference in total defense, surrendering an average of 392 yards per game on top of a 25.8 point average allowed. Without Lee and against the Tribe’s capable offense, those numbers are unsustainable if the Dukes hope to leave Williamsburg with a win. Richmond piled up over 300 yards on the ground on the Dukes. Expect Laycock to try to repeat the act, with a heavy reliance upon junior running back Kendell Anderson and senior tailback Mikal Abdul-Saboor.

Sophomore wide receiver DeVonte Dedmon’s status is still uncertain after a rib injury last week, but if he is able to play, expect a breakaway reception or two off play-action as James Madison will have to bring a safety down into the box to slow the rushing attack.  James Madison needs a scoring game to beat the Tribe, and if Schoor can manage the offense effectively, the College has to have a big play threat to stay competitive — Dedmon is that threat. As the Hampton game last week showed, the Tribe can’t be expected to sustain long drives and get touchdowns, even with good field position. But if James Madison continuously has to drop eight guys into the box to stop Anderson, my bet is that Dedmon can escape the other three for some game-breaking plays off the play-action fake.

As far as intangibles, it will be crucial to see if the Dukes are disheartened after the devastating conference loss last week- losing with the hype of ESPN’s College GameDay would’ve been bad enough, but Lee going down is downright crippling. The Tribe has no such questions entering the game and certainly will be gunning for the upset. I don’t expect junior quarterback Steve Cluley to throw more than five passes in the fourth quarter because he shouldn’t have to with a gassed Dukes defense and two excellent running backs grinding down the clock behind a strong offensive line. I think the Dukes will stay motivated, and put up a great game, as Schoor will show himself to be a capable quarterback. However, factors such as home field advantage and playing a rush defense as solid as a sponge make a difference, and the Tribe will get over its late season woes — for this week at least — in a thrilling 34-24 game.