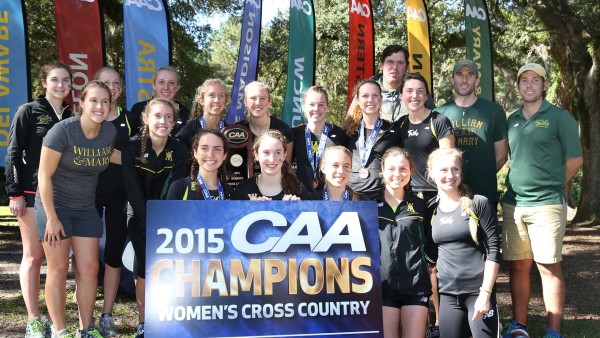 Saturday morning, William and Mary competed at the Colonial Athletic Association Championships, where both the men’s and women’s squads continued their respective streaks of dominating the competition.

Held at Laurel Hill Plantation in Mt. Pleasant, S.C., the start time of the women’s 6,000-meter race preceded that of the men’s race. As it has all season, the nationally-ranked No. 24 Tribe blew away the other runners to earn the conference title for the fourth-straight year and the NCAA top 3 record 21st overall title for the program. Four of the race’s top five finishers were members of the College, led by senior Emily Stites in first overall. Stites, a six-time All-American, won the championship 10 seconds ahead of the rest of the field with a meet record-breaking time of 20:00.2. The former record was broken by 4 seconds from Ali Henderson ’04’s 2003 finish of 20:14. The win is Stites’ first conference individual title of her career.

Stites, a six-time All-American, won the championship 10 seconds ahead of the rest of the field with a meet record-breaking time of 20:00.2.

After 10 seconds of no additional finishers, sophomore Regan Rome crossed the line at 20:10.6. Another gap in competition showed how dominant Stites and Rome are in the CAA, as over 30 seconds elapsed before the next runner crossed. At 20:48.9, senior Meghan McGovern finished the podium sweep in third. After James Madison’s Carol Strock took fourth to interrupt a top 4 sweep, sophomore Molly Breidenbaugh finished at 20:56 as the fourth Tribe point-scorer. Redshirt sophomore Molly Applegate finished in 12th as the final member of the 2015 All-CAA team with a time of 21:24.9. 2014 CAA individual champion redshirt senior Carolyn Hennessey finished right behind Applegate at 21:35.2 in 13th, just missing All-CAA honors. The final member of the College’s top 7 was senior Leanna Eisenman, who rounded out the top 20 finishers at 21:57.3 in 20th place.

The women’s squad finished with 23 points and all seven point scorers in the top 20 in the field of 89 participants. Runner-up JMU scored 54 points, while third-place Elon had 66 points. The Tribe’s spread of finishers was 1:24.8, one of the larger gaps among the teams, but the average time was 40 seconds less than the rest of the racers.

The men’s championship 8,000-meter race that took place later that morning had some similarities with that of the women’s team, namely winning the team title and having four of the top 5 finishing times.

However, the main difference is that William and Mary did not take the individual title, which went to Elon rookie Nick Ciolkowski, who finished 1.3 seconds ahead of Tribe runner-up junior Faris Sakallah’s 24.23. In the 2014 championship Elon also had the first place finish while the Tribe held the title win.

2014 conference runner-up senior Ryan Gousse took third at 24:33.6 and was followed by junior Trevor Sleight and senior David Barney to round out the top 5. Sleight finished fourth in 24:41.7 while Barney took fifth in 24:44.7, four seconds ahead of the sixth-place finisher. The rest of the top 7 Tribe finishers were all in the top 12 to make the All-CAA team as freshman Evan Woods took seventh at 25:00.7, sophomore Ryan Thompson took ninth at 25:07.6 and sophomore Dawson Connell took 11th at 25:12.7.

The win marks the 16th consecutive CAA Men’s Championship title, a streak that has been ongoing since 2000. The streak is now in the NCAA top 5 of all-time winning streaks for men’s cross country.

The squad finished in first place with 21 points, 46 points ahead of second-place Northeastern and 60 points ahead of third-place Elon. The spread of the top 7 was the lowest of the conference with only 37.7 seconds between Sakallah and Connell. The average time for William and Mary was 24:41, 48 seconds faster than that of the rest of the six teams. The win marks the 16th consecutive CAA Men’s Championship title, a streak that has been ongoing since 2000. The streak is now in the NCAA top 5 of all-time winning streaks for men’s cross country.

Next week, William and Mary participates in the Massey Cancer Center 5k in Williamsburg, Va., before heading to the NCAA Southeast Regional Championships Nov. 13, held in Charlottesville, Va. Last year, the women’s team won the regional for the first time in the program’s history, in an upset over four teams ranked higher in national polls, while the men took 12th to upset three teams ranked higher than them.