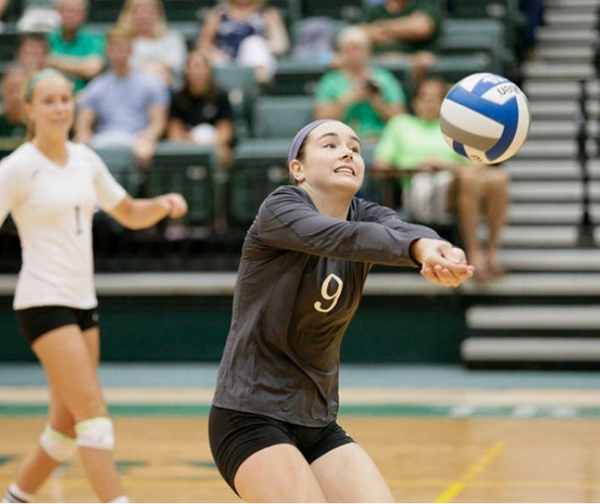 Down 19-18 in the third set with the match against Delaware tied 1-1, William and Mary knew the team needed to finish strong to turn the tide.  Head coach Melissa Shelton called a timeout, allowing the Tribe to regroup.  From there, the College surged to win the set, and with the ensuing momentum,  secured a rare road win on Sunday by taking the fourth set as well, beating the Blue Hens 3-1 in Newark, Del.

The game ended up being somewhat of an upset as the Tribe improved to 9-16 overall (3-9 CAA) while the Blue Hens fell to 12-13 (4-8 CAA). Delaware stands at No. 6 in the Colonial Athletic Association, with a tentative hold on a final conference playoff berth, while the Tribe ranks No. 7.

William and Mary employed a balanced attack to beat Delaware.  Four players had 10 or more kills to lead the team.  Freshman Heather Pippus finished with 13 kills, as well as 11 digs and four blocks.  Senior Dessi Koleva had a strong outing with 13 kills, 18 digs and a pair of blocks.  Redshirt junior Michelle Heath and sophomore Sydney Biniak each had 13 kills and a block, while Biniak also added eight digs.

Down by a point, the Tribe called for a timeout. They fought back to tie it once at 19-19 and then again at 20-20.  Sophomore Sara Zumbach delivered a huge ace for the Tribe, giving them a lead they would not relinquish in the 25-21 win.  Pippus dominated the closing moments of the set, finishing the Blue Hens with the last three kills.

The fourth and final set was tight from start to finish.  William and Mary led 24-22 and appeared to be on the verge of closing out Delaware, but the Blue Hens fought back to tie it 24-24.  Biniak rallied her team and sent home two straight kills to finish the fourth set 26-24.

The win was encouraging for the young team, who will look to build on their success to finish the regular season on an upward swing. The Tribe has had just two victories in their last 10 games; Sunday’s win snapped a 4-game losing streak.

William and Mary volleyball continues its road trip with a visit to the University of North Carolina at Wilmington at 7 pm on Nov. 6.  From there, the Tribe will travel to play the next day against the College of Charleston, also at 7 pm.