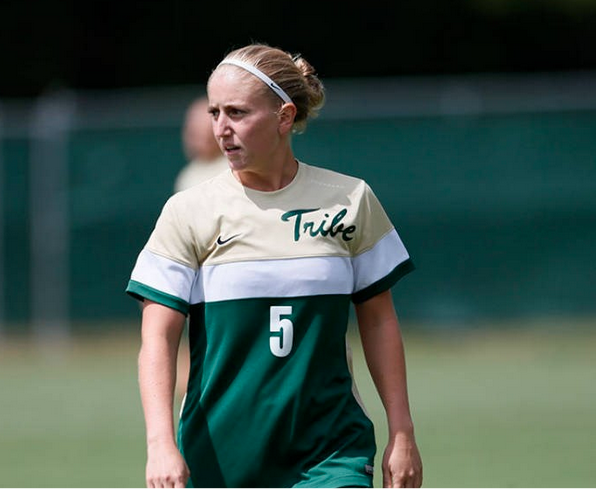 Once again capitalizing on the majority of its scoring chances, William and Mary closed out its 2015 regular season schedule with a 2-0 shutout of conference opponent Elon Tuesday night, clinching a share of the Colonial Athletic Association regular season title in the process. It was the Tribe’s eighth straight match without a loss — a stretch dating back to the end of September — and the seventh of those eight that resulted in a win.

The game between the College (13-3-2, 7-1-1 CAA) and the Phoenix (9-8-2, 1-7-1 CAA), originally scheduled for the beginning of October, was pushed back to the end of the season due to flooding and the threat posed by Hurricane Joaquin. However, the schedule change did not deter the rain one bit, as the match was played under a constant downpour.

Elon never posed a real threat to senior goalkeeper Caroline Casey’s net over the full 90 minutes. The Phoenix front line forced zero corner kicks and placed only two of its four shots on target, both of which were low drives lacking any venom or velocity and were effortlessly picked off the turf by the Tribe shot stopper. It was Casey’s ninth shutout of the 2015 campaign and the 27th of her career, putting her in a tie with Karen Wake ‘06 for third all-time in school history in that category.

The match did not feature a shot until the 37th minute, a strike by junior forward Kady Kriner that forced a save out of Phoenix goalkeeper Taylor Mohr. It was one of only three shots created in the initial 45 minutes, all attempted by the College.

The pace of play picked up in the second half, both squads looking to break the deadlock. Surprisingly it was Elon who had the first crack at goal in the half, as defender Kendall Ballotti sent a shot rolling toward Casey in the 47th minute, which the senior goalie handled with ease.

As has become the norm over the course of the season, William and Mary produced plenty of goal-scoring opportunities — 13 in total Tuesday — while limiting its opposition’s attacks. However, the offense once again struggled to find the back of the net. A stretch in the second period epitomized this issue. From the 52nd to the 63rd minute the Tribe attempted five shots, more than the Phoenix had the entire game, but had nothing to show for their efforts. The closest the College came to scoring was sophomore forward Sami Grasso’s drive in the 63rd minute, but Mohr dove, stopped the shot and kept the Tribe scoreless.

It was Elon’s resilient defense all night that gifted the College with a penalty kick in the 76th minute. Grasso made a run along the edge of the box and was fouled by a Phoenix defender. Senior midfielder Nicole Baxter, the Tribe’s designated spot-kick taker, stepped up and buried her shot in the low left corner of the net.

The College put the nail in the coffin in the 89th minute. Sophomore midfielder Rachel Moore made a run down the left side, beating her defender with a burst of pace and calmly slotting her shot past Mohr to double the Tribe lead with less than two minutes to play, her fourth goal of the season. Elon failed to conjure a last minute miracle, and the College celebrated the 2-0 win and its share of the regular season title.

William and Mary enters the CAA playoffs in Hempstead, N.Y., next week as the No. 2 seed, and will face the winner of the first round match between UNC-Wilmington and Delaware on Nov. 6. There is currently no scheduled kickoff time.