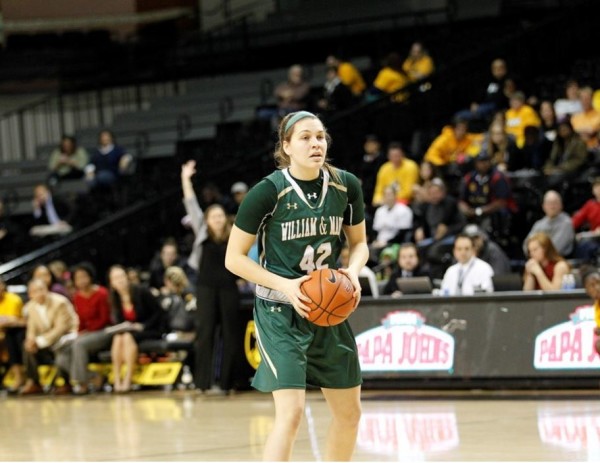 Seasons aren’t won and lost in December, a fact that is certainly not wasted on head coach Ed Swanson. But one could almost perceive a smile on his face prior to the start of the press conference on Dec.3.

So said head coach Ed Swanson after William and Mary (6-1) cruised to a 75-55 victory over the Wofford Terriers in the Tribe’s third home contest of the 2015 season at Kaplan Arena Dec. 3. Win No. 6 was hardly in doubt for the College, as the team led Wofford by as much as 24 points in the third quarter. However, the Terriers hung with the Tribe in the opening 10 minutes, as each team swapped leads en route to a 19-19 tie for the first quarter.

“It’s been a tough week, played at Delaware State on Monday, quick turnaround on a long bus trip back Monday night, and right back at it less than 48 hours later,” Swanson said. “We were a little slow, we got in rhythm and got our defense going. I thought Wofford … did a really good job off the offensive glass, but once we stabilized that, I thought we got in a better rhythm offensively.”

I thought Wofford … did a really good job off the offensive glass, but once we stabilized that, I thought we got in a better rhythm offensively.

The Terriers tied the Tribe in second-chance points in the opening quarter with four points. Wofford continued to have decent success on offensive rebounding, finishing the game with seven total. However, the Terriers struggled to prevent the College from having the same success, as William and Mary finished the game with eight offensive rebounds. Junior guard Alexandra Masaquel played a huge role in the Tribe’s rebounding success, finishing the game with a double-double at 10 rebounds and 18 points.

“I just went out there knowing that last game we didn’t perform at the best of our abilities,” Masaquel said. “I had the mindset … to get the team together, be a leader on the court to discover this edge that coach has been talking about.”

Swanson added his own comments on Masaquel’s performance.

In the second quarter, the Tribe trailed the Terriers 21-19 before Masaquel began to wreak havoc on the Wofford defense, adding eight of the Tribe’s next 12 points as well as an assist as the College stormed out ahead on a 12-0 run. With 8:37 left to play in the first half, Wofford watched its last lead cut down by the Tribe in the eventual loss.

The Terriers’ opening momentum clearly wasn’t sustainable on second glance, as the Tribe committed six fouls in the opening quarter compared to the Terrier’s two.

“We want to be an aggressive team, but we also have to be disciplined, especially with the new rule about five fouls in a quarter and then go right to two shots,” Swanson said. “But I’d rather have it that that way where we’re aggressive.”

The Tribe’s defense began to solidify against the Wofford attack, and eventually the turnovers began to rack up in the College’s favor. The Tribe finished with a 27-11 advantage in points off turnovers, a decisive factor in the game.

“We haven’t scratched the surface of how talented this team is,” Swanson said. We’re back at it again early tomorrow morning on a bus ride to Clemson.”

Visiting an opponent in the storied Atlantic Coast Conference, William and Mary was unfazed as the defense suffocated the Clemson Tigers in a 58-41 road upset down in South Carolina on Saturday, Dec. 5.

En route to the program’s best start in its Division I history with a 7-1 record, William and Mary limited the Tigers to just six points in the entire second half of action, securing the College’s first victory over an ACC opponent since a 64-41 victory over Virginia Tech on Nov. 28, 2006.

“The first half, I thought the bench gave us a great lift,” Swanson told Tribe Athletics. “We were down 12 points; Clemson really came out and ran right past us… I challenged the kids during one timeout and we really responded, especially the bench.”

The bench contributed over half of the Tribe’s points, racking up 30 compared to the Tigers’ meager 12 points off the bench. As the opening quarter indicated, the College needed every one of those bench points.

We were down 12 points; Clemson really came out and ran right past us… I challenged the kids during one timeout and we really responded, especially the bench.

Neither offense truly got into gear until about four minutes of clock had expired. The Tribe’s narrow 7-6 advantage collapsed under a 17-4 run for the Tigers late in the opening quarter. Freshman forward Ali Englehardt added five points to cut into the lead before the end of the quarter as the team’s traded possessions, leaving the Tribe down 28-18 by the end of the first.

The second quarter break provided new-life for the Tribe, as the College answered with a 15-4 run of their own to briefly capture the lead at 33-32. Sophomore center Abby Rendle and junior guard Marlena Tremba both jump-started the Tribe’s offense; Tremba earning her first career double-double with 14 points and 10 assists, while Rendle nearly earned a double-double herself with 13 points and eight rebounds.

Clemson hung with the Tribe, though Englehardt continued to shine off the bench to stay a step ahead of the Tigers, adding a jumper and a three before the end of the first half. Englehardt finished with 10 points, six from beyond the arc.

At halftime, the Tribe held a narrow 40-35 advantage.

Though a five-point lead can hardly be called anything but a thin margin, it was nearly enough to put the Tigers away. For the next twenty minutes of action, Clemson registered a meager six points.

“Second half our defense was stellar right from the opening possession, very little letdown,” Swanson said to Tribe Athletics. “Perhaps the best man-to-man defense we’ve played in a really long time and I was very encouraged by that.”

Tremba added eight of the 10 points in the Tribe’s opening 10-0 run to distance themselves from the Tigers. Each team made a free throw before the Tigers cashed in a shot from beyond the three-point arc, while the College added another free throw to end the third quarter 52-39.

Perhaps the best man-to-man defense we’ve played in a really long time and I was very encouraged by that.

Clemson never came close to overcoming the 13-point deficit after blowing a 16-point lead in the first half. The Tribe cruised through the final quarter in the 58-41 victory, as the Tiger’s excellent defense was left out to dry by the impotent offense. The 16-point deficit marks the largest overcome by the College in 2015.

The Tribe has a 12-day wait for the season to resume due to exams, but will return to action in Kaplan Arena Dec. 17 for a game against Norfolk State, entering the contest with the first five-game winning streak since the 2008-09 season.