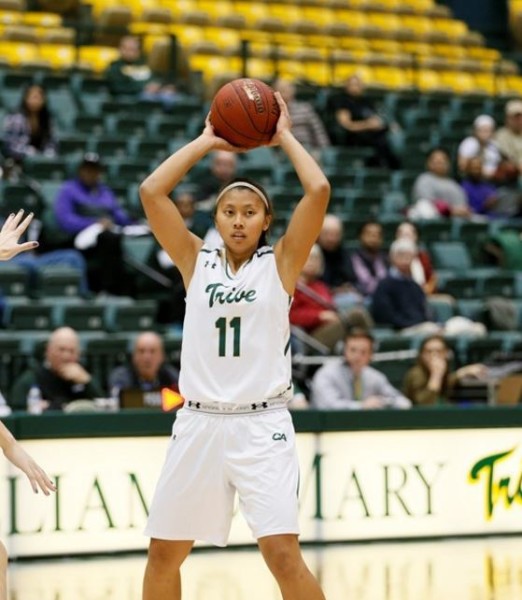 Opening a brutal stretch of three games in five days Dec. 1, William and Mary started its week on the right foot, taking out Delaware State on the road 65-59 to improve its record to 5-1.

The Tribe took a 10-point lead into the halftime break over the Hornets (1-6), largely thanks to the sharpshooting of junior guard Marlena Tremba. Tremba poured in 16 of the College’s 32 first-half points on her way to a 21-point night, her third game of the season with 20 or more points.

While pleased with his shooting guard’s performance, head coach Ed Swanson understood the need to find other scoring options as the season goes along.

“In order for us to be good we’ve got to have a more balanced attack,” Swanson told Tribe Athletics. “Teams are going to be able to focus on Marlena, and we’re going to need other players to step up.”

The only other Tribe player to finish in double figures was junior forward Alexandra Masaquel, who chipped in 10 points along with 12 rebounds, her first double-double of the season.

“They handled us pretty well on the boards in the first quarter,” Swanson told Tribe Athletics. “But I think because of Alex’s play we really turned the tides on them the rest of the game, and we were able to win the battle of the boards.”

I think because of Alex’s play we really turned the tides on them the rest of the game, and we were able to win the battle of the boards.

Facing a generally smaller team in Delaware State, the Tribe not only held an advantage in rebounds but also dominated the Hornets inside on the offensive end, racking up 41 points in the paint. Other than Tremba, who went 4 of 10 from three-point range, the Tribe struggled from beyond the arc, but a size advantage down low helped maintain and even extend the College’s lead in the second half, which rose to as much as 19 points in the fourth quarter.

The defense played its part in keeping the Tribe advantage intact, forcing 24 Delaware State turnovers and recording 16 steals, holding the Hornets to a sub-38 shooting percentage.

However, similar to what happened at Loyola the previous week, the College let its double-digit lead slip away in the second half. William and Mary turned the ball over 10 times in the final two quarters, resulting in 12 Delaware State points, 10 of which came in the fourth quarter as the Hornets chipped away at the lead. After the game, Swanson acknowledged his squad’s failure to keep up the strong play late in a road contest once again.

Despite Delaware State’s late push, outscoring the Tribe 24-14 in the fourth quarter, the College’s sizable lead proved too much to overcome and William and Mary escaped with a 65-59 win.