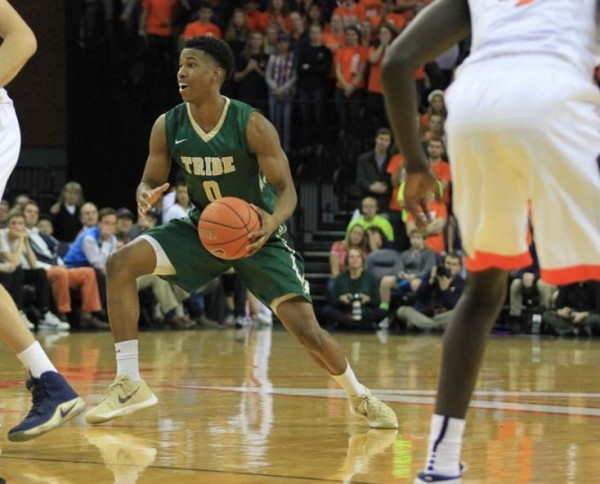 William and Mary basketball had mixed results Monday night with both men’s and women’s teams in action. While the men pulled out an impressive 78-75 overtime win against another strong mid-major in High Point to maintain a spotless home record for the College, the women had a tough night on the road against Virginia Commonwealth, falling to the Rams 73-47.

Following a dominating 94-64 victory over Mary Washington three days prior, the Tribe men’s squad(7-3) faced a challenging test in the Panthers (8-4, 2-0 Big South), winners of the Big South regular season title three years running. The story of the night was the late game performance of junior guard Daniel Dixon, who scored nine of his team-high 20 points in the overtime period, including the game-winning three pointer with 3.4 seconds to go.

He’s a money man, we wanted the ball in his…hands at the end of the ballgame

“He’s a money man,” head coach Tony Shaver told Tribe Athletics. “He likes the ball in his hands, we wanted the ball in his…hands at the end of the ballgame. I’ll be honest with you it wasn’t exactly how we drew it up, but we had the ball in the right person’s hands that’s for sure, and he made a big-time play.”

Dixon and the rest of the William and Mary squad opened the game quite cold, shooting less than 36 percent from the floor in the first half as High Point opened up an 11 point lead with 3:31 left in the opening period. However the Tribe came to life in those final minutes of the half, riding an 8-0 run into the halftime break to cut the lead to 32-29.

The hot shooting continued in the second half, with the College burying over 48 percent of their field goal attempts in the period. The team was spurred on by strong bench play, with the reserves accumulating 14 of the Tribe’s 38 points in the period. After the game, Dixon complimented the non-starters on their ability to perform in a tight contest.

William and Mary led by as much as 8 in the second half, but the Panthers went on an 8-0 run of their own to knot the game up, and the two teams headed into overtime tied at 67. Dixon took the game over from there, racking up nine of the team’s 11 points in the five minute period. With 5 seconds to go, the sharpshooter stopped and popped from well beyond the three point arc, burying the crucial jumper and clinching a hard-fought 78-75 victory. The Tribe is now 5-0 at Kaplan Arena this season.

While the men’s team can celebrate a victory heading into the holidays, the women (8-2) struggled all night against VCU (10-2) and their trademark intense pressure. Zero Tribe players scored in double figures, as the team shot an abysmal 30.2% from the field, committing 18 turnovers that resulted in 17 points for the Rams.

In combination with the bevy of missed shots and errant passes, the College only dished out 10 assists, their lowest assist total all season, certainly a contributing factor to their lowest scoring output of the 2015-16 campaign.

“When we have low assist totals, our points reflect it,” Swanson told Tribe Athletics. “We don’t have a lot of one on one, break you down type players, and we’ve got to trust each other and trust the offense, work the ball and play inside out.”

The Tribe also had one of their worst nights of the season on defense, allowing 73 points on 41.9% shooting, including a scalding 50% in the second half. VCU dominated inside, outscoring the Tribe 34-18 in the paint while grabbing 20 offensive rebounds, winning the battle of the boards 48-33. The Rams held a double-digit lead for almost the entire second half, and ultimately defeated the College 73-47.

Both teams return to the court next Tuesday, December 29 in a doubleheader at Kaplan Arena. The women’s team takes on Old Dominion at 5 p.m. while the men face off against Central Michigan at 7:30 p.m. They will be the final games in non-conference play for both teams.