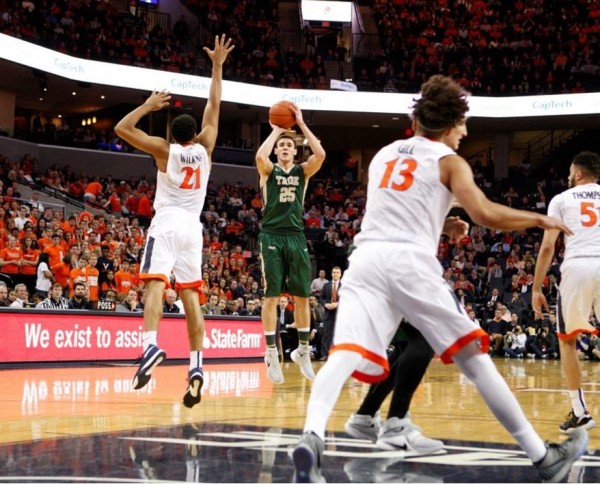 Coming into the matchup with then No. 10 Virginia in Charlottesville, few expected William and Mary, which had defeated another Atlantic Coast Conference school in N.C. State in the season opener, to pull off the in-state upset. These expectations were met as the Cavaliers and their vicious defense hounded the Tribe all afternoon, forcing 19 turnovers and triumphing 67-52.

“Without studying [the stat sheet], there’s one stat I know is going to be glaring, and that’s our turnovers,” head coach Tony Shaver told Tribe Athletics after the loss. “Turnovers was the difference in the ballgame. I understand a team of that quality makes you do some things that aren’t characteristic, but our decision-making as a ball club was very poor today.”

From the opening possession the College (7-3) was sloppy. Senior forward Terry Tarpey turned the ball over on the Tribe’s first chance on offense leading to a three pointer on the other end from Virginia guard Malcolm Brogdon, who co-led all scorers with 16 points. Brogdon’s outstanding performance could only be matched by a teammate in the Cavalier’s power forward Anthony Gill.

Without studying [the stat sheet], there’s one stat I know is going to be glaring, and that’s our turnovers

The turnover margin impacted the scoreline early, as the Cavaliers (10-1) built a 10-point lead by the end of the first half while holding a 12-2 advantage in points off turnovers. The Tribe (7-3) gave the ball away eight times in the opening 20 minutes, and lacked their usual balance on offense. Only four William and Mary players scored in the half, getting zero points from the bench.

Meanwhile Virginia had seven players in the scoring column, their non-starters contributing 11 of their 32 points. Offensive rebounds also hurt the Tribe, as they gave up eight second chance points in the first half. After the game Shaver praised the effort on defense, but continued to lament the amount of College turnovers.

“Honestly I thought our five on five defense was really good tonight,” Shaver told Tribe Athletics. “But you can’t give up 19 turnovers and what we call ‘pick sixes.’ Almost every one of those turnovers was a dunk on the other end, and it just takes our chance to win away.”

To their credit, the Tribe found the net better in the second half, putting up 30 points while shooting 40 percent from three point range and getting the bench more involved. However, turnovers continued to haunt them. The College gave the ball away 11 times in the second half, 10 of which were credited to a starter, resulting in eight Cavalier points. Tarpey had an uncharacteristically bad afternoon, scoring only four points along with five turnovers. Junior guard Daniel Dixon led the Tribe with 15 points, nine coming in the second half.

On the other end of the floor, Virginia put on a shooting clinic in the final 20 minutes, scoring 35 points and knocking down 50 percent of their field goals while only turning the ball over four times. The Cavaliers dominated down low, outscoring the College 34-24 in the paint on the game, as Gill collected 11 of his 16 points in the second half. Fast break points also doomed the Tribe, as the turnovers led to transition baskets for Virginia, who held a 12-0 advantage in that category. William and Mary cut it to within six in the second half, but never encroached further upon the lead, and the Cavaliers avoided the upset with a 67-52 win.

“We thought we had to do three things really well today to win this ballgame,” Shaver told Tribe Athletics. “One is we had to compete at a high level, and I think we competed. Two is we had to be a resilient club, and I think we were resilient… and three we had to win the battle of taking care of the little things, the execution side, and we certainly did not win that battle.”