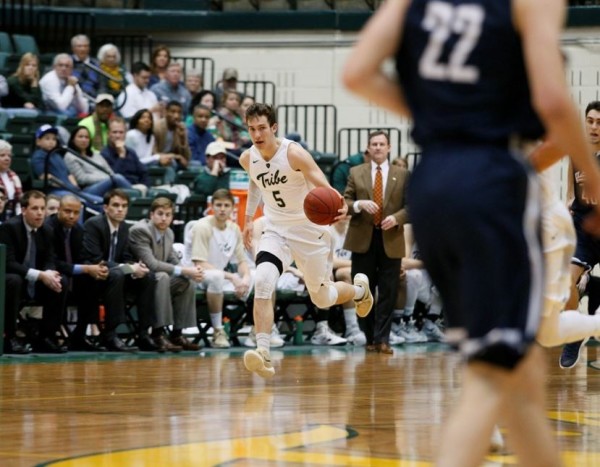 It goes without saying that exam week is among the most stressful times in student’s career at the College of William and Mary. The same pressure applies to athletes. Yet both the William and Mary women and men’s basketball teams managed to remember the X’s and O’s of their game plans as the Tribe notched home victories in Kaplan Arena on Dec. 17 and 18. The women’s team buried Norfolk State 67-47 Dec. 17. before the men surged in the second half to knock off Mary Washington in a 94-64 shootout Dec 18.

Led by junior forward Alexandra Masaquel, the Tribe (8-1) knocked off the winless Spartans (0-8) thanks to major advantages in turnovers; the College committed just 12 to the Spartans’ 25. On paper, the game looked to be a total mismatch. William and Mary rode into the game with a huge victory over Clemson from Dec. 5 as part of a five-game winning streak, complementing a home court advantage as well. Norfolk State hadn’t won a game in the 2015-2016 season yet, and while its four-point loss to Colonial Athletic Association member North Carolina-Wilmington (2-3 at the time) appears respectable, a Nov. 27 blowout loss to Mississippi State by a 92-34 says otherwise.

Yet the game did not start in the Tribe’s favor.

“I thought we got off to a low energy start,” head coach Ed Swanson told Tribe Athletics. “We got off to a slow start offensively, but defensively we were really moving well together.”

We’ve gotten better at finding the open player, and while we’ve overpassed a couple times, it’s better to overpass than to underpass

The Spartans notched the first four points of the game, but gradually gave way to the Tribe’s onslaught. The College stitched together a 13-2 run to end the first quarter and begin the second, as the Tribe first found success in dishing the ball out to perimeter shooters such as freshman guard Bianca Boggs or junior guard Marlena Tremba for threes, and then later by threading passes into the center to freshman forward Abby Rendle and Masaquel for layups and second-chance points. Those assists totaled up to 24 for the contest.

“We’ve gotten better at finding the open player, and while we’ve overpassed a couple times, it’s better to overpass than to underpass,” Swanson said to Tribe Athletics.

This formula was the key to success during the first half, as the College entered the locker room with a 37-22 advantage. The Spartans narrowed the lead to just eight points several times, but never built enough momentum for the comeback bid. Freshman guard Misha Jones contributed two three-pointers in the first half, en route to her career-high seven-point performance.

The second half proceeded much as the first, as William and Mary notched the first 11 points of the third quarter. However, the Tribe did ease up on the pressure towards the end of the game, as Norfolk State’s 15 points in the fourth quarter marked the team’s highest-scoring quarter of the game. Still, it was short of the points needed to overcome the Tribe in the College’s eventual 67-46 triumph.

Masaquel finished her night with eleven points and eleven rebounds, marking her third double-double in the past four games. However, Masaquel’s individual success in rebounding didn’t translate to the rest of the team, as the Spartans carried the rebound category by a 47-38 margin. The Tribe’s offense, spearheaded by Rendle with 16 points, proved more than sufficient to overcome the deficiency off the glass. Moving forward, it will be interesting to see if the team has difficulty in this aspect of the game, as rebounds is a statistic Swanson often characterizes as critical.

With the 8-1 start, the 2015-2016 Tribe has tied the program’s best start ever, a notable accomplishment made even sweeter by the flagship win over Clemson earlier in the season.

The men’s team seemed to initially struggle to get out of the final exam slump during its Dec. 18 matchup against Mary Washington (6-4). The Tribe (6-3) surrendered an early 16-9 advantage to the Eagles that slowly became a 33-40 first half deficit for the College. Playing without senior guard and team captain Terry Tarpey, William and Mary appeared poised for the upset against an Eagles team that was shooting hot from the arc. In the first 20 minutes of action, UMW shot a scalding 44.4 percent from the arc en route to 24 points.

“We’ve been terrific all year defending the three,” head coach Tony Shaver told Tribe Athletics in a postgame interview. “Mary Washington shoots threes, and we gave them too much space on the perimeter. For 20 minutes we weren’t good at defending the three, but second half was sensational.”

Junior guard Omar Prewitt kept the Tribe competitive in the first half of action, leading the team with 14 points in 17 minutes of play. However, Tarpey’s absence was especially felt in the turnover margin and rebound stats, as Tarpey led the team in both categories. Without its captain, the College managed just two steals in the first half, and trailed the rebound battle 21-19.

Though the script seemed set for a fall, the College came to life in an explosive second half.

As to what changed in the locker room between a dismal first half and an offensive fireworks display of a second half, Shaver had the answer.

“Second half, we did a better job of building the defense out, closing out a little more aggressively, and contesting the threes, and we got missed shots” Shaver told Tribe Athletics. “Out of that, we got transition baskets, and we can run with the basketball. That was the key.”

That defensive key unlocked a 38-6 run for the Tribe coming out of the locker room, stunning the Eagles, who never seemed to recover their offensive firepower. Sophomore guard Greg Malinowski, starting for Tarpey, registered his first-career double-double at 15 points and 11 rebounds while cashing in a pair of three-pointers to begin the long route. Prewitt and junior guard Daniel Dixon led the charge with 21 and 17 points, respectively.

The surge of scoring for the College came in sets; first a 15-0 run to a 48-42 lead for the Tribe, then a 7-0 streak to push the lead to 57-46, and then finally the coup-de-grace of a 16-0 run to close the game out starting at 73-48. William and Mary’s bench aided the offensive rampage quite well, notably sophomore point guard Mike Scholtmann with five points, four assists, and three rebounds.

“We got great play out of Mike Scholtman” Shaver told Tribe Athletics. “That might’ve been my brightest spot of the day.”

The Eagles managed 16 points in their death throws after the high water-mark of a 31-point deficit with just over eight minutes left to play. The Tribe cruised to the finish line of a 94-64 victory, the highest score of the young season and the most points scored since a Jan. 28, 2015 win by a score of 100-79 over Hofstra. The Tribe is 16-0 since 2013 when scoring 84 points or more. The College ultimately scored 61 second-half points, almost scoring more in 20 minutes than the UMW did during the entire game.

Perhaps nothing characterizes the game as well as Shaver’s summary of the game:

“Mary Washington was terrific for a half, and we were pretty good  for the second half,” Shaver told Tribe Athletics.