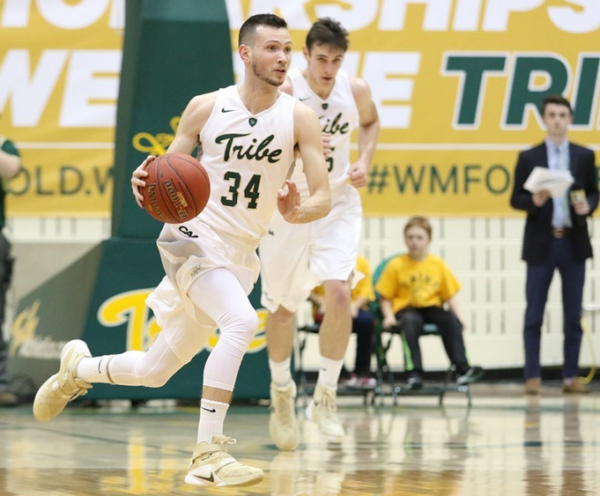 Entering their game against Colonial Athletic Association basement-dweller Delaware Thursday, William and Mary could have easily overlooked the Blue Hens and given up the costly upset loss, focusing instead on their marquee matchup against James Madison Sunday night. However, the Tribe stayed composed on the road, riding a school record-tying 16 threes to triumph 94-79, their first victory over Delaware since 2010, snapping a 0-9 streak against the Blue Hens.

“A really nice road win,” head coach Tony Shaver told Tribe Athletics. “Hadn’t won in this building in a long time, in fact we hadn’t won against Delaware in a long time … I think we answered ourselves in the disappointing performance against Hofstra a couple nights ago, and played much more inspired basketball tonight.”

The Blue Hens (5-16, 0-10 CAA) kept the College (15-6, 7-3) on their heels in the first half, outshooting the Tribe from the field by almost five percent. In fact, Delaware could easily have held a significant lead going into halftime if not for the sharpshooting of sophomore guard Connor Burchfield. The College reserve knocked down all six of his three-point attempts in the opening 20 minutes, leading all scorers with 18 points going into the halftime break and giving the Tribe a 42-38 lead.

“Connor Burchfield was incredible in the first half,” Shaver told Tribe Athletics. “And even though he didn’t get shots in the second half, he opened the game up for the rest of our team. They basically played a box and one on him in the second half, and were guarding him everywhere he went man to man.”

With the Blue Hen defense intent on containing Burchfield in the second half, his teammates began to get into a rhythm offensively. The College opened the half on an 8-0 run, zipping the ball around the court and tearing the Delaware zone to ribbons. Over the final 20 minutes the Tribe shot 53.6 percent for the field and collected 28 assists for the game, second most in team history. After the win, Shaver highlighted the team’s solid play in the second half and the leadership of his senior captains.

“We haven’t always been as good in the second half as we’d like,” Shaver told Tribe Athletics. “First thing I said when we walked into the locker room, [senior forwards] ‘Terry Tarpey and Sean Sheldon, this is on you right here. It’s your job to get this team ready and make us perform well for 40 minutes.’ And Terry and Sean were really good. Terry was so active tonight, his energy was so high, and he forces other people to play that way.”

“First thing I said when we walked into the locker room, [senior forwards] ‘Terry Tarpey and Sean Sheldon, this is on you right here. It’s your job to get this team ready and make us perform well for 40 minutes.’ And Terry and Sean were really good. Terry was so active tonight, his energy was so high, and he forces other people to play that way.”

With the offense firing on all cylinders in the second half, a somewhat lackluster defensive performance for William and Mary went largely under the radar. Coming into the game, the Tribe allowed an average of 70 points per game, and permitted opponents to shoot a 41.1 field goal percentage.

After giving up 91 points to a talented Hofstra team the previous weekend, the College allowed the Blue Hens, the lone team in the CAA without a conference win, to score 79 points while shooting almost 44 percent from the field and 48.3 percent from three-point range. Two Delaware players finished with more than 20 points, with Blue Hen guard Kory Holden leading all scorers with 29.

“We were better tonight, but not great,” Shaver told Tribe Athletics in his evaluation of the defensive performance.

Delaware remained on the edge of striking distance for much of the second half, cutting the lead to single digits with 4:08 to go on a Holden jumper. However, the Tribe continued to convert on the offensive end, knocking down the majority of their free throws when the Blue Hens began to foul. Solid free throw shooting closed out an important 94-79 road victory for the Tribe before their return to Williamsburg, where state rival James Madison will await a key CAA matchup.