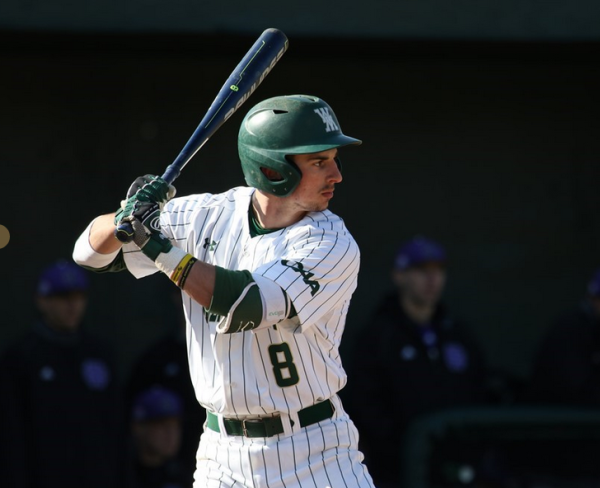 After winning its first series of the new season, William and Mary fell Tuesday at Liberty to open the 2016 midweek games. The Tribe (2-2) fell behind in the third inning, although the eventual game-winner did not come until a massive blow by way of a three-run home run in the bottom of the sixth. The Flames (2-2) finished the game with an 8-4 win Feb. 23.

Scoring opened in a very eventful third inning, the College taking a 3-0 lead before the Flames responded with four runs of their own in the subsequent half-inning. The Flames relieved their starter early, opting to call the bullpen at the start of the third. This proved to be the wrong move, as the hitless Tribe immediately got a single for the first offensive action of the game. Redshirt freshman shortstop Kyle Wrighte singled up the middle to get to first, advancing to third through a wild pitch and a sacrifice bunt. Sophomore left fielder Ryan Hall added a run batted in to the early season through a double that plated Wrighte. The Flames once again changed their man on the mound, sending in right-hander Shane Quarterley, who would eventually earn the win for the night. Quarterley allowed two runs as Hall made it home off an RBI single by senior centerfielder Josh Smith on the next at-bat, followed by Smith crossing the plate through an RBI single by freshman designated hitter Jason Waldman. The half-inning gave the College five hits and three runs, but three men were left on base, which would have given the Tribe a better chance in any potential late rallies.

The Flames put themselves on the scoreboard as freshman left-handed starting pitcher Bodie Sheehan gave up a double and a triple after an early flyout, plating one run. After the first run, an error by Wrighte allowed another Flames player to cross the plate, making it 3-2. The tying run came after the next batter hit a double, the go-ahead run coming off a similar play, both balls heading to left center. The latter double led to the inning’s second out as sophomore second baseman Cullen Large tagged the man out at the bag, the run scoring during the play. Sheehan escaped the inning giving up four runs and four hits.

The comeback attempt fell short in the following innings, as the Tribe stranded players on all bases in the fourth, scoring none while at bat, before Sheehan shut down the side in the bottom half. The fifth inning was uneventful for both dugouts, as was the top of the sixth, where the College had three straight flyouts.

In the bottom of the sixth, the Flames began with a single before a sacrifice bunt to put a runner in scoring position. A pinch hitter singled as well, putting men on first and third. A pop fly put two outs on the board as it looked like the Tribe may be able to escape without surrendering any runs. That hope slipped away as Flames infielder Andrew Kowalo smacked the ball out of the park off sophomore right-handed reliever Michael Toner to plate three, giving the home team an insurmountable 7-3 lead.

After an unproductive seventh, the Tribe and the Flames each scored once in the eighth, the College’s lone run coming from a sacrifice fly by Hall to send junior third baseman Tim Hoehn to home plate. The ninth inning rally didn’t come, as the Tribe had two flyouts and a popup after putting a man on second. The Flames took the game 8-4, both teams leaving 2-2 on the season.

Sheehan was credited with the loss, giving up three earned runs in four innings pitched, striking out three and walking one. The Tribe was outhit 12-8, while both squads had a single error. Large led the team’s hitting, going 2-5, while Hall added a team-high two RBIs.

The Tribe’s next game was scheduled for Feb. 27 against George Mason at Plumeri Park in Williamsburg, Va., but was postponed due to the tornado warning. As a result the home-opener was moved to this weekend against Holy Cross.