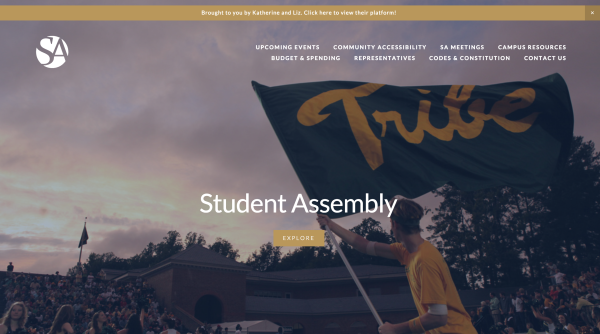 For years, candidates for Student Assembly President have promised to build websites to increase the transparency of the student government. Just as regularly, the websites have failed to materialize, succumbing to some mix of bureaucratic inertia, technical difficulties or the confusion of administrations in transition.

The present election cycle has stayed true to form, with each presidential hopeful vowing to deliver a website if elected. In a bid to demonstrate that they will not follow the rest of the familiar tradition, however, presidential contenders Katherine Ambrose ’17 and Liz Jacob ’17 actually launched one March 17 — just over a week before election day.

This website, which is not complete, includes spaces for budget details, upcoming campus events, information on executive and senate members, the SA code and constitution, and campus resources. The top of the website’s homepage links to Ambrose and Jacob’s platform. The site, whose URL was purchased by the Ambrose campaign, demonstrates a break with the site proposed by Student Assembly President Yohance Whitaker ’17, which is set to be hosted on wm.edu, and which has been held up since the fall.

“This is something we took on for our campaign, this is not something we had been prompted to do by current administration,” Ambrose said. “This was more of an effort on the behalf of our campaign and our platform than something we were doing in our current roles.”

Ambrose is Class of 2017 President.

Ambrose and Jacob began working on their website before spring break with the help of a student from the computer science department, who built their website and taught them how to use it. Having a student build the website was important to the pair, because they hoped it would further the sustainability of an SA website.

It was important for us [to make the website], because a lot of the stuff we talk about hinges on having a virtual space for open communication. We recognized the need, and once we recognized it, we saw a way to connect it to the bigger goals. — Liz Jacob ’17

Part of their campaign includes using the SA website as a tool to get anonymous feedback from students on questions and concerns they have about issues on campus. Additionally, it also includes posting newsletters, meeting minutes and other SA information to the website on a monthly basis.

“It was important for us [to make the website], because a lot of the stuff we talk about hinges on having a virtual space for open communication,” Jacob said. “We recognized the need, and once we recognized it, we saw a way to connect it to the bigger goals.”

The website is not complete, but according to Ambrose and Jacob, it is a prototype of the site that will be launched if they are elected. They said they will either update this website or launch a separate one.

According to current senator Danny O’Dea ’18, Ambrose and Jacob’s campaign is one of the first to actually carry through with their website promises.

“It seems as though every platform for Student Body President for the past several years, as well as many for Senate and Class President, have been centered around either updating or creating altogether a new and functioning website,” O’Dea said in an email. “Katherine and Liz, to my knowledge, are the first ones to actually step out on a limb to show the student body that it won’t be just an empty promise with them, they’ve already started doing the leg work and are ready to go.”