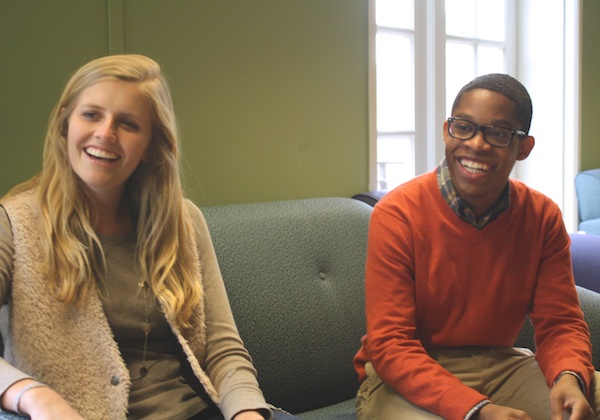 After three years of serving as a senator for the class of 2016, Whitaker said he felt he had a firm grasp of what SA was, how it worked and how it could be improved. Pinkerton said that SA’s ability to turn ideas into reality was what motivated her to run.

“Yohance and I met, and he told me that the Student Assembly is one of the only organizations on campus that has a connection to the administration, to the students, [and] to the greater Williamsburg community and has the leadership ability and the ideas with the money to back it,” Pinkerton said. “And so that was what sold me … just the promise and idea of knowing that my ideas would definitely be heard and definitely have the support and the money.”

While Pinkerton does not have previous experience with SA, she holds leadership roles in Camp Kesem and Kappa Alpha Theta. Whitaker chairs a finance committee within SA and serves as a resident assistant in Gooch Hall.

“We have the leadership experience, but we also have the ideas behind it so we are able to communicate our platform, and they are all very attainable goals because we have the right advocates in place,” Whitaker said.

The pair is running on a platform of three words: connect, engage and inspire. Whitaker and Pinkerton have planned initiatives related to each word for the SA should they win the election.

“Connect” is based around the SA’s responsibility to the students to be more accessible and relevant and act as a resource. Whitaker and Pinkerton would push for their “One Tribe, One Click” idea to increase transparency within both the SA and College’s websites so that resources are more easily found — in just one click. An alumni and upperclassman mentor program and an initiative to ensure students’ voices are heard are also under the “connect” umbrella.

The pair’s emphasis on engaging students focuses on two topics: the affordability of college and health services. Whitaker and Pinkerton plan to offset the rising textbook prices by creating an SA-sponsored rental and buy-back program. The pair has also considered encouraging the SA to purchase textbooks for large, introductory courses that would be housed in departments and be available for student use.

“The way we are envisioning that program is that rather than having students sell their books back to the bookstore or back to the vendors who stand outside of the Crust and Wawa and things like that, students would be able to sell-back their books to the Student Assembly,” Whitaker said. “The Student Assembly would be able to rent or be able to sell those books at a cheaper price because we’re not in it for the money.”

Currently, the College bookstore also has a rental and buy-back program, but Whitaker is not concerned about potential push back from administration due to the competition this program would create.

The pair also believes the SA should be focused on ensuring resources for mental, physical and emotional help are available and accessible. They plan to continue the subsidizations providing for STI testing and flu shots but also would like to partner with the Student Health Center to provide rape kits for students in the event of a sexual assault.

Whitaker and Pinkerton’s third tenet — inspire — promises a focus on sustainability for the College going forward, as well as an emphasis on recreating “One Tribe, One Family.” With their “Open Ears, Open Hearts” platform, the pair said they plan to lead in such a way that is inclusive and respectful to all students, thereby encouraging a more inclusive College community. To encourage creativity, the pair has developed a Kickstarter campaign that would support and fund student organizations with promising missions to ensure proper resources.

Primarily, the pair hopes to effect lasting change through the opportunities granted as president and vice president of the SA.

“One of the reasons that I’m really excited about [running for SA president] is that the Student Assembly is that organization that can create meaningful change, that can start conversations, that can connect students to resources, that can advocate and engage for them at William and Mary and off-campus and that can lead in the way that puts meaning back in one tribe, one family, and that inspires them,” Whitaker said.