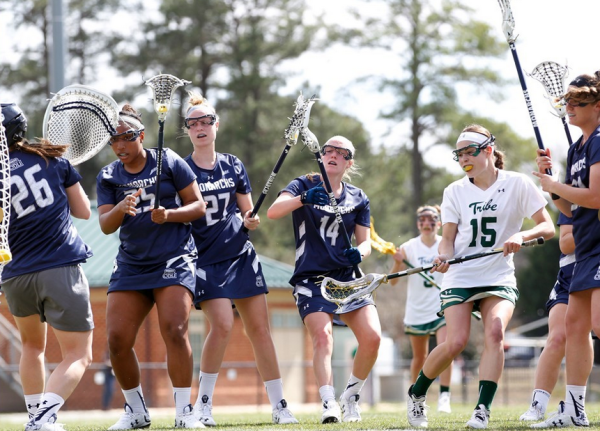 William and Mary has had a tendency over the past few seasons to dig itself into substantial early-season holes with a string of losses by mid-March before engaging in competitive games. Such deficits, like the 2-4 start last year and a 1-5 start the season before, evolved into graves for the seasons, as the early games foreshadow 5-11 and 4-12 seasons. The pattern has held since 2012.

Yet the 2016 edition of the Tribe (3-3) just passed another benchmark with the 17-14 victory over Old Dominion (4-2) at Martin Family Stadium in Williamsburg, distancing themselves just a little further from the long and dismal shadow of recent seasons. The March 10 victory over the Monarchs marks the first time since 2010 that the College has managed three victories by March 10.

In the third home game of the season, the Tribe opened with a defensive stand, rejecting two shots on goal and then capitalizing on the counterattack with a goal at 27 minutes 28 seconds by junior midfielder Shannon Quinn. A pair of Tribe turnovers, coupled with two failed clears allowed ODU to notch an early 2-1 lead by 23:12.

The quick flurry of mistakes on the College side proved to be a fleeting issue, as the Tribe tied the game at 21:12 off a free position opportunity by sophomore midfielder McKinley Wade. Under a minute later, the College maintained the initiative with a draw-control straight to goal at 20:51. Sophomore attack Abby Corkum gained the possession, while junior midfielder Lindsey Jenks fired the shot for the 3-2 lead.

And just like that, the Monarchs never led the game again.

We came out really strong,” head coach Hillary Fratzke said to Tribe Athletics. “ODU did a great job keeping themselves in it mentally, when they had the opportunity to fight back, they absolutely took it. They went to goal hard and they were able to finish their shots.”

“We came out really strong,” head coach Hillary Fratzke said to Tribe Athletics. “ODU did a great job keeping themselves in it mentally, when they had the opportunity to fight back, they absolutely took it. They went to goal hard and they were able to finish their shots.”

With a variety of contributions to a 6-0 run, the College featured team-first offense with goals by freshman midfielder Maddie Torgerson, senior attack Michelle Goss, Quinn, Wade and Jenks. A pair of ODU goals fractured the scoring run, but nevertheless, the Tribe offense kept finding the back of the net. At halftime, the score stood 10-4 in the College’s favor.

Although a six-goal lead may suggest otherwise, the Tribe faced fierce opposition the entire half. ODU narrowly lost the draw control count (7-8) and turnover battle (13-11), and forced 14 clear attempts on the part of the Tribe. Penalties sunk the Monarchs’ defensive efforts, as the College was a perfect 4 of 4 on free position shots.

While the Tribe prevailed in the first half, the tables turned in the second, as ODU built a 21-11 shot advantage and won the turnover battle 9-4. The Tribe stayed competitive in three main areas to secure the win: shot percentage, saves and draws.

“When we really needed the draws, we did a good job of fighting for them and contesting it,” Fratzke told Tribe Athletics. “Even if they came up with it, we mostly slowed them down, which was great.”

A 9-9 stalemate on draws prevented ODU from building enough momentum for a comeback. Nine second-half saves by junior goalkeeper Alex Lista further frustrated the Monarchs. Lista finished her day with a solid 12 saves on 26 on-goal shots, a 46 percent save percentage. As a point of reference, the top goalie in the country, Kelsey Duryea of Duke, posts a 56 point save percentage.

Although the Tribe offense only managed 11 shots in the second half, seven of those soared past the keeper to secure the win. The College earned them relatively early into the second half as well, holding a 15-8 lead with just over 14 minutes of action remaining. A 4-0 run by the Monarchs cut the lead to three with four minutes to play, but then Quinn and Corkum put the game on ice with a goal apiece. Quinn’s score marked her sixteenth tally of the season, and fourth of the day.

When we really needed the draws, we did a good job of fighting for them and contesting it,” Fratzke told Tribe Athletics. “Even if they came up with it, we mostly slowed them down, which was great.”

A couple Monarch scores in the waning seconds proved too late an effort, and the Tribe is back at .500 with the 17-14 victory.

Up next for the College is another midweek home game as the Tribe plays host to the Huskies this Wednesday at Martin Family Stadium. UConn has received votes for a top-20 ranking but is not currently ranked. Start time is set for 7 p.m.