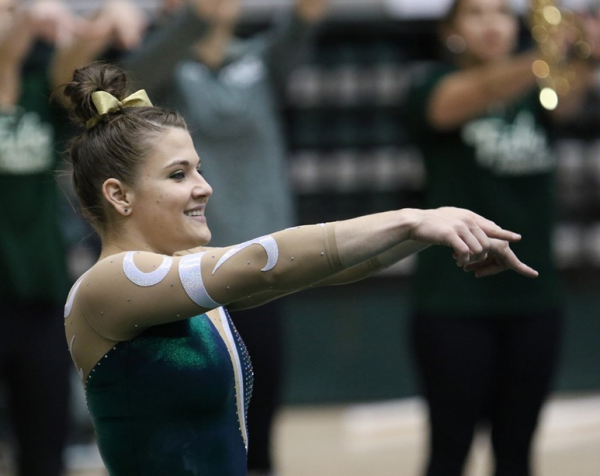 William and Mary women’s gymnastics nearly earned their third consecutive Eastern College Athletic Conference title Saturday, tying for second with Brown at Kaplan Arena . Champion Cornell took first place with a score of 193.925 points, narrowly defeating the Tribe, who tallied 193.550. This second-place finish occurred despite College gymnasts finishing first in three out of four events, as well as in the all-around results.

Senior Brittany Stover captured the ECAC Athlete of the Year award for the third straight season by taking home victories with stunning performances in the balance beam (9.875) and vault (9.850), as well as putting in solid displays in the bars and floor events. The senior finished with a personal-record 39.175 all-around score, good for first at the ECAC Championships.

Senior Brittany Stover captured the ECAC Athlete of the Year award for the third straight season by taking home victories with stunning performances in the balance beam (9.875) and vault (9.850), as well as putting in solid displays in the bars and floor events.

Despite coming up just short, there were encouraging individual performances elsewhere for the Tribe. Junior Brianna Gironda finished fifth in the all-around standings, excelling on bars and beam to qualify for the all-conference team in both all-around and bars. Fellow junior Olivia O’Connor was also honored with an all-conference spot on vault, while standout freshman Aaliyah Kerr won the floor event with a 9.825.

The Tribe certainly has foundations to build on for next year. Kerr lead the team in the floor event despite being only a freshman, while fellow rookies Katie Webber, Madison Dwyer and Sophie Harris set personal records in floor (Webber) and beam (Dwyer and Harris). Senior Alyssa Glass closed out her career with a personal-best 9.500 on the bars.

Meanwhile, the College men’s team closed out its regular season by placing second out of three at a home meet between the Tribe, No. 3 Ohio State and Temple. The Buckeyes won by a distance, finishing with 437.05 points. The meet featured several strong Tribe showings, including sophomore Griffin Antle’s second place finish in the pommel horse, where he narrowly lost out to Ohio State’s Alec Yoder with a score of 14.500.

The College men’s team closed out its regular season by placing second out of three at a home meet between the Tribe, No. 3 Ohio State and Temple.

Sophomore Juan Palma also impressed with third-place triumphs in the floor and vault events. Junior Rob Meyer led the College on the parallel bars with a 14.400 score, tying for third, and freshman David Allen turned in the high bar performance of the day by scoring 13.750 and finishing sixth. In the all-around competition, junior Aria Sabbagh topped the leaderboard by scoring 79.500 across all events and trouncing the competition, scoring 18.550 higher than the next-highest finisher. Senior Keaton Ackerman came fifth in all-around with a 54.950.

The men’s team begins the postseason with the USA Gymnastics Collegiate Championships’ Team and Individual Finals in Springfield, Mass. March 25 and 26. The Tribe then hosts the ECAC Championships April 2 and 3, where they figure to be in the conversation, ranking third in the conference in all-around score average with 407.267. They then finish out the season April 16 and 17 at the NCAA Championships, located in Columbus, Ohio. The women’s team has one more event in the NCAA Regional Championships on April 2. The location has not been decided.