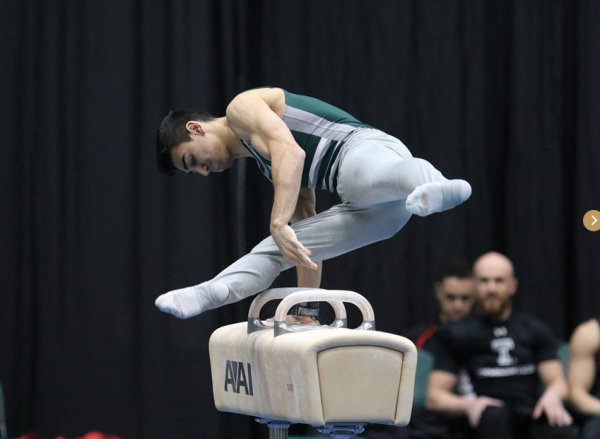 William and Mary began championship season over the weekend, taking fourth in the field of five Friday at the USA Gymnastics Collegiate National Championships in Springfield, Mass. while adding an all-around individual All-American honor before the individual event finals Saturday, where three men earned All-American honors for the Tribe.

The College’s scoring breakdown was 67.150 on floor, 65.950 on pommel horse, 65.900 on rings, 69.900 on vault, 68.700 on parallel bars, and 67.500 on high bars. Although the Tribe did not claim gold for any event of the team finals, three student-athletes qualified for Saturday’s individual finals. To cap off Friday’s events, the all-around individual event took place, where junior Aria Sabbagh took sixth to make the cut for USA Gymnastics All-America honors, scoring 79 points.

On Saturday, three other members of the Tribe joined Sabbagh on the All-America list. Junior Rob Meyer won the individual parallel bars title, scoring a career-high 14.675 in the event. Following Meyer were two freshmen, Jacopo Gliozzi and Peter Makey. Gliozzi was well within range for All-American honors with a third-place finish on pommel horse at 14.2. Makey just made the six-man list in the No. 6 spot on rings, scoring 13.275.