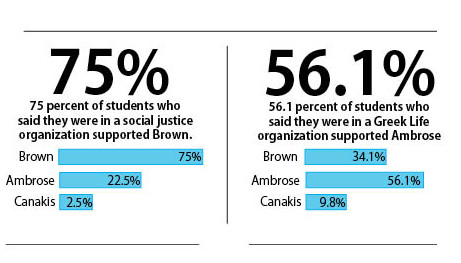 President-elect Eboni Brown ’17, who won the March 24 Student Assembly election by a margin of 39 votes, was elected with strong support from women, members of social justice organizations and those who prioritize mental health issues, a survey conducted by The Flat Hat March 18-24 suggests. Brown fared weakest among voters in Greek organizations, who were also more likely to say that they were going to vote.

The survey, which predicted Brown’s victory, was conducted by random paper ballot as well as online over email, with a sample of 137 students. The survey did not meet scientific standards of randomness and because part of the sample was self-selected, an unintentional bias may be present in the results. The survey results reflect a larger margin of victory for Brown than election results, suggesting demographic data might also be skewed toward Brown.

Ambrose is a member of Pi Beta Phi and Jacob is a member of Kappa Alpha Theta. According to Delta Delta Delta member Nia Gibson ’17, who worked on Ambrose and Jacob’s campaign, this involvement in Greek life at the College may have helped sway voters.

Of the 60 percent of respondents who identified themselves as non-Greek, only 27.6 percent supported Ambrose. 69 percent of non-Greeks supported Brown, and only 3.4 percent said they supported Canakis.

43 percent of respondents to the survey identified themselves as members of a social justice organization on campus. These students were far more likely to support Brown than they were to support either of the other candidates.

Erica West ’17 is co-president of William and Larry, the policy arm of the Lambda Alliance that advocates for increased rights of members of the LGBTQ community. She said that supporting Brown made sense for students who were active in social justice, citing Brown’s involvement in the PLUS program and with the Center for Student Diversity. She also cited posts that Brown and McKiernan have made on their personal Facebook pages advocating for social justice issues.

“A lot of what we consider is who are people we see at [social justice] events the most, who are people we can link their names and what they believe in and their faces together,” West said when asked what students concerned with diversity and other social justice issues considered when selecting a candidate. “Ultimately those people were Eboni and Hannah.”

As part of the survey, respondents were asked to rank a list of six issues in order of importance to them in this election. Mental health was the most potent issue, with the next most important issues being the effectiveness of the Student Assembly, sexual assault, transparency, diversity and, least important to respondents, sustainability.

Additionally, despite Canakis’s focus on his status as an “outsider” candidate aiming to bring vitality to SA, he lacked wide support among respondents who prioritized effectiveness of the Student Assembly as the election’s most important issue.

“We are going to spice things up,” Canakis said at the debate. “We need flavor in the Student Assembly. It is a stale piece of bread with no flavor. We are going to bring energy and excitement to the SA. … We are the Sriracha the SA needs.”

Seize the Grid Facilitator Anne Davis ‘16 worked with Ambrose and Jacob on their campaign and said that she was excited sustainability was an important issue in this year’s election.

“People always put sustainability as a shout out but they don’t always go that in depth into it,” Davis said.

She also said that while she supported Ambrose, she had friends who supported Brown and she recognized that it was a closer race than in previous years.

“I’m someone that never cares about SA elections ever … I don’t get into all that stuff,” Davis said. “This was a very tight race and even friend groups were split. It was good to see that, finally.”

I’m someone that never cares about SA elections ever … I don’t get into all that stuff. This was a very tight race and even friend groups were split. It was good to see that, finally,” Davis said.

While the prioritization of different issues addressed by the candidates comprised some of the most significant insights in the survey, there were also divisions in support along other demographic lines.

In Thursday’s election, Brown received 43 percent of the vote, Ambrose received 42 percent, and Canakis received 15 percent. In the survey, Brown was supported by 55 percent of respondents, Ambrose by 39 percent and Canakis by 6 percent. While the order in which the candidates were ranked in the survey was mirrored by the results of Thursday’s election, the percentage of votes each candidate received differed significantly from the results of The Flat Hat’s survey. The margin by which Brown won the election was a mere one percent, rather than the 16 percent predicted by the survey.