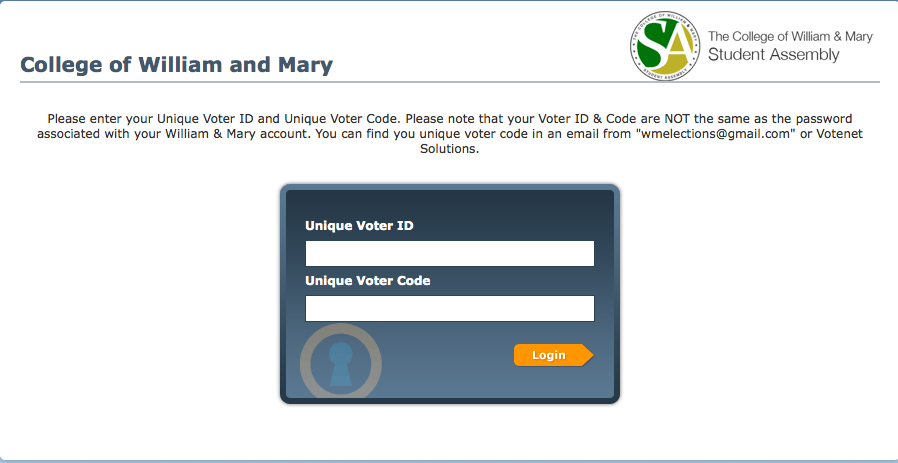 Peter Quinn-Jacobs M.A. ’18 J.D. ’18 looked forward to voting in the Student Assembly elections March 26, similar to 28.3 percent of the College of William and Mary’s students. However, Quinn-Jacobs, a Student Assembly senator, never found his ballot link and was unable to vote.

“I’m not sure how many other people had this problem, but I know that I’m not the only person,” Quinn-Jacobs said. “There’s a possibility that it’s adversely affecting graduates, which is particularly troubling because there is this perception among the graduate schools that the Student Assembly isn’t a thing for us anyways.”

Chairman of the Elections Commission Ryan Brophy ’15 received only two direct complaints from students on election day about not receiving a link to vote. One student found his link in the spam folder, and the other complaint came from Quinn-Jacobs.

Quinn-Jacobs realized that he never received a link in the early afternoon and talked to several other graduate students who also had trouble locating theirs. He spoke to Brophy on the Sadler Center Terrace later that day. Brophy helped Quinn-Jacobs check his spam folder and promised to send him a ballot link later.

“We didn’t spend too much time looking for his, because we were only on the terrace for a couple minutes before we left to go do other things,” Brophy said.

According to Brophy, trouble locating ballot links is a recurring problem.

“Nothing is a perfect system, so every year, we sometimes have a person who will, after the fact, mention that they didn’t get a ballot or some people don’t check their spam as they should,” Brophy said. “A lot of times, what we find, is that people’s spams are different.”

Additionally, Brophy mentioned that two years ago several students in the Joint Degree Programme, between the College and the University of St Andrews, did not receive ballots because the College’s Information Technology Department did not count them as full-time students.

“I think that we need to do a better job of being proactive and letting people check their spam and different folders, and warn people that it might be in there,” Brophy said.

SA Vice President Catie Pinkerton ’16 acknowledged that any issues that prohibit students from voting must be resolved.

“Students should have every opportunity to have input in how the Student Assembly governs,” Pinkerton said in an email. “While the incidents have not been confirmed, any barriers preventing students from participating in Student Assembly elections are problematic. We will work with the Elections Commission to ensure all student voices are heard.”

Brophy does not believe that the low turnout of this year’s election corresponds with issues locating the voting link at all.

“I think the low turnout was [due to] — it’s hard to say with any specifics — … a number of factors,” Brophy said. “Our low candidate count — only two tickets running — probably lowered the overall turnout.”

The Elections Commission receives the list of eligible voters from the Office of the Vice President for Student Affairs, which receives the list from the College’s IT Department. This final list included the names of 8,338 undergraduate and graduate students.

The last major problem with electronic ballots occurred in 2007 when former Elections Commission member James Evans ’07 lost the voting results when he pressed the wrong button.

The College instituted online voting in 2000.