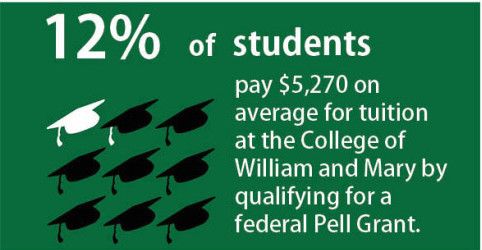 The College of William and Mary is the least socioeconomically diverse college in the United States with only 12 percent of students receiving Federal Pell Grants, according to a March 2016 report from the New America Foundation.

Any student who fills out the Free Application for Federal Student Aid is automatically considered for the Pell Grant, a form of federal financial aid that does not have to be repaid and is awarded to the undergraduate students with the most financial need nationwide.

According to the report, a common trade-off for the percentage of Pell Grant students enrolled is the average net price charged to students with the most financial need: schools with less low-income students tend to offer the ones they do have a better deal. Although the College has the lowest percentage of Pell recipients, it is not among the five most affordable public universities to students with total family incomes of 30,000 dollars or less.

According to Associate Provost for Enrollment and Dean of Admission Tim Wolfe ’95 M.Ed. ’01, the College is the only public university in the state to meet in-state students’ full demonstrated financial need in grants.

Expanding financial aid capabilities, including to out-of-state students, is a priority for the College’s billion-dollar For the Bold campaign. By 2020, the College seeks to raise $350 million in scholarship money. Director of the Center for Student Diversity Vernon Hurte noted this funding is critical in providing students from low-income backgrounds access to the College.

“As I’ve spoken to many students and families over the years, it is clear to me that many are attracted to what William & Mary has to offer; however, it often comes down to affordability,” Hurte said in an email. “This campaign will be a major part of making William & Mary more accessible to students from low-income backgrounds. We never want a student’s decision to not attend William & Mary be based on their inability to afford to come.”

The challenges for low-income students, however, do not end after enrollment. Students at a William and Mary Scholars Undergraduate Research Experience seminar noted feeling conflicted about their ability to succeed at the College.

Christine Fulgham ’17 is one of these students.

However, after voicing these concerns, Fulgham’s professors assured her that she belonged and would succeed. Fulgham is now an Honors Fellow at WMSURE.

Established in 2010, WMSURE is a faculty-led program that provides resources in undergraduate research to students who have overcome significant adversity or are members of underrepresented groups on campus. Students in the program have the opportunity to participate in workshops, receive advising and conduct research on campus year round.

“How many of you are the first one in your family to go to college?” co-director of WMSURE and English, linguistics and Africana studies professor Anne Charity Hudley asked at a WMSURE workshop.

Most hands of the students sitting at the computers in Earl Gregg Swem Library’s Dulin Learning Center went up.

Hudley said she ultimately co-directs WMSURE because she simply believes it should exist.

“I know sometimes people do a lot of argumentation — oh, diversity adds to the richness of thought, the values in the class,” Hudley said. “Have you heard that? That’s legit, but I think on this campus sometimes, we don’t say enough — you just deserve to be here.”

I know sometimes people do a lot of argumentation — oh, diversity adds to the richness of thought, the values in the class,” Hudley said.

Hudley called the College’s Pell Grant news a “catastrophe.” Hudley, however, said she was pleased with the level of faculty support she has received thus far for WMSURE. At a recent WMSURE faculty workshop Hudley held, the room was full of professors, most of whom she had never met before.

Although the College hopes to improve the 12 percent Pell Grant statistic, Wolfe noted that there are limitations to defining socioeconomic diversity solely through the proportion of students receiving Pell Grants.

“It is based on a specific federal formula that lacks the more thorough assessment of financial need conducted by our Financial Aid staff,” Wolfe said in an email. “As a result, there are students enrolled at William & Mary who might miss qualifying for Pell Grant eligibility, but who still have significant financial need met through university resources.”

According to Wolfe, one issue the College has in increasing representation of low-income students is the small size of the potential applicant pool. Out of 88,000 SAT test takers in 2015, less than one percent of students who scored a 1200 or higher on a combined reading and math score reported a household income of 40,000 dollars or lower.

According to Financial Aid Office Director Ed Irish, at the College, out of the 35 percent of undergraduates who receive need-based financial aid, 32 percent of them are also Pell Grant recipients.

For the Bold prioritizes this goal. Although she acknowledged the importance of raising scholarship money, WMSURE undergraduate fellow Ebony Lambert ’16 noted feeling uncomfortable about the festivities surrounding the campaign.

A Pell Grant recipient and first-generation college student, Lambert said money has always been a problem for her family. Growing up in Richmond a few blocks away from neighborhoods she described as “really terrible,” Lambert said she learned to make do with the resources she had.

“When the tent went up for homecoming, for the campaign launch, I was just looking at this thing like this thing is probably worth more than my entire family has ever made,” Lambert said.

When the tent went up for homecoming, for the campaign launch, I was just looking at this thing like this thing is probably worth more than my entire family has ever made,” Lambert said.

From her own community at home, Lambert observed that several of her qualified classmates in high school did not apply to the College because they felt their physical appearance, background or socioeconomic status would make them outsiders.

In order to make an environment more welcoming to low-income students, Lambert said that the College needs to provide better services, not only financially, but also socially and academically. For her, WMSURE was one such program that helped her gain access to research and a supportive community.

At the Center for Student Diversity, Hurte pointed to two other transition programs for this purpose: Preparing for Life as a University Student and the SPAN Peer Mentoring Program. Although neither are specifically for low-income students, both are designed to support under-served and underrepresented students at the College.

Ultimately, Hurte said that every student admitted to the College belongs at the College.

“William [and] Mary admits the best and brightest from around the world, some of which just happen to be students of color, students from low-income backgrounds, etc.,” Hurte said in an email. “The facts speak for themselves. Every student admitted to William & Mary comes with records of incredible academic and leadership achievement. Period.”