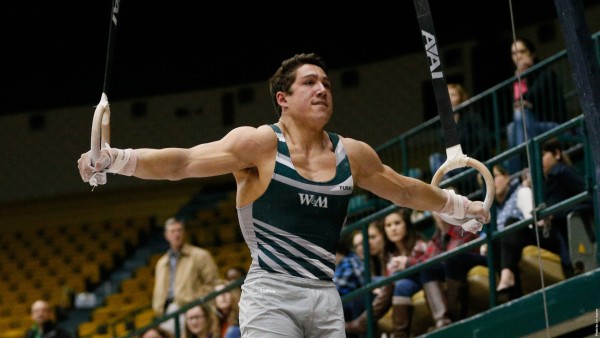 William and Mary continued the postseason this weekend, the men hosting the Eastern Collegiate Athletic Conference Championships at Kaplan Arena while senior Brittany Stover participated in the NCAA Athens Regional for the women.

The men posted their best score of the year at Saturday’s team meet, posting 416.85 points to take second place, as Navy and Army tied for first with 423.4 points. Nine Tribe student-athletes competed in Sunday’s individual meet.

Seniors Keaton Ackerman and Nick Van Dyke qualified for five events combined, with Ackerman posting a 13.85 in pommel horse, 14.35 in vault and 14.1 in high bar. Van Dyke notched a 14.6 on rings and 14.95 on vault, both ranking in the top four in program history. Senior Adam Avant scored a 14.5 in the floor event, good enough to join his teammates at Sunday’s event.

Senior Adam Avant scored a 14.5 in the floor event, good enough to join his teammates at Sunday’s event.

Sophomore Griffin Antle earned a 14.3 on pommel horse and a 14.05 on parallel bars, also qualifying him for Sunday’s action.

Stover ended her collegiate career in Athens, Ga. Sunday, finishing 12th in all-around. Stover’s 39:125 puts her at ninth best in school history, and earning her highest ever score at regionals, which she appeared in all four years with the College. She ends her career as a three-time ECAC Athlete of the Year and two-time ECAC champion.

The men’s team will now look forward to the NCAA Championships April 15-16. Both teams fared better individually than in their team finishes throughout the season, the younger members of each team showing bright spots for the future of the program.