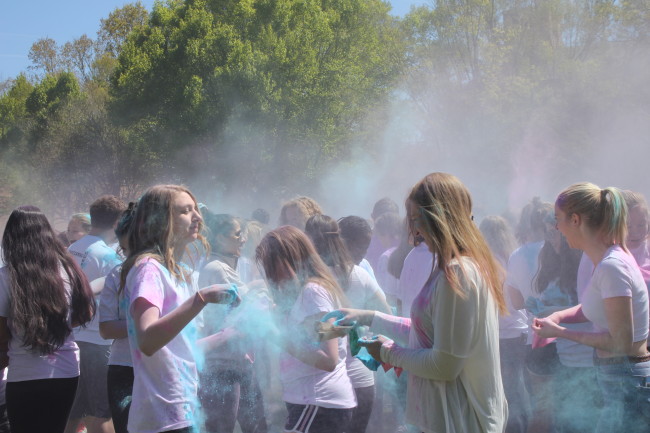 The entire world exploded with color — joyful chaos. In mere seconds, what was an immaculate canvas of hundreds of white shirts became a grand work of art splattered with a powdered rainbow. It’s Holi once again at the College of William and Mary.

The traditional festival, which has been put on at William and Mary by the Hindu, Sikh and Jain Students Association for the past several years, takes its name from a goddess, Holika, in the Hindu scriptures. On the eve of the Holi celebration, bonfires erected around the world pay tribute to the story of the demonic goddess’s fiery demise, symbolizing the triumph of good over evil.

“The whole holiday is about being inclusive, because when you put color on everyone, then you don’t see any differences between each other,” Jodhpurkar said. “It’s all about coming together and seeing that no matter what outward differences we have, we all share an identity as human beings.”

The whole holiday is about being inclusive, because when you put color on everyone, then you don’t see any differences between each other.

2016 marks the second year that HSJA President Pallavi Rudraraju ’17 celebrated Holi at William and Mary, but the first that she managed the festivities.

“Our main goal of Holi is to break down barriers and distinctions,” Rudraraju said. “At William and Mary, we try to say that we’re one family, but I’d say we’re more a collection of groups that oftentimes just don’t understand each other. In these 15 minutes of fun, HSJA wants people to drop their worries and enjoy the company of hundreds of people they don’t even know.”

As nearly 200 students rushed to and fro through the Sunken Garden, they quickly learned that screeching their battle cry came at a high cost: a mouth full of whatever color happened to be thrown their way. Hindi and Punjabi music blared as participants waged an amiable war against friend and stranger alike, discovering the true meaning of Holi firsthand.

Despite its cultural significance, Holi can be celebrated on many levels, according to Sraavya Poonuganti ’19.

“My favorite part about Holi is that it’s socially acceptable to throw stuff at random strangers,” Poonuganti said.

As the colorful explosions died down and order was restored to the Sunken Garden, the students of William and Mary were left with two things to ponder: a new sense of community with their neighbor, and a question — “Why does purple seem to be the only color they keep blowing from their noses.”