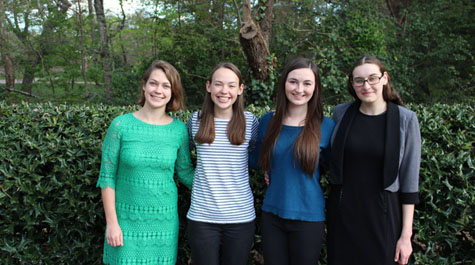 After pulling an all-nighter to finish a term paper, Bernadette Deschaine ’17 woke up from her nap to see a text from a friend: “Hey, congratulations!! :)” Unbeknownst to her, Deschaine and two of her fellow classmates at the College of William and Mary had just been selected as recipients of the Goldwater Scholarship.

From a pool of 1,150 applicants from 415 institutions for up to 260 spots, Deschaine, Melissa Guidry ’17 and Lyuba Bolkhovitnov ’17 were selected as Goldwater Scholars. Jessica Joyce ’17, the College’s fourth nominee, received an honorable mention.

Established in 1986 to honor Sen. Barry Goldwater, the Goldwater Scholarship and Excellence in Education Program recognizes notable undergraduate students who seek to pursue research careers in science, math and engineering.

Each scholarship is awarded to rising college juniors and seniors by merit; the amount received is based on need up to $7,500 annually for the remainder of their undergraduate career.

Guidry, the first recipient in physics since 2007, became interested in the field during her senior year in high school.

“That’s about the time when we first directly detected the Higgs boson and about that time I realized there was still a lot of physics left to be discovered, so that was really exciting for me because I thought things were pretty much figured out,” Guidry said.

That’s about the time when we first directly detected the Higgs boson and about that time I realized there was still a lot of physics left to be discovered, so that was really exciting for me because I thought things were pretty much figured out,” Guidry said.

Although Guidry initially began researching particle physics at the College, she realized she wanted something more hands-on and said in the future she hopes to study quantum optics in a doctoral program, working to reduce quantum noise with applications toward quantum computing, atomic clocks, and gravitational wave detectors.

Now a physics and applied mathematics major, Guidry has researched quantum optics at the National Institutes of Standards and Technology and is a participant in the Laser Interferometer Gravitational-Wave Observatory Science Collaborative.

Her advisor, physics professor Eugeniy Mikhailov, said that although the student-advisor relationship is usually a “long road to fruitful collaboration,” with Guidry, progress happened almost instantaneously.

“I gave her an assignment, and the next day I was already asked new questions — what’s the project status, what we should do next, that kind of stuff,” Mikhailov said. “It was extremely intense, I would put it that way. As an advisor, I usually have a more luxurious life, I usually have a week between meetings, and in this case, very often, Melissa was waiting for me, having some questions or stuff to report.”

Like Guidry, Bolkhovitnov discovered an interest in her field during high school. Since joining biology professor Margaret Saha’s developmental neurobiology lab in the spring of her freshman year, Bolkhovitnov has been studying neuroplasticity during the early development of African clawed frogs.

“When I came to William and Mary, I kind of had the neuroscience stuff in the back of my mind but I thought — you know what, I’ll just take pre-med stuff, I’ll just go to med school — but I realized research is actually really cool,” Bolkhovitnov said. “So I think my involvement has definitely steered me in that direction.”

When I came to William and Mary, I kind of had the neuroscience stuff in the back of my mind but I thought — you know what, I’ll just take pre-med stuff, I’ll just go to med school — but I realized research is actually really cool,” Bolkhovitnov said.

According to Saha, who is her advisor, Bolkhovitnov is known for taking initiative and solving problems.

“Probably the most impressive characteristic about Lyuba is her willingness to take risks and assume challenges,” Saha said in an email. “She was willing from her freshmen year onwards to take on a very technically difficult project where she needed to work out so many different techniques. She never wavered and calmly and consistently and creatively worked out every challenge.”

When not in the lab, Bolkhovitnov volunteers at the greenhouse, where she runs the social media page, and works on service projects with Alpha Phi Omega.

Deschaine, a biology major, first became fascinated in the subject by the cooperative aspects she saw in nature. Since her sophomore year, she has been working in biology professor Helen Murphy’s evolutionary biology lab and for her honors thesis will research the disruption of biofilms, modeling those formed by fungal pathogens that can grow on medical devices.

When not studying biology, Deschaine can be found working in the Writing Resources Center.

“I like being able to work with the writing center because as a science major, I don’t do as much writing as people in a lot of different majors probably do,” Deschaine said. “So I like to work with students across a variety of majors who come in with all sorts of different paper topics, and being able to help them with that, but also keep myself refreshed on what it’s like to write across other disciplines, what it’s like to answer different questions.”

Murphy described Deschaine as a student who takes great joy in learning. She cited a few moments in which Deschaine demonstrated particular enjoyment of her research.

“One lab meeting when we read a paper about cheating and cooperation in microbes, she became absolutely giddy with the prospect of getting her research started and could barely contain her excitement,” Murphy said in an email. “I also have a fond memory of her bouncing her way through the lab, smiling to herself, and when I asked her about what was going on she admitted she was thinking about some parasites she had just learned about.”

After graduating, Deschaine hopes to attend graduate school and gain experience working in a biomedical lab.

For her future research, she said that she hopes to study the interaction between the human immune system and different microorganisms and parasites.

Although the Goldwater Scholarship news is still settling in for her, Deschaine said she is most excited because it allows her to do more of what she loves — research.

4/19/2016 11:49 a.m. An earlier version of this article incorrectly referred to Melissa Guidry ’17 as a student in a doctoral program. She is an undergraduate at the College.