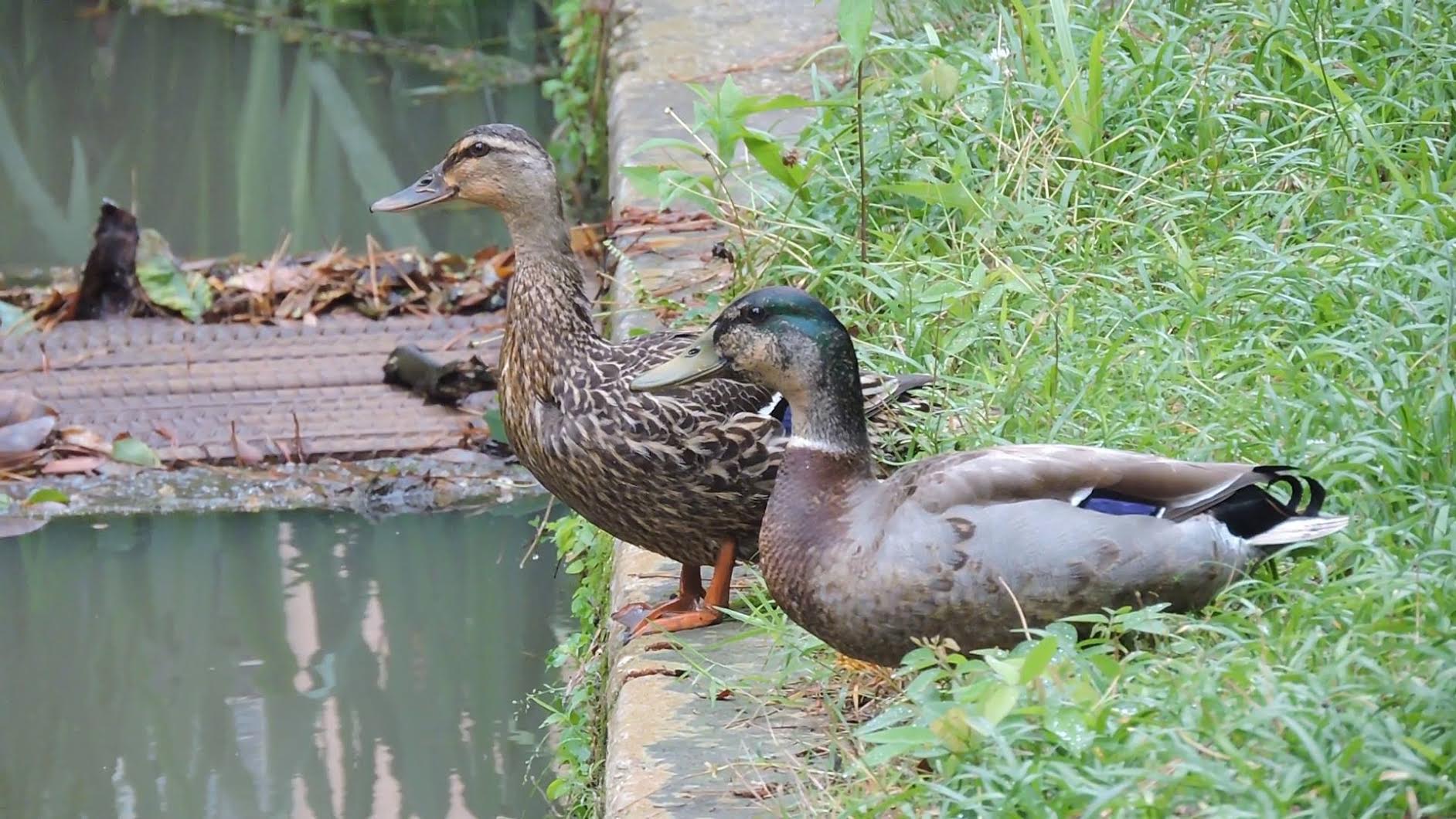 If next week on the way to one of your finals, you walk by the Crim Dell, spot the ducks and jealously think to yourself,  ‘Those ducks have it easy,” you won’t be wrong. With plenty of food, strong bonds with each other and students and faculty to look out for them, the Crim Dell ducks are living the good life.

The ducks that students see in front of the Crim Dell and the Grim Dell are mallards, one of the most common breeds of duck. According to Bird Club President Megan Massa ’18, they most likely also have some amount of domestic duck in them — the breed of duck that is raised for human consumption. Mallards have adapted to living near humans over the years, making the Crim Dell ducks at home on a college campus.

“They are the most hunted species of waterfowl,” biology professor Dan Cristol said in an email. “Yet they move right in with their enemies and make themselves at home in places where hunting is not allowed.”

Massa said that the fact that students often feed the ducks makes them happy to be living on the College of William and Mary’s campus.

“There’s no nutritional value to bread, so if your entire diet is that, it’s not good,” said Seeberger

“You see it a lot in any kind of bird that’s in an urban area,” Massa said. “Since they interact with people so regularly they aren’t quite as skittish, and the reward of getting handouts from people is definitely something that makes them want to be less afraid of people.”

Although the ducks are happy when people give them food, Massa said students should be careful about what they feed them. Most students on campus bring bread to the ducks, but according to both Massa and Cristol, this is not great for the ducks’ health.

Sarah Seeberger ’16, who has gotten involved with the ducks over her time on campus, had been making the mistake of feeding the ducks bread before she realized the harm it caused.

“I fed them bread, which is a big no-no,” Seeberger said. “I didn’t know that at first. So after I started feeding them, I was like, ‘You know what, if my diet was entirely bread that probably wouldn’t be good.’ So I did research, and it’s actually the same for ducks. There’s no nutritional value to bread, so if your entire diet is that, it’s not good.”

“On the positive side, though, unlike other ducks, these ducks live in a paradise free of human duck hunters with shotguns and with abundant food,” Cristol said in an email.

Massa said giving bread to ducks could also be bad for the water on campus and could even lead to a permanent disability for the ducks.

“Bread isn’t really good for the digestive system,” Massa said. “Which can lead to them having digestive problems, which can lead to water pollution, and there is a condition called angel-wing. Their wings get messed up if they eat bread enough. It hasn’t happened [to] any of the Crim Dell ducks, but it’s a concern for any kind of animal that you’re feeding bread.”

Massa said students could feed the ducks vegetables as a healthier alternative. However, Seeberger said that she experienced some difficulties when she made the switch to vegetables for the ducks.

“So I did some more research on what to feed ducks,” Seeberger said. “And they like seeds and vegetable, and like corn, things like that. I tried to feed them that, and they didn’t like it because so many people had been feeding them bread, so they’re just so used to being fed bread by students, which isn’t good.”

Seeberger actually bought real duck feed from a Tractor Supply store that she currently uses to feed the ducks. The ducks have responded more positively to the feed than the original vegetables, according to her.

Seeberger feeds the ducks regularly and said that students should also be considerate of the ducks by not making sudden movements around them. As long as students avoid that, they should feel free to interact with the ducks, which Massa and Seeberger have both done.

“Some of the ducks are very, very trusting. I will feed them and they will eat it right out of my hand,” Seeberger said. “They will literally approach you if they think that you have food.”

Cristol also said that students should feel comfortable approaching the ducks, though they should avoid outright touching the ducks. Students also shouldn’t worry too much about the ducks’ health and safety, he said, as they are adapted to and comfortable in their environment, although predators do exist in the area.

“Nature is red in tooth and claw, and a fox or an owl could grab a duck any night of the week,” Cristol said in an email. “On the positive side, though, unlike other ducks, these ducks live in a paradise free of human duck hunters with shotguns and with abundant food thanks to the over-fertilization of the Sunken Garden, which creates an abundance of algae for them downstream.”

Cristol also said students had nothing to worry about in regards to the male duck that has been seen limping on campus. Several students posted photos of the duck on the Overheard at William and Mary Facebook page this semester.

Seeberger actually had posted about the duck in late March and contacted several animal rehabilitation centers about it. The St. Francis Pet Resort and Rehabilitation Center in Williamsburg was willing to take the duck in, but transporting the duck was up to Seeberger.

“In fact, if I lost a foot I’d probably retire from teaching and go join him,” Cristol said in an email.

“Nobody was willing to come get the duck. I was going to have to capture the duck myself,” Seeberger said. “And me and one of my friends — she’s pre-vet — she and I actually went out in the morning with a duck box and were ready to capture the duck and bring him to the rehab center.”

Seeberger, who calls the duck Nemo after the movie character, could not find the duck that morning. She talked to Cristol that afternoon, who told her that it was best to leave the duck as he is, in an environment with food and his friends.

“He can swim with his other foot, he is not starving and the other ducks aren’t ostracizing him,” Cristol said about the duck in an email. “In fact, if I lost a foot I’d probably retire from teaching and go join him.”

Massa also said that the duck would be best left on campus.

“In the habitat that he’s in, that bird, he walks fine, he swims fine, he flies fine and he’s in a habitat that’s incredibly bountiful with food,” Massa said.

Cristol also added that sending the duck away from campus might do more harm than good because of the kind of life he would have after leaving.

“I think if he were captured and sent to an animal rehabilitator he would spend the rest of his life in a 3×3 foot cage with a few hours a week in a kiddie pool,” Cristol said in an email.  “He’d never be released because that foot is not functioning at all, probably has no feeling in the limb at all. If ‘rescued’ he’d have no chance to sire offspring and carry out his biological imperative, no poker night with the turtles, no fun at all, no adventure, just endless years in that cage.”

Undoubtedly, this duck will take it all in stride, like water off his back, as the College is a fitting home for these mallards.