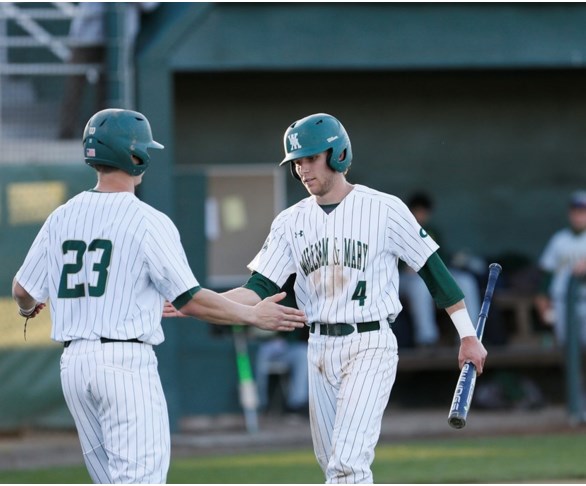 William and Mary hit a rough patch this week, dropping two straight to fall to 17-20 on the season. Tuesday, the College did not have the batting power it needed, losing 6-3 to Norfolk State. The following night, the Tribe simply could not do anything to slow down powerhouse No. 16 North Carolina, ultimately falling 17-2.

The College (20-20, 9-5 CAA) started strong against Norfolk State (20-16, 13-4 MEAC), as senior center fielder Josh Smith hit a two-RBI double to drive home junior right fielder Charles Ameer and senior designated hitter Ryder Miconi in the top of the second inning. In the third inning, the Spartans evened the score at 2-2.

Norfolk State came back right away, driving in two runs on a double in the bottom of the fifth to put the College in a 4-3 deficit.

With the game tied, sophomore second baseman Cullen Large responded with a big triple, driving home sophomore left fielder Ryan Hall in the top of the fifth inning. Large’s teammates were unable to match his success at the plate, as he ended the inning still stranded on third. Norfolk State came back right away, driving in two runs on a double in the bottom of the fifth to put the College in a 4-3 deficit. From this point, the Tribe could get nothing going offensively and ultimately fell 6-3.

As a team, the College managed just three hits in 29 at-bats on the evening. Of the three hits, Large had two. On the pitching side, freshman left-handed pitcher Kinston Carson picked up the loss, falling to 1-2 on the season. Besides Carson, the Tribe rotated in three other pitchers, none of whom had much success against the Spartans’ lineup.

Looking to recover from their Tuesday loss, the Tribe traveled to Chapel Hill, N.C. to take on 16th-ranked North Carolina (26-15, 9-12 ACC) The Tar Heels gave the Tribe a rude welcome, piling up seven runs in the first two innings en route to an 8-0 lead after three.

North Carolina responded resiliently in the bottom of the fifth, rattling off five runs to push the lead to 13-2.

In the fourth, senior first baseman Charley Gould got the College offense going, hitting a single down the right side to drive home redshirt-freshman shortstop Kyle Wrighte and advance Large to third. Shortly thereafter, Miconi hit a sacrifice fly to send home Large and cut the Tribe deficit to six, 8-2. North Carolina responded resiliently in the bottom of the fifth, rattling off five runs to push the lead to 13-2.

Four more Tar Heel runs in the seventh inning ensured the College its second straight loss. Large again delivered a strong performance offensively, going two of four at the plate with a run.

The Tribe used seven different pitchers on Wednesday, none for more than two innings. Sophomore right-handed pitcher Robert White picked up the loss, falling to 1-2 on the season.

The College will look to recover from two straight losses when the team heads to Boston, Mass. to take on Northeastern in an important three-game Colonial Athletic Association series.