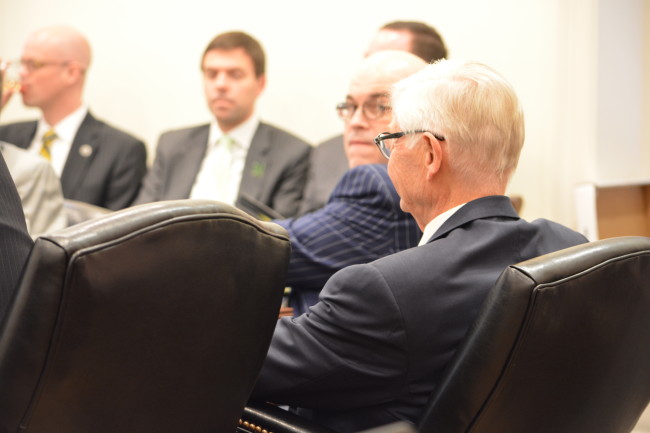 The College of William and Mary’s Board of Visitors unanimously approved the Fiscal Year 2016-2017 budget Friday, April 15, reaffirming its commitment to stable tuition rates and financial aid, increasing faculty and staff salaries, and securing funding for new diversity and graduation rate initiatives.

State funding for the College increased 5.29 percent for the fiscal year beginning July 1, including over $1 million dollars for salary and benefit increases and $1.2 million for new facilities, university completion, and various initiatives. Non-general funds, principally comprised of tuition, will increase 5.95 percent for fiscal year 2016-17.

For the first time, in fall 2016, all four graduating classes of in-state students will have the William and Mary Promise — the guarantee of four years of stable tuition. Increasing 12.13 percent from the Class of 2019, the class of 2020 will pay a flat tuition of $15,674.

According to Senior Vice President for Finance and Administration Samuel Jones ’75, M.B.A. ’80, the Promise is meant to ensure families can accurately judge tuition rates over the full four years at the College.

“That was the intent — to put some stability into what was a very volatile aspect of the total cost to come here, which was tuition,” Jones said.

That was the intent — to put some stability into what was a very volatile aspect of the total cost to come here, which was tuition,” Jones said.

However, with guaranteed in-state tuition rates, the College will not be able to respond as quickly to fluctuations in revenue due to market volatility and uncertainty in state funding.

“If the state was to cut our budget significantly, I’m not going to renege on my promise to you and all of the other families,” Jones said. “So our flexibility to respond is limited [by implementing the Promise], but that’s a risk we were willing to take.”

According to Vice President for Strategic Initiatives Henry Broaddus, the College is one of the most affordable for those in-state students on financial aid.

“William and Mary has the third lowest net price for a Virginian in the Commonwealth among all four-year [institutions]—only UVA Wise and Norfolk State offer a lower net price if you qualify for need-based aid,” Broaddus said.

William and Mary has the third lowest net price for a Virginian in the Commonwealth among all four-year [institutions]—only UVA Wise and Norfolk State offer a lower net price if you qualify for need-based aid,” Broaddus said.

Out-of-state undergraduate tuition, which applies equally to all social classes, will increase by 2.9 percent to a total cost of $53,656.

With 33.5 million allocated to financial assistance, the College will increase the pool of grant funds by 8.76 percent over fiscal year 2016 levels.

For the Fiscal Year 2017, salaries will increase on average by three percent by merit for faculty, professional and operational staff, and across the board by three percent percent for classified staff, largely funded by increases in in-state and out-of-state tuition as well as state funding.

The College also appropriated $600,000 in the upcoming fiscal year to the recently released Race and Relations Task Force recommendations: $500,000 will go toward increasing faculty diversity and $100,000 will support the Office of Diversity and Equal Opportunity.

Funding for research grants and contract activity will remain unchanged for the upcoming fiscal year, reflecting the uncertainty of state and federal support for these initiatives.

“In its first four years, the William & Mary Promise has been crucially important to the university’s financial ability to meet critical needs in faculty and staff compensation and in funding vital initiatives,” College President Taylor Reveley said in a press statement.