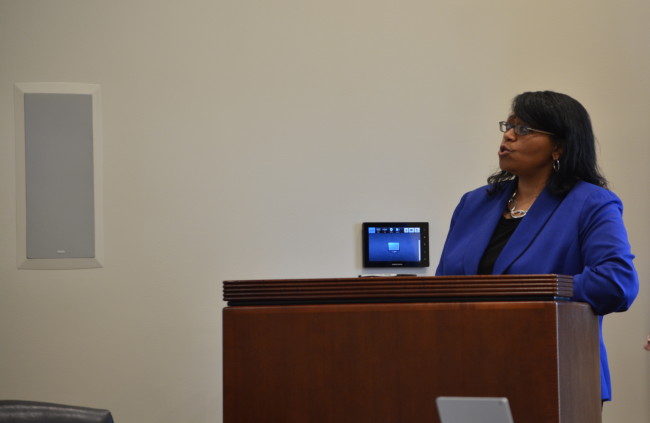 Reveley sent out a campus-wide email Tuesday, April 19 and stated the College of William and Mary’s resolution to pursue the first ten, short-term recommendations to address racial problems at the College from the Task Force on Race and Relations. As the next step, Chief Diversity Officer and Task Force Chair Chon Glover M.Ed. ’99 Ed.D. ’06 presented the Board of Visitors with a summary of the Task Force’s mission and findings.

Although Thursday’s BOV committee meetings covered a range of topics such as neurodiversity and Student Accessibility Services, building resolutions and updates to the faculty handbook, at the start of the full board meeting, Reveley said that the most acute problem the College faces is the experiences of African Americans on campus.

“Think back to an occasion when you weren’t quite sure you were welcome and you didn’t feel included,” Reveley said. “I think just about everyone has had a few of those occasions … When you’re not sure you’re welcome and you really don’t feel included it takes a bite out of your quality of life and you certainly can’t do your best work, and I really believe deeply that those at William and Mary want it to be a campus where everybody does feel welcome, does feel included and can get on with doing their best work … Because of our history of slavery, secession during the Civil War and segregation after the Civil War, the most acute challenge we face concerns race and the experiences of African Americans on this campus. It became clear last year that we really needed a task force to think seriously about racial matters at this campus, what the current situation is and how we can do better in the real world.”

Since March 2015, the Task Force has held six forums for faculty, staff, and both graduate and undergraduate students. The Task Force is made up of four subcommittees: recruitment and retention of diverse faculty and senior administrators, campus climate, education, and prevention and responding to incidents of bias.

Now that the Task Force report has published, Reveley will select individuals to serve on the Implementation Committee, which will set the time frame for carrying out the report’s 51 recommendations.

Glover’s presentation at the BOV meeting focused on the prioritized recommendations — the ten recommendations Reveley determined to be short-term and easy to implement. These include a $1 million campaign to recruit diverse faculty and a resolution to rename the Jamestown Residence Halls after African Americans who were historically important to the College.

Members of the board voted to pass both resolutions during Friday’s full board meeting.

Another of these short-term recommendations involves hiring an external consultant to work with facilities management staff. Related to this, the report also recommends paying facilities management staff a living wage. Concerns related to these staff members arose as the result of staff forums and an employee climate survey that found that African American staff members were more likely to view the College as an unfavorable place to work than white staff.

“We heard that we needed to do more for our staff, and it was really brought to our attention that a large percentage of them are African American,” Glover said. “It was very important for us to recommend that it be an outside person. We didn’t want there to be the perception that it would be someone internal that would cause mistrust. We wanted someone external who could assess the issue and would cause no fear that the person has an agenda to produce a report.”

We heard that we needed to do more for our staff, and it was really brought to our attention that a large percentage of them are African American,” Glover said.

In the fall, the Implementation Committee will be responsible for seeking out proposals from vendors and then choosing a consultant.

Although it was not part of the 10 prioritized recommendations, members of the board addressed the recommendation to establish a mandatory class through the COLL Curriculum that would teach students how to engage in conversations related to diversity.

Former Student Assembly President Yohance Whitaker ’16 referenced a set of similar classes at the University of Richmond that are mandatory for students to take prior to graduation.

“I think students are demanding that this be part of their academic experience to be taught dialogue,” Whitaker said.

I think students are demanding that this be part of their academic experience to be taught dialogue,” Whitaker said.

The report’s recommendations also include a plan to provide training to faculty who do not feel comfortable engaging with students in these conversations.

Another issue not addressed in the report’s recommendations, but brought up by faculty and students at Task Force forums, was the way social media can be misused in ways that make students of color feel unsafe.

One of the events that initially prompted the creation of the Task Force was a series of racially charged posts on the social media app Yik Yak. According to Glover, many students reported incidents where the felt posts on Yik Yak made them feel unsafe or unwelcome at the College. Members of the board, like John Littel, asked Glover how the College should deal with the problems caused by the app.

“How do you counter the sentiments on Yik Yak,” Littel said. “We’ve seen it in fraternity stuff, sexual harassment — when people are trying to communicate a sense of safety that just undoes it.”

According to member of the board Kendrick Ashton Jr. ’98, when universities have tried to block access to the app, students have revolted. At this time, the Task Force has no plans to address Yik Yak, and Glover said there has been no discussion of blocking access or requiring students to pay for access.

Moving forward, the Task Force plans on supporting initiatives such as the Lemon Project’s Memorialization Committee’s goal of funding a memorial to the enslaved at the College.