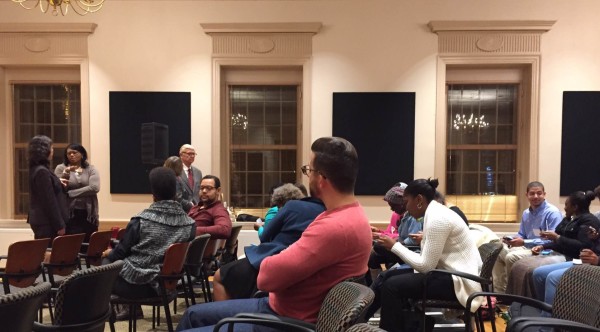 In response to a student report entitled “A Call to Action” and racial incidents in the country, the Task Force was appointed in March 2015 to explore racial climate, recruitment and retention of diverse faculty and senior administration, and training and responding to instances of bias at the College of William and Mary. The Task Force held an undergraduate student forum, a graduate student forum, and a faculty and staff forum. A second undergraduate forum convened to allow more students to attend and give feedback to the administration.

“We really want to hear what you have to say — it’s very important to our work,” Allen said. “Thank you for taking time away from all of the things that you could be doing other than being here to join us.”

Students were broken into small groups to discuss how they perceive the campus climate, what changes they would like to see in the climate and how to implement the changes. The students then were brought back together to summarize their discussions, and the floor was opened up to questions.

Kiersten White ’18 responded to the question posed at the last forum about how it feels to be a student of color at the College. She discussed the current racial climate in communities and universities around the nation, referencing Ferguson, Baltimore, the University of Missouri and the University of Virginia.

“Being a person of color at William and Mary’s campus is exhausting,” White said. “It’s exhausting because we care about more than the average student does. On top of all the stress of academics, extracurricular activities, we stress about the race issues severely affecting our country, our campus and ourselves.”

White went on to discuss the burden on minority faculty members, many of whom serve as mentors for minority students. She talked about the vulnerability she felt because of peers who use racial epithets toward black outside the classroom. Discussing her perception of the administration’s lack of support, White told the Task Force how it felt to have her voice silenced.

“We feel exhausted but most of all, we feel duped,” White said. “Because when applying to this college, we were under the impression that ‘One Tribe, One Family’ was meant for all students and not just the complacent or white ones.”

“I think the challenge comes with administration to sort of recognize that they are a level of authority over students, and so I would then say that the way that the administration can combat that is by showing the students that you care about the students of color, of religious, or sexual and other types of diversity as well,” Whitaker said.

Whitaker discussed that although Jefferson Hall was the residence of the first three black students at the College, there is only a small plaque in the basement commemorating it. In order to create lasting change, Whitaker said the administration must demonstrate that they really care about students of color.

A student addressed a question directly to Reveley about whether hard deadlines would be included in the proposal to ensure policy recommendations are implemented. Reveley asked to clarify the question and then affirmed the administration’s support for the Task Force recommendations.

“Some things are clear,” Reveley said. “We need more minority faculty and one way or another we need to figure out how to do it. I think we desperately need more conversation between people such as those of us who are in the room right now and people who are not in the room, and it’s going to take some real effort on both sides to pull it off. But what I really think the question is shooting at is — is this going to amount to anything? And I am confident it will.”

Additionally, students discussed the need for protection from racism for all students of color, including international students. Others talked about the need for a more central location for the Interfaith Meditation Center, currently held in the Campus Center.

Students and faculty members addressed the lack of white male undergraduates at the forum. They expressed uncertainty about how to bring the issue of race up to the wider College community. Students said that they had trouble even convincing others that racial inequalities existed. Danya AbdelHameid ’18 discussed a recent conversation with a classmate.

“The discussion that we were having was not that this is a reality that people face, it was a debate whether or not the reality was real,” AbdelHameid said. “That’s sort of something I get tired of, is constantly explaining rather than deciding it is a problem and kind of minimizing it and sort of learning how to move forward.”

The Task Force members thanked students for attending the Forum before it concluded.