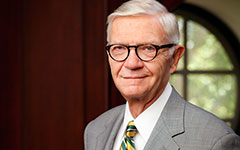 The Task Force on Race and Race Relations met with faculty for a second campus forum Nov. 10 to discuss their views on the current racial climate at the College of William and Mary.

College President Taylor Reveley formed the task force in the spring of 2015, with Chief Diversity Officer Chon Glover M.Ed. ’99, Ed.D ’06, serving as chair. Glover opened the forum by stating the goals of the task force and the reasons for its creation.

“The Task Force was appointed by President Reveley in 2015, March, after we had a number of incidents, racial incidents, that occurred both in society, but also here on campus,” Glover said.  “It really conjured up the discussion of what is the racial climate here on campus? What is working, what is not working? And what are the things that we need to be doing to make sure that we increase the atmosphere so that everyone feels that this is a place where he or she can actually work, study and learn, and it is conducive for that.”

Glover went on to state that over the months following the Task Force’s creation, the team has been studying working practices from other institutions, but will now focus on hearing input from members of the College community. By March 2016, the Task Force plans to submit a list of recommendations to Reveley for improvement across four core focus areas: campus climate, prevention and education, faculty and staff recruitment, and bias reporting and incident protocol.

After Glover’s introduction, Chair of the Subcommittee on Climate and history professor, Jody Allen Ph.D. ’07 led the remainder of the discussion.  The faculty attendees were broken into small groups of about seven to eight people to address how they currently perceive the climate on race and race relations on campus within where they work, changes they would like to see in campus climate, and how to make those changes a reality.

The group discussed diversity within their respective departments. Deconinck said the physics department was somewhat more homogenous in terms of racial diversity when compared with other departments.  He discussed a service provided by the American Physical Society, where a panel of five members of the APS evaluated the diversity climate of the Physics department. Chanson noted that the Faculty Assembly plans to work with a representative from the Task Force to address how to help the task force without duplicating their efforts. In addition to student diversity, a lack of faculty diversity was stressed as a major issue at the College during the forum.

“I just think that the issue of diversifying the faculty across the board is such a huge issue,” Bickham Mendez said.  “I mean, what’s the racial climate on campus? … I don’t know how to talk about that except, from a faculty perspective, except to say that there’s so few faculty of color and it’s, I think it’s terrible, and I think that needs to change.

The group discussed issues that lead to a lack of faculty diversity, including insufficient funding, obstacles with job searches, and the climate of the Williamsburg community.  Group members did point out some positive efforts made at the College, including WMSURE, student support through campus groups and the Office of Diversity and Equal Opportunity, and courses that address these issues. However, the group also noted that the presence of specified funding, increased racial diversity backed by numerical results and increased diversity in leadership roles would show that the school was making progress.

Each group’s note taker then shared with all those gathered the main points of each discussion. The overall messages reiterated across the groups were the need for more faculty diversity and funds set aside for diversity initiatives and inclusion. Other points of concern were that diversity was not addressed within the new College curriculum or within the College’s one billion dollar “For the Bold” campaign.

The floor was then opened up for a large group discussion.  Allen asked faculty members of color about their experiences on this campus.

“Being a faculty member of color is to feel, quite often, isolated,” Task Force member and professor of history and Africana studies Robert Trent Vinson said. “Quite honestly I do feel, and I’ll speak for myself here, that I am one of the many unpaid diversity consultants on campus, and that there is a leadership vacuum, and that we are charged, particularly faculty of color, to fill that vacuum, and that’s resentful, because at the end of the day I don’t feel like I am respected as a black man and that my histories, my culture, people that look like me, whether I’m a faculty member or a staff person cleaning the toilets, that me, people that look like me, are not respected on this campus, and it matters little that I come to work every day wearing a suit and tie, I feel that issues that matter most to me as a black man are not a primary concern from our top leadership, and so at the end of the day that’s disparaging, and disappointing, and disillusioning.”

White faculty members were also asked how they perceived these issues from outside of the black community. Reveley said communication with each other is important to discussing diversity.

“I am certainly aware of the alienation, and the anger, and of the added burden,” Reveley said. “And in my experience we have enormous difficulty actually talking to one another.  People simply, as a rule, don’t feel free to say what they actually think, whether they’re black or white, and if we could ever reach the point in this country that we could talk to each other it would help a lot but as Chon Glover knows one of my main … drums I beat on diversity is, it doesn’t do much good for us just to keep meeting with the converted, and talking to those who already agree, we’ve got to figure out how to meet with everybody, and then actually talk with one another…. So I do think, to the extent you can get it without actually experiencing it yourself, I think a lot of white people get it, including the President and Provost.”

Vinson stated he sees a need for proactive leadership to demonstrate that diversity is one of the key components to the College’s mission. He provided examples of the Dean of Arts and Sciences failing to provide a diversity plan and the For the Bold campaign’s lack of funding for diversity, to explain that he believes intervention from the administration is necessary to send that message.

“The message, over and over again, collectively, is that this issue of diversity, is not core to the mission of the university, and that’s the signal that’s being sent from our leadership on top and that’s the cues that our faculty and various departments will take and so we need, none of this will work, unless our leadership from the top is aggressive and unapologetic and sends that message to the board that this is the direction of this university, come hell or high water, otherwise, we’re just going to be spinning our wheels.”

The Task Force already has campus forums for undergraduate students and graduate and professional students. A staff forum will be held on Nov. 23 at 11 a.m.