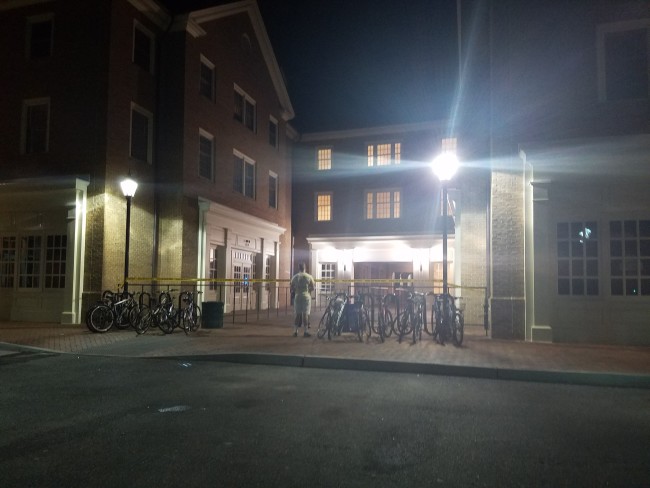 Witnesses reported a late-night argument unraveling into gunshots Saturday morning, leaving one injured. The gunshots were reported outside The Crust, a pizzeria and bar frequented by students on Richmond Road.

According to bar manager Michael Poissant, before the shooting took place, the night was much like any other Friday night.

A local man chose the venue to host his 30th birthday party, Poissant said. Though the venue remained open to the public, the man had requested that the club play reggae music that night.

By midnight, hours into Poissant’s shift, nothing seemed out of the ordinary. If anything was unusual, it was that the night was going better than normal, he said, as people danced and listened to the music.

The patrons were in their 30s, not college students. They were polite, Poissant said. The type who, after they finished a drink, would look for a trash can.

“Everyone was giving each other hugs and loving each other.” — Bar manager Michael Poissant on the atmosphere before the shooting

According to Poissant, The Crust isn’t prone to violent incidents. The worst incidents that had taken place there — tame in comparison to what would unfold later in the night — are marked on its walls: a remodeled bathroom, fixed after students had trashed it at a sorority formal; a repaired wall, repainted after it was punched through by football players (Tribe Athletics had no comment). With students, Poissant said, there is often wear-and-tear on the facility, but seldom violence or drama.

By chance, there was a small police presence at the party that night. A food truck ordered for the birthday party was shut down for serving food without the proper permits, Williamsburg Police Department Major Greg Riley said. Though the police cars left around 12:30 a.m., they were called back less than 20 minutes later.

Riley, who has reviewed The Crust’s security footage from the evening, agreed that nothing looked out of the ordinary before seeing two groups leaving the bar just before shots were reported.

The atmosphere of the club made it unclear how big those groups were, Riley added.

Poissant, who was present during the altercation and who also reviewed the tapes, said that a group including the shooter entered and left The Crust within 10 minutes of the shooting.

They were not associated with the people who were throwing the birthday party, Poissant said.

Both The Crust and the Williamsburg Police Department denied requests from The Flat Hat for a review of the footage from the night of the shooting.

It’s unclear whether the tapes contain footage of the shooting, which occurred just outside the establishment in Tribe Square.

Students reported hearing gunfire as far away as the Bryan Complex.

According to Riley, the shooter fled the scene towards the parking lot behind Tribe Square. In a press release issued Monday morning, the department said they had a suspect, but that he had not been located.

According to the release, the suspect, 22-year-old John Johnson of Newport News, was charged with one count of maiming, two counts of reckless discharge of a firearm, two counts ofshooting into an occupied dwelling and one count of brandishing.

Poissant said when he first heard the gunshots, it was like a nightmare. He thought the mother of his child was in the building, and feared for her safety. Patrons in the building rushed back into The Crust to seek cover. It turned out the man who was shot was Corwin Lindsey, who was working security that night. Lindsey, who goes by “Lord Lindsey,” was shot in the back, Poissant said.

Lindsey was checked into Riverside Regional Hospital in Newport News after the incident. Monday morning he continued to post messages on his Facebook feed documenting his progress. Monday afternoon, visitors to the hospital seeking Lindsey were told that he was no longer on the hospital census.