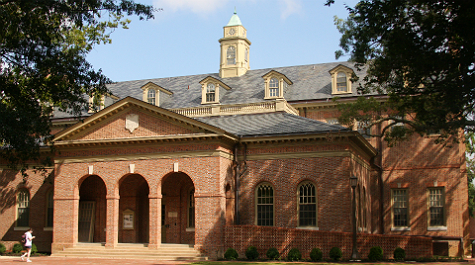 Paula Blank, an English professor at the College of William and Mary who was influential in shaping the study of language, died Sunday, Aug. 21 at her home in Williamsburg. She was 57.

Blank worked at the College since 1992. Her death was confirmed by Provost Michael Halleran Aug. 22 in an email sent to students. No cause was reported.

Blank’s first book, “Shakespeare and the Mismeasure of Man,” was an early example of interdisciplinary research that combined the fields of literature analysis and mathematics.

On campus, Blank is remembered by her friends and colleagues for her creativity and sense of humor. She was a puppeteer and a chef, known for her unique perspectives on both literature and the world around her.

She was funny. She was ironic. She was self-deprecating. And she found life funny,” English Department Chair Suzanne Raitt said.

“She was funny. She was ironic. She was self-deprecating. And she found life funny,” English Department Chair Suzanne Raitt said.

Blank was born in Taenek, N.J. May 4, 1959. After studying for a year at the Universidad de Sevilla in Spain, she attended Wesleyan University, graduating with a degree in Language and Literature in 1981. She received her M.A. in linguistics from Harvard University in 1985 and her Ph.d. in English, also from Harvard, in 1991.

Blank authored a second book, “Broken English: Dialects and the Politics of Language in Renaissance Writings.” She was working on a third at the time of her death.

According to English professor Erin Webster, Blank was influential in her use of quantitative analysis in order to understand works of literature.

Blank’s work showed Webster that there were still opportunities in what had first appeared to be an overcrowded field, Webster said.

In addition to her academic writings, Blank occasionally drew on her research to publish general interest stories in national publications. In 2014, Blank wrote an article for The Atlantic titled “Will Cisgender Survive?”

The same year, in the Washington Post, she turned to Shakespeare’s work to answer the question: Is Frank Underwood on ‘House of Cards’ gay?

Aidan Selmer ’17 said Blank was his role model — and that her influence on him would reveal itself with time.

She had, at all times, an open heart and an open mind, and she offered them to everyone with an open hand,” Selmer said in an email.

“She had, at all times, an open heart and an open mind, and she offered them to everyone with an open hand,” Selmer said in an email.

Outside the classroom, she was known for her art pieces — puppets described as large, comic and grotesque by colleagues — and for her creativity in the kitchen.

During her time at the College, Blank served as the Margaret L. Hamilton Professor of English and was awarded for her contributions to the English language both on campus and elsewhere. In 2010 she received the College’s Plumeri Award for Faculty Excellence. In the English department, she had served as chair of both the personnel and undergraduate program committees.

She also received fellowships from the National Humanities Center, the Folger Shakespeare Library and the American Council of Learned Societies.

“Professor Blank, who had been at William & Mary since 1992, touched many lives on and off campus through her work as a scholar and teacher,” Halleran said in his email to students.

Blank is survived by her parents, her brother, one daughter and her partner.