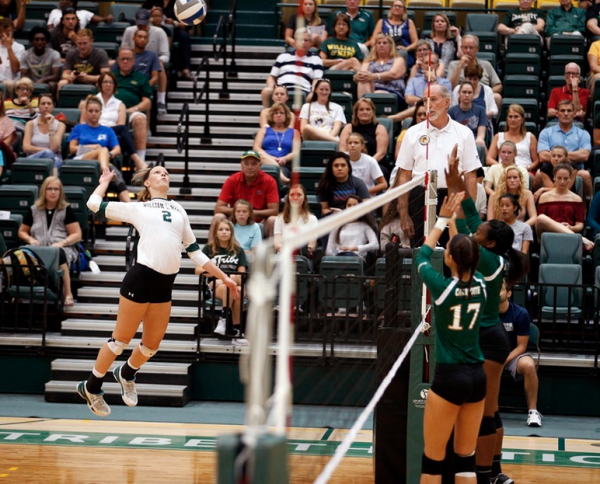 After going 3-0 in the Colonial Classic, William and Mary finished its homestand with a five-set loss to Virginia Commonwealth during the week before going 2-1 in the Gamecock Invitational in Columbia, S.C. over the weekend to complete the 2016 non-conference slate.

Splitting the last four games 2-2, the Tribe (6-7) has started an upswing from its downhill momentum last weekend after starting the season 1-5. Two of the four matches went to a full five sets, showing the College can go the distance when needed.

Tuesday’s matchup against VCU (8-6) began strongly as the College started with a 2-0 lead, the first two sets won by margins of 25-19 and 26-24. As the score of the second set indicates, the Rams began catching up, which led to a 25-21 third set loss for the Tribe. At 2-1, the College had its worst set of the match, falling 25-13 as VCU forced a tiebreaker. In the fifth set, both teams traded solid rallies, but the Tribe fell by four points 15-11 to hand VCU the win.

Freshman outside-hitter Casey Foote led with 13 kills in the match, while freshman setter Autumn Brenner led in assists with 46 and junior defender Sara Zumbach had a team-high 34 digs.

To open the weekend, the Tribe swept Gardner-Webb 3-0 late on Friday. The dominant performance was never close, as the College won each set by an average of 12 points per set. The Bulldogs (8-5) fell 25-17, 25-12 and 25-10 to give the Tribe its fifth win of the season. Junior outside-hitter Sydney Biniak led the offense with 11 kills, while Brenner tallied another 33 assists and Zumbach added 13 digs.

Following the sweep was the lone loss of the weekend as the College took on host South Carolina, who would enter and leave Saturday undefeated. The Tribe narrowly avoided being swept by taking the third set 25-21, though the game ended in the fourth set as the Gamecocks (12-0) won a nail-biter 25-23 to win the match 3-1. Foote led with 16 kills, Brenner had a huge night with 42 assists, and Zumbach led the backs with 16 digs.

The Tribe saved its most exciting match for last, rolling over Davidson 3-2 in a comeback victory. After falling 25-23 in both the first and second set, the Tribe edged the Wildcats (4-9) in set three 25-22 to turn the tide. A battle in set four equalized the match 2-2 as the College won 26-24. In the deciding fifth set, the tiebreaker went to a tiebreaker of its own as the Tribe went to extra points and came out on top 16-14. Foote continued her strong offensive weekend with 20 kills, closely followed by Biniak with 19.

Brenner was on fire in the setter position, achieving a career-high 64 assists, giving her 139 assists for the tournament and earning her Colonial Athletic Association Offensive Player of the Week honors.

Brenner was on fire in the setter position, achieving a career-high 64 assists, giving her 139 assists for the tournament and earning her Colonial Athletic Association Offensive Player of the Week honors.

The Gamecock Invitational marks the final regular season tournament of the 2016 campaign, which means the Tribe now heads into conference play. The CAA slate begins Wednesday at James Madison with first serve scheduled for 7 p.m.