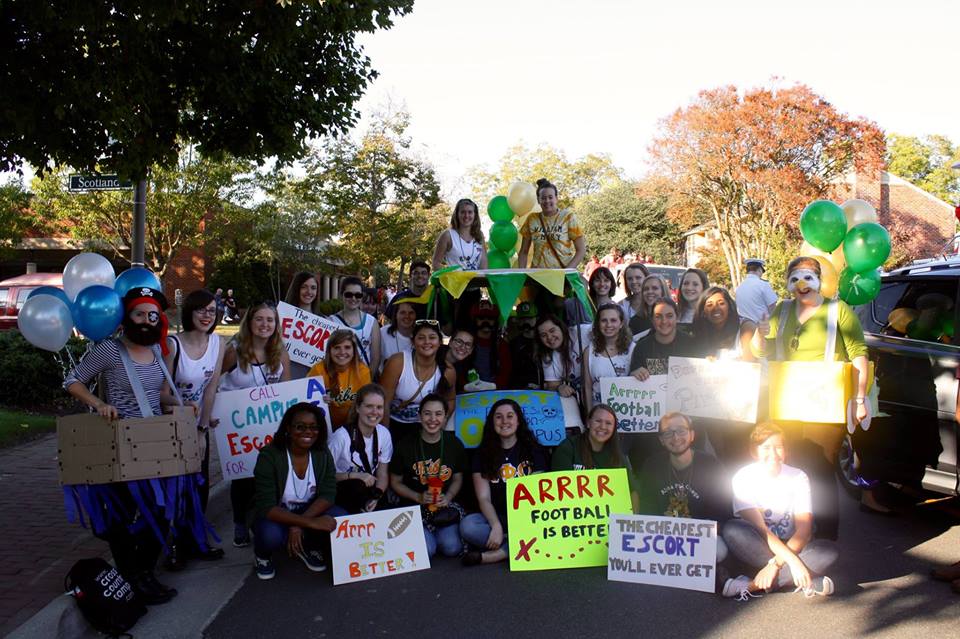 There are no quiet nights for Alpha Phi Omega’s Campus Escort program. This semester has seen a significant increase in the number of people using their golf cart service, which allows students to get rides around campus at night for free.

Campus Escort is the main service program run by APO, the College of William and Mary’s service fraternity. They operate from 9:00 p.m. to 1:00 a.m. on weeknights and from 9:00 p.m. to 2:00 a.m. on weekends. Brothers are responsible for completing twelve hours of Campus Escort service each semester, during which they log calls and drive students to and fro across campus.

“We share the SA house, and we go in at 9:00,” Service Vice President of APO Rose Richardson ’17 said. “There [are] at least three brothers — usually there’s more but three is our minimum, and we wait and hang out in the house. Once we get a call, one person stays at home, and we have a log on our Facebook page, and we log all the info on it, and then, two brothers go out on the cart.”

Those two brothers bring a walkie-talkie with them on their rides, radioing back to the house when they pick up their passenger and again when they deliver them to their destination. Because the golf cart runs on a rechargeable battery, it has been known to run out of power fairly often. APO Service Coordinator Emily Lynch ’18 said there was one time when superhuman strength was needed to rescue the powerless golf cart.

“We drove the Escort car to the activities fair, to advertise for APO, and something went wrong with the cart while we had it parked outside, and it pretty much died immediately,” Lynch said. “I was the one driving it back from William and Mary Hall to the Escort house, which is on Jamestown Road near Griffin, so very far away from William and Mary Hall … So me and a couple of other people that were also there, a couple of brothers, started to push it. It was going to be a long way. We were calling other brothers to come help us.”

Luckily, some members of the College’s Nerf Club were there to help.

“[Nerf Club] helped us push the cart all the way back, for probably 15 or 20 minutes, just pushing this dead cart back,” Lynch said. “And it was so amazing. It reminded me of how great William and Mary students are.”

That was not the only memorable time the cart broke down far away from the Escort house. Kaitlin Opie ’18, a brother and Campus Escort manager, said her most memorable Escort run was after picking up a group of girls from a sorority formal and bringing them to the Ludwell Apartments.

“We could feel the cart dying the whole way there,” Opie said. “But we really wanted to deliver them all the way. So we got them to their door, and then, the cart died right there. It was quite an adventure pushing it back to the Escort house, but we were proud we made it all the way.”

The Campus Escort program has been around for several years, and its popularity continues to grow. So far this semester, APO has given almost fifty more rides than they did by this time last semester. According to Pledging Administrator Dana Baraki ’18, this increase in traffic could be due to either changes in advertising or to heightened safety concerns.

“My speculations would be that, one, we advertised a lot this year,” Baraki said. “We advertised all through Orientation about Campus Escort. We have a sign in Swem, so a lot of people see that on their way out. Also, I think the shooting at the Crust had something to do with it. That was unusual for our campus, and I think that really shook people up.”

Many students who use the service are coming from studying at Earl Gregg Swem Library or exercising at the Rec and want to avoid walking through the woods alone at night. Sometimes students are injured and use Campus Escort on a regular basis to get around campus through their recovery. One Tribe Place and the Ludwell Apartments are also popular destinations for Campus Escort passengers.

“You get some people who you end up driving a lot,” Richardson said. “That’s always interesting because then you get to know them.”

Whether a student is a repeat customer or has never called before, Richardson said Campus Escort is eager to help.