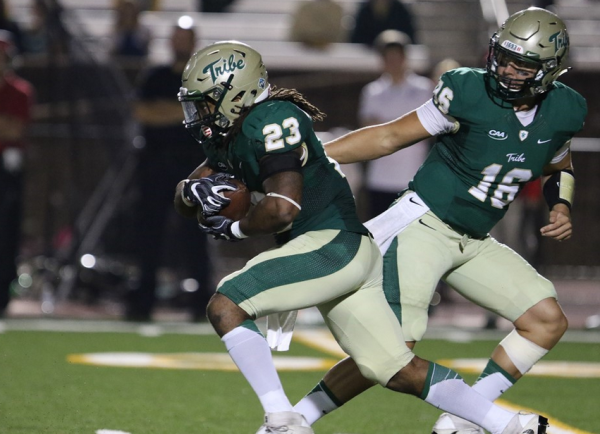 After its weekend trip to Durham, N.H., No. 19/17 William and Mary came back empty-handed, suffering its second Colonial Athletic Association loss of the season as it fell to New Hampshire 21-12 Saturday afternoon.

Amidst turnovers and an otherwise unproductive offense, the Tribe (2-3, 0-2 CAA) dropped to a losing record overall and remains winless in conference play as the unranked Wildcats (3-2, 2-0 CAA) overcame a slow start to quell the College’s chances of victory.

“Obviously we’re not pleased with their performance,” head coach Jimmye Laycock ’70 said to Tribe Athletics. “Made a lot of mistakes and then again we had some opportunities to capitalize on, some especially early and we weren’t able to do it, so very disappointing.”

The matchup began with a long, turnover-ridden first quarter for both teams. The College began with a three-and-out opening drive, redshirt freshman placekicker Kris Hooper — standing in for senior punter Hunter Windmuller and junior kicker Nick Dorka, who were both inactive Saturday — punting just 17 yards to give the Wildcats possession in Tribe territory. The New Hampshire drive wouldn’t last long as the first turnover occurred on 2nd and 5 when junior defensive tackle Isaiah Stephens stripped the ball carrier to force a fumble, which was recovered and returned 38 yards to the Wildcat 15-yard line by freshman safety Corey Parker.

Obviously we’re not pleased with their performance,” head coach Jimmye Laycock ’70 said to Tribe Athletics. “Made a lot of mistakes and then again we had some opportunities to capitalize on, some especially early and we weren’t able to do it, so very disappointing.”

The fumble recovery, though impressive, would ultimately not lead to any scoring as UNH held strong on its own goal line to force a Tribe field goal attempt. From just 32 yards out, Hooper’s kick flew wide left for no points. The College’s defense let the Wildcats through for several small rushes on the subsequent drive, but before the home squad crossed midfield, UNH quarterback Trevor Knight threw his only interception of the game, a pass that was picked off by senior cornerback Trey Reed, who returned the pick 16 yards to the Wildcat 39-yard line.

After that long series of back-and-forth possessions, the Tribe made its mark on the scoreboard first as senior running back Kendell Anderson found holes in the defense for a 36-yard dash to the end zone down the right side of the field. Hooper’s PAT kick missed, putting the score at 6-0 with six minutes, 40 seconds remaining in the quarter.

Following the touchdown, the College’s defense kept the momentum as Parker had another fumble recovery on the subsequent drive after junior cornerback Aaron Swinton forced a fumble. However, senior quarterback Steve Cluley, following his alarming trend since the end of last season, threw an interception to UNH cornerback Casey DeAndrade, who, in last year’s game at Zable Stadium, had a 90-yard punt return for a touchdown. Fortunately for the Tribe, DeAndrade couldn’t return due to the way he caught the ball, but the interception shifted the momentum strongly away from the College. The first quarter ended after an exchange of punts gave New Hampshire the ball again.

In the second quarter, the Tribe had a long, clock-burning drive midway through, though it again resulted in no points on the board. Cluley and the offense made it into UNH territory after starting from their own 23-yard line, though the Wildcats would stuff the run and break up pass attempts downfield to end the drive with a turnover on downs after a failed 4th and 4 play.

New Hampshire took a lead on the next drive as Knight used his dual-threat nature and rushed four times to push the ball down the field, with the fourth rush scoring a touchdown with a 28-yard routing of the Tribe defense. With the PAT good, the Wildcats held a 7-6 lead they would never relinquish. The score remained the same entering the break.

Back from the locker room, the game slowed down considerably as the third quarter only had three total drives compared to the first quarter’s 10 drives. The Tribe defense allowed UNH to move the chains on third down twice in the first drive of the half, though it made up for its faults with a quarterback hurry by Stephens on third down that forced an incomplete pass and ultimately a punt.

Following the stop, the impact of injured players was apparent. Anderson started the drive with a strong 30-yard gain to the 50-yard line, but following that rush were small, single-number gains that took lots of energy and momentum from the offense. The absence of redshirt freshman Albert Funderburke — out with an ACL tear — clearly showed Saturday, as the Tribe desperately needed the tailback depth on which it usually relies. After failing a third-down conversion, the Tribe opted for a field goal attempt from 35 yards out. With Dorka out, Hooper once again failed to convert, as the kick sailed wide left.

New Hampshire took over at its 22-yard line and began a nearly seven-minute drive that stretched into the fourth quarter. The slow pace worked for the Wildcats, who scored via a 1-yard rush from running back Dalton Crossan. After a successful PAT, the score was 14-6.

Struggling to find a rhythm, Cluley threw an interception — his second of the game and ninth of 2016 — on the very first play of the following drive, giving UNH possession at the Tribe 23-yard line even without a pick return.

“We had a guy running wide open down the middle and we underthrew him,” Laycock said to Tribe Athletics. “Kind of the way the game was. That one might have gone all the way, I mean he was wide open, but anyway, that’s one of those things.”

Knight combined quarterback rushes as well as completed passes to score again within three minutes, the score now 21-6 with 10 minutes remaining. After that score, the College managed to find the end zone again for Cluley’s fifth passing touchdown of the year, a 9-yard pass to junior wideout Daniel Kuzjak on 4th and goal. Down 21-12, the Tribe attempted a two-point conversion, but it failed. The final 6:28 left on the clock were bled off by New Hampshire to seal its upset over the College a year removed from the Tribe’s upset win over the Wildcats in Williamsburg.

The two interceptions and two missed field goals catch the eye first on the stat sheet, but the College’s passing and rushing stats are equally worrying. UNH managed 118 passing yards to the Tribe’s 61, doubling the efforts of the visiting team. In the ground game, where both teams usually put forth strong numbers, the College had 174 yards, which doesn’t look too bad until seeing that New Hampshire had 252 yards rushing, a difference of 78 yards. Cluley went 8 for 20 with the two picks and was sacked three times to boot. Anderson led the rush with 168 yards and a touchdown on 25 carries. Defensively, Parker shined with the two fumble recoveries while Reed had the pick, and redshirt freshman linebacker Nate Atkins led with 11 tackles.

As a result of the loss, the Tribe fell out of the top 25 in the STATS poll and coaches’ poll. The College continues what is likely its hardest road stretch of the season next week in Harrisonburg, Va., where it will play No. 7/6 James Madison (4-1, 2-0 CAA) this Saturday. Kickoff is scheduled for 3:30 p.m.