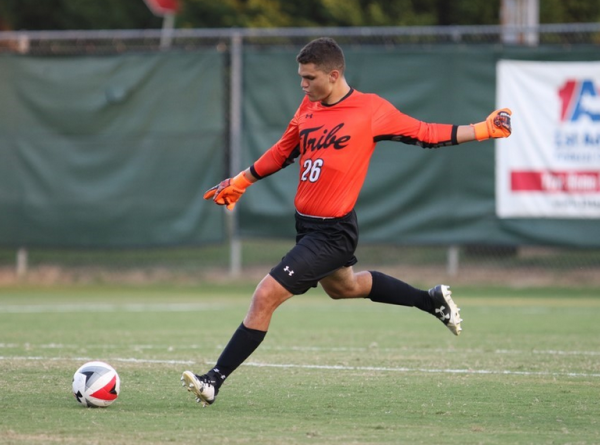 With 80 minutes in the books, William and Mary looked set to continue its midweek battle with James Madison into overtime. While a downpour that began 10 minutes prior raged on, lightning struck nearby to bring the match to a delay and eventual early finish, giving the Tribe a 0-0 tie in its Colonial Athletic Association home opener Wednesday at Martin Family Stadium.

“I thought that we had some momentum building and we were creating chances and it felt like we might get a goal there, so from that standpoint it’s obviously disappointing not to finish the game,” head coach Chris Norris said. “At the same time we have a lot of games left to play and we have to make sure we take the positives away from this and get ourselves ready for Northeastern.”

I thought that we had some momentum building and we were creating chances and it felt like we might get a goal there, so from that standpoint it’s obviously disappointing not to finish the game,” head coach Chris Norris said.

The College offense started the match slowly  as they consistently turned the ball over in the attacking third, still clearly searching for rhythm. Several close opportunities passed by for the Tribe as Dukes goalkeeper Kyle Morton had three saves in the first half. Both sophomore midfielder Antonio Bustamante and junior forward William Eskay had near misses that could have earned the Tribe victory. In the eighth minute, Bustamante fired a header to the center of the net, but Morton deflected it. Bustamante fed the ball to Eskay in the 28th minute for another attempt with almost no defenders nearby; however, Eskay took a bit too long to get his shot off, allowing five or so JMU players into the box to block it. One other strong chance was fired in the 33rd minute off the foot of Eskay — who took four total shots, two on goal — as he surged past the backline with the ball and shot, only to be caught by Morton for the save.

“First half was a little hard for us to break them down,” Norris said. “I thought we were not very sharp in the attacking half. We had a lot of possession but it was mostly possession at midfield. Once we started to try to penetrate to create a chance, it broke down pretty quickly.”

At the break, the Dukes and the Tribe each had seven shots after JMU pressured redshirt-junior goalkeeper Phil Breno in the later part of the half, including a quick succession of three corner kicks. The Tribe would make up the deficit with 10 shot attempts in the 30 minutes that made up the second half before the game was called. Additionally, Breno and the rest of the defense stayed stalwart, preventing any shot attempts for the first 15 minutes of the half. Just as the rain began around the 70th minute, sophomore midfielder Marcel Berry appeared to score a goal, but it was called offside and the game remained scoreless. The game was soon called just as JMU was setting up for a free kick that resulted from a yellow card given to freshman defender Tanner Shane, resulting in the 0-0 draw.

Second half was much better, the game was more open, we did a much better job in attacking situations,” Norris said. “The big problem tonight is we didn’t do well with our finishing.”

“Second half was much better, the game was more open, we did a much better job in attacking situations,” Norris said. “The big problem tonight is we didn’t do well with our finishing.”

Through what was played of the back half, the College looked primed to score but was steadily stopped by the Dukes’ defense. While on defense themselves, the Tribe dispatched what has been a weaker-than-usual JMU offense. On the stat sheet the game looked in the College’s favor with 15 shots, five of which were on frame compared to the Dukes’ 10 shots and four on goal. Breno ended the match with four saves while he and the backline successfully defended five corner kick attempts.  Norris commented on the defensive strengths and weaknesses he saw during the match.

“I think JMU has struggled a little bit to score some goals this year, but I thought overall we defended pretty well,” he said. “We had a few situations where maybe we didn’t communicate quickly enough and solve problems, and that led to some opportunities for them to serve balls into the box.”

Offensively, Eskay and sophomore forward Ryder Bell led with four shots apiece while six other players were able to fire at least one shot. Bustamante, Bell, Shane and Eskay all registered shots-on-goal, though the five attempts turned into five saves for Morton.

Through three games, the CAA looks formidable and evenly matched. The Tribe looks to get back into form and secure its first conference victory with another home match this Saturday when it hosts Northeastern. Kickoff for the match is set for 7 p.m