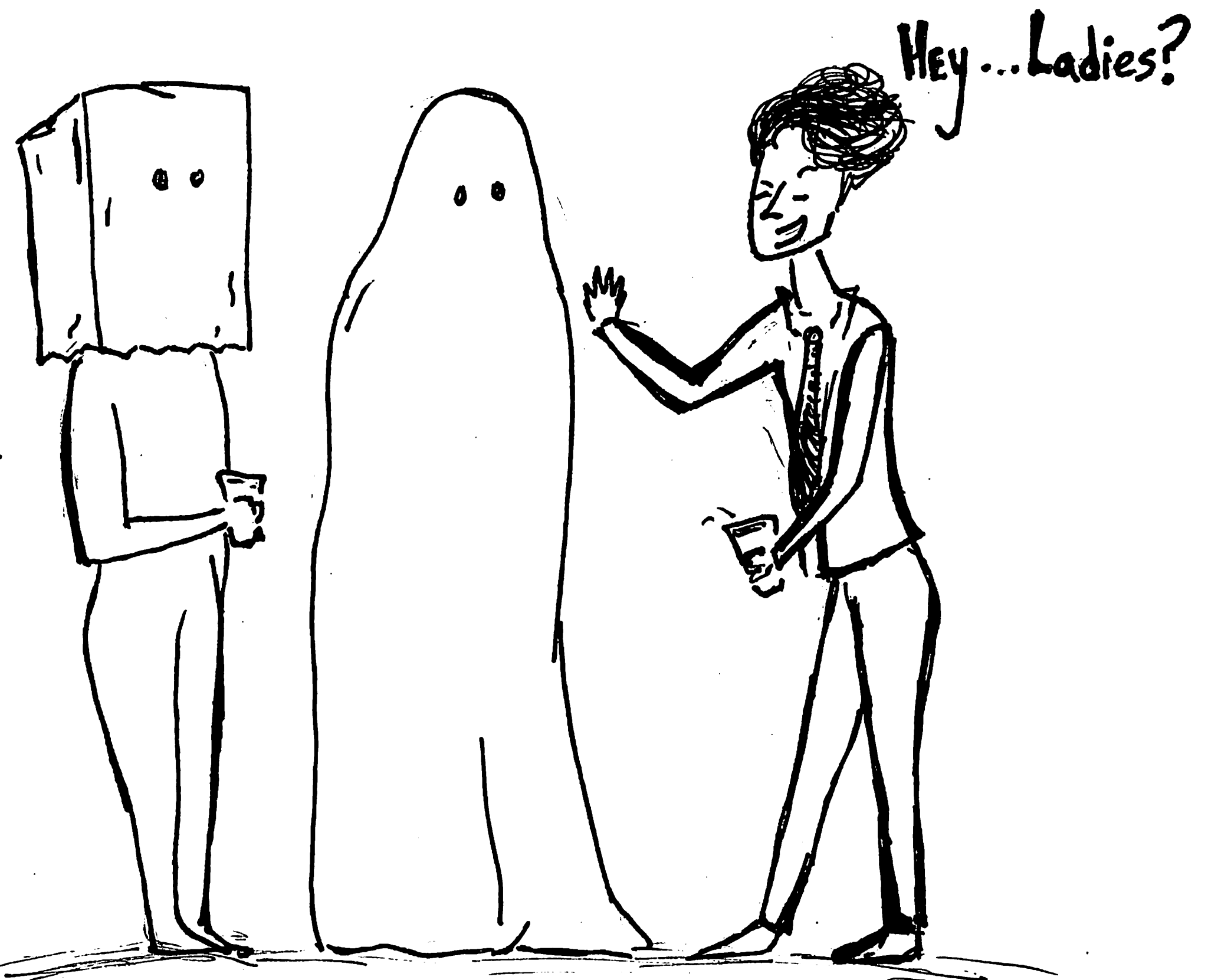 I have to apologize that this column is of a disappointingly lower quality than my last one, but my male ghostwriter quit so it was up to my inferior woman brain to write this one. And I’ve decided it’s time to address a very important seasonal conflict. No, it’s not the debate over how undervalued the apple is now that pumpkin has monopolized the market for artificial flavoring. The issue: Choosing the right Halloween costume. This cuts deeper than basic-ness taking over our supermarkets because it is paramount to surviving the paranormal festivities. However, it’s not the ghouls one has to brace themselves against; it’s the time-honored, alcohol-fueled sexual aggression of this otherwise exceptional holiday. Selecting a costume that dissuades unsolicited attention is particularly difficult because one has to balance the desire for fun with the seemingly reasonable request to not be groped by a “sexy” Trump imposter.

The most popular apparel choices are sexualized professions and characters. The capitalist beneficiaries of Halloween have managed to transform every profession known to mankind into something sexy. Amongst their most imaginative feats include sexy food-service, sexy non-profit managers and sexy sanitation workers. There are also “hot” versions of any identity one could assume, no matter how offensive (e. g. Native Americans) or absurd (e. g. sexy Republican senator). Similar to TLC shows about parents forcing their children to fulfill their own unsatisfied dreams of stardom, these costumes are guilty pleasures that are trashy but far too fun to abstain from completely. Sadly though, I don’t have to go into any detail as to why a costume that has even the faintest whiff of innuendo or suggestion will open you to an onslaught of unwanted attention, if not worse. So we can just eliminate three-fourths of the selection off the bat.

The next option is the clever costume. This initially seems like a safe bet. It’s easy to become the physical manifestation of a pun without showing any skin. Unfortunately, going as a critique of global capitalism or the overused 404 error message will show that you put thought into it, which means you were trying to have an enjoyable holiday. And we all know wanting to enjoy yourself clearly means you want to be catcalled or have your personal space violated. Logic. Perhaps it is possible to fight creepy with creepy. Seems feasible; after all, most people aren’t about to talk to the girl making “Grudge” gurgles in the corner. Sadly, you will run into the same problem choosing the creepy or the clever costume unless you are actually possessed by a demon, and even then, that girl from “The Exorcist” was pretty hot once you got past all the vomit.

With all of the traditional options eliminated, it’s time to get creative. You could go as an animal. I don’t mean a costume crafted from a little face paint or fuzzy ears; I mean a full-body mascot suit. Maybe go as the Griffin, or take the butt end of a horse costume. In theory, this is the perfect solution. No one can see your face or body, and no one knows who or what is in the endangered Chinese Giant Salamander costume (besides someone who deeply cares about the impending doom of a very important species). Unfortunately, a full-body costume is often seen as a piñata filled with a mystery sex prize in the mind of some more perverted folks. You could just not dress up. Nothing deadens the mood more than someone who clearly did not try for the best holiday of the year. In theory, this should raise your odds of random degradation down to their normal levels. In practice, you’re likely to be mistaken as ironic or a sitcom character, which exposes you to the same vulnerabilities as a clever costume. That leaves wearing a paper bag over your head or just going as a classic bedsheet ghost. Unfortunately, a paper bag can have some pretty lurid angles, and sheets invoke the thought of beds, so both wrinkled costumes and the anonymity that come with them can still arouse unwanted attention.

So, what is left? I guess we can just all stay home until rape culture ends and eat candy with our friends. After all, no one can control the inappropriate actions of others with clothing. Happy Halloween.

Emily Gardner is a Confusion Corner columnist who on Halloween night will be passing out candy from her dorm room.