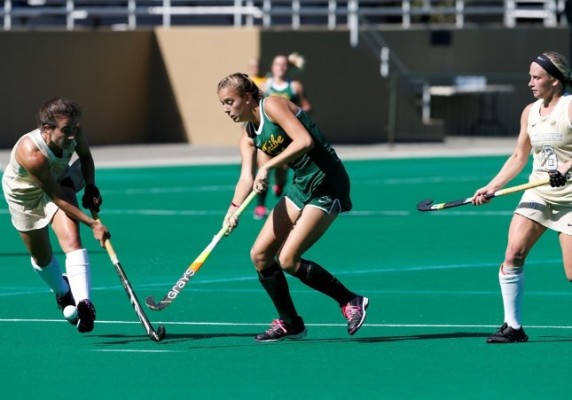 With a 2-1 win in a Colonial Athletic Association matchup against Drexel (6-8, 1-2 CAA) Friday night at Busch Field, William and Mary (6-8, 3-1 CAA) brought itself within reach of a CAA playoff spot. Sunday afternoon, the Tribe then faced a tough matchup against No. 17 Wake Forest (7-6, 0-5 ACC) at Busch Field for its Senior Day and its final home game, eventually losing 3-1.

In Friday’s game, the Tribe had to battle from behind early after a Drexel goal in the 8th minute. In the 27th minute, junior midfielder Emma MacLeod responded by tipping a shot into the goal off of a cross from junior midfielder Estelle Hughes.

“For Drexel, it was a must-win game, so they came out and changed the pattern that they were playing, and this wasn’t the Drexel we were expecting,” head coach Tess Ellis said. “So for us to go 1-0 down and come back certainly is a good experience for us for tournament play and the rest of the season.”

After a timeout was called in the 55th minute, MacLeod scored again off of a pass from junior forward Cammie Lloyd, putting the Tribe up 2-1. The Tribe then attacked Drexel’s defense even more, giving the Dragons no time to make a comeback for the rest of the game.

For us to go 1-0 down and come back certainly is a good experience for us for tournament play and the rest of the season,” said head coach Tess Ellis.

Delaware goalkeeper Erin Gilchrist made 10 saves, while freshman goalkeeper Morgan Connor made three saves, with an additional defensive save by redshirt senior defender Maddy Moore. The Tribe outshot the Dragons 22 to 10, with five coming from MacLeod and six coming from Lloyd.

“22 shots is nice, but with 22 shots we should probably be scoring four goals, which is credit to Delaware’s goalkeeper. She pulled off some big saves for them, which kept them in the game,” Ellis said.

In Sunday’s game, the Tribe forced the Demon Deacons to work for their win with tight defense. In the first period alone, Wake Forest outshot the Tribe 10-3 and had four penalty corners, but the Tribe’s defense kept the team in the game. Connor had eight key saves, and junior midfielder Erin Menges also added two defensive saves.

Between unrelenting first-period Wake Forest attacks, the Tribe struck first in the 24th minute when freshman forward Woodard Hooper stole the ball at midfield and drove straight into the box for her first career goal. However, the Demon Deacons tied the game with a 28th minute goal. After the second period, the Tribe was able to generate more opportunities on offense, even when down one goal in the 47th minute, but eventually a Demon Deacon goal in the 64th minute sealed the game.

From a senior’s perspective, I think our team is really close this year, and it shows on the field,” senior forward Maria Jose Pastor said. “We’ve been playing really well with each other, and we’ve been improving.”

While they did not get the most desirable result on Senior Day, the team was not discouraged by the loss, but motivated.

“From a senior’s perspective, I think our team is really close this year, and it shows on the field,” senior forward Maria Jose Pastor said. “We’ve been playing really well with each other, and we’ve been improving.”

“I think that playing with these teams that are super skilled and fast is a really good thing so that we can be prepared for JMU,” Menges said. “That’s going to be a very aggressive game, so you can only take positives away from these games.”

The Tribe’s final four games will all be on the road, with the next game being a CAA matchup at James Madison (11-3, 3-1 CAA) on Friday at 6 p.m. The winner of Friday’s game will clinch a spot in the CAA playoffs.