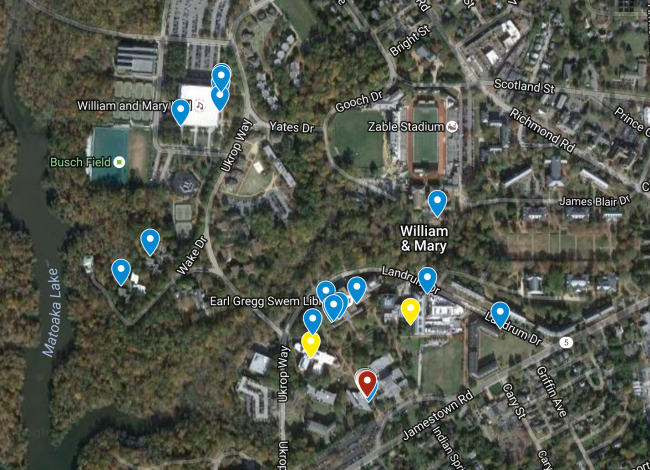 Nick Newberry ’17 was a freshman living in the Green and Gold Village when he first saw a dead bird on the ground by Kaplan Hall. He has seen multiple bird deaths caused by glass windows in many different ways around campus since that day, and he described the experience of finding dead birds as “jarring, every single time.”

Newberry has been collecting data on bird deaths since his freshman year.

“We estimate between 500 and 2,000 birds per year die from hitting windows, and it could be much higher than that,” Newberry said.

Newberry and others associated with the Bird Club, which Newberry founded the spring of his freshman year, have been trying to obtain Green Fees.

These funds, designated by the College of William and Mary for sustainability purposes, would finance the installation of special films on windows around campus to curb window-related bird mortality.

These sometimes-fatal window collisions, caused by reflections that give birds the impression of safe passage, could be prevented by the window treatments.

The birds are typically harmed around what Newberry called “hot-spots” on campus, such as certain windows at the Earl Gregg Swem Library, the Muscarelle Museum of Art, Small Hall and Kaplan. Despite the issue being generally confined to the fall and spring due to migration patterns, Newberry noted that there is an anomaly to that trend here on campus.

“There’s a window at Muscarelle that kills birds year-round,” he said. “Between 75 and 150 birds per year at minimum die from trying to go through that passageway.”

To collect this kind of data, Newberry, Bird Club President Megan Massa ’18, Ohad Paris ’17, a graduate student studying biology, and others check throughout the week for dead birds near these particular hot-spots.

“I find [dead birds] all the time,” Massa said. “It’s very unfortunate that some of the rare birds or the birds that would be really interesting to see here don’t make it out of here.”

Once, Newberry found a Painted Bunting dead by Small Hall, a kind of bird that he had never seen before. It was only the 15th time one had been sighted on the peninsula, he said.

Newberry, other Bird Club members and faculty had had enough experiences finding dead birds around campus to keep the issue dormant in data sets.

“I felt like I was part of that cycle where you do all the research and you know what’s wrong, you know how to fix it, but you just don’t advocate for it, and so I didn’t want to fall into that trap,” Newberry said.

The club was granted a Green Fee during the spring semester of 2016.

“The Green Fee we were awarded … was for an experimental trial phase of the project, so they wanted to see beyond a shadow of a doubt if this treatment actually affects birds in a way that makes it so they don’t hit windows,” Newberry said.

This trial phase involved a treatment of a window at Swem. Paris said that these changes have already lowered the number of bird collisions.

But the process has not been simple, and windows continue to kill birds each week.

“Cats and habitat destruction kill more birds than windows, by far, but these injured populations need to be protected from any preventable mortality,” biology professor and Bird Club faculty advisor Daniel Cristol said in an email. “We are not getting rid of cats anytime soon, and habitat destruction will always be increasing as human populations grow, so stopping the slaughter at the windows is a very feasible way to help these disappearing birds.”

Paris said that there was another untreated window at Swem that recently killed a bird. He said he knew which window had hurt the bird because he could see a stain from where it had crashed, a kind of “watermark” sometimes left when their feathers hit the glass.

“These are young birds, they were born just a few months ago,” Paris said. “That’s one of the reasons they hit windows — they don’t understand buildings yet.”

As the issue persists, Newberry and Paris push for more Green Fees and recognition of the problem around campus.

Newberry said the club had difficulty communicating the importance they perceived in resolving the issue.

“Another issue for this problem is that people don’t know about it on campus, and that’s just as much an issue as the birds dying themselves,” Newberry said.

This observation provoked Newberry to create a Facebook page titled: “For the Birds: A Campaign to Save 10,000 Birds at William & Mary,” which he described as a spinoff of the College’s campaign called “For the Bold: A Campaign to Raise a Billion Dollars Over 10 Years.”

As fatal window collisions persist, these students and faculty continue pushing for current treatments but look towards future campus construction as well.

“We’re trying to treat building by building right now, but eventually we want it to be in the policy of the College going forward to every single new building that’s built, it’s built with birds in mind,” Newberry said.

Newberry recalled an experience in which he found two dead Red-eyed Vireos at Swem. He said this instance particularly motivated him to address the problem.

“One of them had been stepped on and sort of brushed to the side … that just kind of sent me over the edge,” Newberry said. “I was just like … I have to do something about this.”