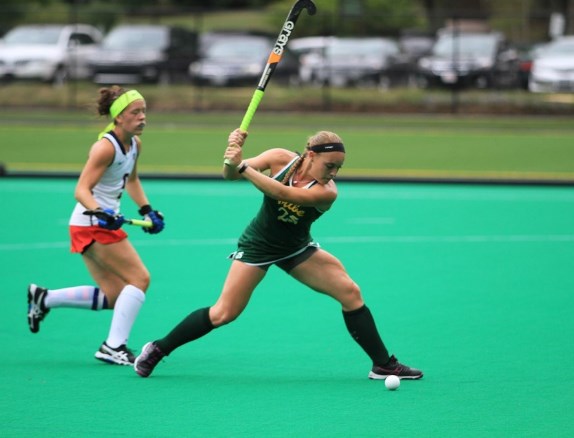 William and Mary seized its opportunity to clinch a Colonial Athletic Association playoff spot this past weekend as the Tribe traveled to Harrisonburg, Va. Friday, upsetting No. 17 James Madison 4-3 in an overtime thriller.

The win officially gives the Tribe (8-8, 4-1 CAA) a place in the CAA semifinals, and by the present standings, the No. 2 seed for the tournament. The Tribe travelled to Richmond Sunday, where they won a tight non-conference game 5-4 against Virginia Commonwealth.

In Friday’s game, the Dukes (11-5, 3-2 CAA) started the game off on the offensive when JMU midfielder Hannah Hall and forward Melissa Wilken both scored a goal within the first 20 minutes for an early 2-0 lead. Junior midfielder Estelle Hughes scored off of a rebounded shot in the 30th minute to keep the Tribe in the game at the end of the first period.

With the Tribe down 2-1 after halftime, junior midfielder Emma Macleod scored on a penalty corner less than one minute into the second period, before scoring again one minute later when she blasted a shot into the far left side of the goal, putting the College up 3-2. The Dukes tied the game in the 42nd minute, after which the Tribe played hard defense for the rest of regulation time.

The College caught a break in the 47th minute when JMU forward Miranda Rigg’s shot on goal bounced off the post. Freshman goalkeeper Morgan Connor went 3 for 4 in saves after the 50th minute and the Tribe’s defense additionally blocked two additional shots to force overtime after the regulation 70 minutes. During the extra period, junior forward Cammie Lloyd quickly scored the game-winning goal in the 72nd minute.

In Sunday’s game, the College was forced to play another high offense game against VCU, who scored the first goal of the game in the second minute. After Lloyd tied the game in the 10th minute, VCU (5-11, 1-6 A10) scored two more goals by the 28th minute. Before the first period ended, MacLeod and senior midfielder Mary Flick scored two goals to tie the game 3-3 at the half.

In the 41st minute, the Rams went back into the lead with a shot by VCU forward Lauren Kaup that rebounded off the post and into the goal. The Tribe again equalized in the 46th minute with a goal by freshman midfielder Cassidy Goodwin. Just like in the JMU game, the Tribe’s defense had to fight against VCU’s offense late in the second half. The College was spared giving VCU the lead again in the 55th minute when VCU forward Emily McNamara’s shot on goal was deflected by Connor and rebounded just off the post. Eventually, MacLeod would score the go-ahead goal in the 61st minute to complete the come-from-behind win.

The Tribe outshot the Rams 18-8 and had 11 penalty corners to the Ram’s six. VCU goalkeeper Chessa Kownurko made seven saves, while Connor made two. In the Tribe’s past five games, MacLeod has scored seven of the Tribe’s 14 goals.

This upcoming weekend, the College will play its final two games of the regular season, traveling to Fairfield Friday before the final pre-tournament CAA match at Hofstra (9-8, 1-3 CAA) in Hempstead, N.Y. Sunday. The Tribe can clinch the No. 2 seed in the CAA playoffs with either a win against Hofstra or a JMU loss against Hofstra Friday.