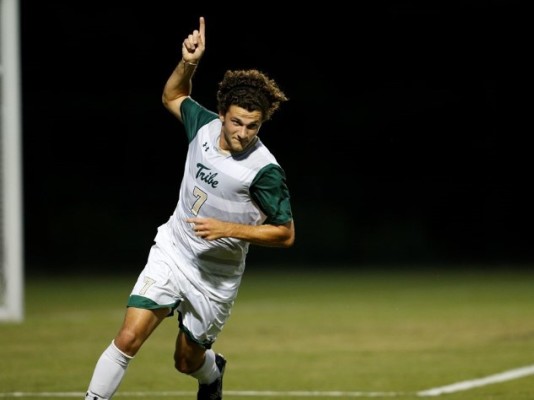 William and Mary (8-6-2, 2-3-2 CAA) made another important step toward squeaking into the Colonial Athletic Association tournament on Saturday, holding on for a 3-2 victory over the College of Charleston (3-7-3, 1-3-2 CAA). After an even first half, the Tribe lit up the scoreboard with three goals early in the second half. However, the College then conceded two goals and leaned on some smart defending in the final 10 minutes to come away with the win. With only one game remaining in CAA play, Saturday’s game was a must-win.

After early October losses to league leaders Hofstra (8-6-1, 6-1 CAA) and Elon (7-3-3, 3-1-2 CAA), the Tribe could not afford any more CAA slipups. The College had several chances to open the scoring in the opening period, but some impressive saves from Cougars goalkeeper Kevin Shields maintained the even scoreline.

Within a minute of the second half kickoff, though, the Tribe was in front. Junior forward William Eskay pressured a Charleston center back into a mistake. He collected the ball and ran in one-on-one with Charleston’s substitute goalkeeper, Treston Kederer. Eskay fired across the goalkeeper into the corner for a 1-0 lead and his 5th goal of the season. Now he is just two goals away from matching his total of 7 from last year.

The Tribe did not press its advantage right away, but with the Cougars pushing forward in search of a goal, the opportunity for a counterattack presented itself. Senior forward Reilly Maw played in sophomore forward Ryder Bell, who scored his 8th of the season and extended his edge as the Tribe’s leading scorer. The College’s onslaught continued, as Maw got a goal of his own after a hard-working performance. Maw chased down a long pass from freshman defender Tanner Shane and smashed a shot through the goalkeeper’s legs to push the lead to three. Up 3-0, the Tribe should have been able to engage cruise control.

“It felt like one of our recent games where maybe we’ll get another one and make it comfortable,” Tribe coach Chris Norris told Tribe Athletics.

After getting ahead in recent games against Northeastern (6-9, 3-4 CAA) and Michigan (2-9-4, 1-5-1 Big 10), the Tribe ran up the score with confidence. Saturday’s game, however, did not follow this storyline.

“Unfortunately,” Norris continued, “it wasn’t like that. They did a good job to fight back.”

Only a few minutes after Maw’s goal, Charleston cut into the Tribe lead via forward Nico Rittmeyer’s header. Another period of dominance for the Cougars ended with the College giving a foul away in the box for a penalty kick. Forward Leland Archer dispatched the kick to make the score 3-2 and set up a nervous final 10 minutes for the Tribe.

A few key substitutions, including putting Maw and redshirt senior midfielder Jeff Bombelles back into the game, allowed the Tribe to see out the rest of the game with relative ease. Despite giving up two quick goals, Norris was pleased with the Tribe’s response to adversity.

“For the majority of that 12-minute period [at the end of the game], we did mostly the right things,” Norris told Tribe Athletics. “We tried to have some possession and not get rattled, getting out to deny easy service into our box, and really [redshirt junior goalkeeper] Phil [Breno] didn’t have a whole lot to do in terms of saves tonight.”

“For the majority of that 12-minute period [at the end of the game], we did mostly the right things,” Norris told Tribe Athletics.

Senior forward Maw earned individual recognition after the game, being named CAA player of the week after notching a goal and an assist against Charleston. Maw was also a key figure in last week’s big win over Michigan, with two assists and a goal to his name. The senior is heating up in the right part of the season, as the Tribe faces a must-win test next week against Drexel (1-11-2, 0-6 CAA).

The Tribe hosts regional rival Virginia Commonwealth (5-7-3, 3-2-1 A10) Wednesday, but Norris acknowledged that, inevitably, the focus will be on the CAA finale against last-place Drexel.

“Hopefully we’ll get through [the game against VCU] without issues in terms of injuries, and be at our best when Saturday comes.”

This is a game that the Tribe cannot take lightly; it is neck-and-neck with James Madison (3-9-3, 2-3-2 CAA) for the final CAA playoff spot. If the Tribe beats Drexel, its fate should be in its own hands, but Norris will be eager to have his team firing on all cylinders for the CAA championship. Wednesday’s game against VCU is scheduled for 7 p.m.